20 for 20: Monitoring of the Andean Amazon Project (MAAP) Established 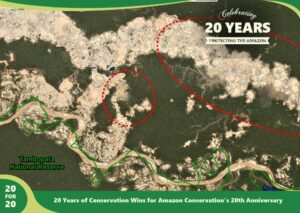 Since the establishment of MAAP in 2015, the program has provided geographic information and evidence of illegal gold mining, deforestation, logging, and more to the public and government officials. MAAP currently monitors 83% of the Amazon rainforest across five countries: Peru, Bolivia, Ecuador, Brazil, and Colombia.

This past summer, in anticipation of the fire season, we’d improved upon our novel MAAP Amazon Fire Tracker App, which recorded over 2,500 major fires across the Amazon. We also provide MAAP deforestation reports directly to government officials who can take action on the ground against the illegal activity, and this information has helped prosecutors stop deforestation in Pariamanu and Chispa, Peru. Additionally, a major success was last year year, when we helped Peruvian government officials in the dismantling of an illegal mining stronghold in La Pampa, Peru causing deforestation in the area to plummet by 90%.