A Journey From Hell to Heaven: A Firsthand Account of Indigenous Communities Living at the Forefront of the Climate Crisis

Editor’s note: This piece is a translated op-ed written by Maria Elena Gutierrez, the Executive Director of our sister organization on the ground in Peru, Conservación Amazónica-ACCA. The original text in Spanish was published on La Mula and can be found here.

Installation of irrigation system in Infierno. Photo by Yessenia Apaza

A few days ago I visited the Indigenous community of Infierno in Madre de Dios, less than an hour from Puerto Maldonado, Peru in the buffer zone of the Tambopata National Reserve. The community’s name in Spanish, “Infierno”, translates to “Hell” in English; according to some it was given by the ancient merchants of the region who navigated the demanding Tambopata River. They would say, “we’re going to arrive in Hell” while maneuvering through two formidable river bends under a scorching sun and insatiable mosquitoes that blinded and overwhelmed them. After a hundred years, albeit without the sailing, but with masks and the blistering heat of 40 ° C (104 °F), its name still seemed appropriate.

María Cordero, the president of the community, along with some of its members, welcomed us and expressed candidly how difficult it is to motivate entrepreneurship in the Amazon because it requires discipline, perseverance and respect for the land. On top of this are the impacts of climate change. The increase in average temperature and prolonged length of the dry season has been affecting agriculture, an economic activity that the majority of people that live there are engaged in.

One way forward has been the shift to agroforestry, since it combines cocoa or Brazil nut trees with annual crops such as banana or cassava in order to guarantee income during the first years of growth of forest species. Similarly, a promising alternative is the installation of irrigation systems and pumping water from the subsoil, but that constitutes thousands of Peruvian soles that makes it inaccessible to everyone. We were concerned because if we did not identify the appropriate approach to guarantee the sustainability of these technologies, the younger generation who moved back to the countryside due to the pandemic would opt for illegal activities.

From Infierno passing through Lima, the capital of Peru, we headed to the imperial city of Cusco, where my colleagues showed me how in the Andean highlands around the Ausangate mountain range, they are experiencing severe water stress due to the accelerated thawing of ice caps and the intensity of dry periods. For example, the Quechua indigenous communities of Phinaya are dedicated to alpaca farming that depend on a specialized ecosystem, the bofedales, which are highland wetlands. 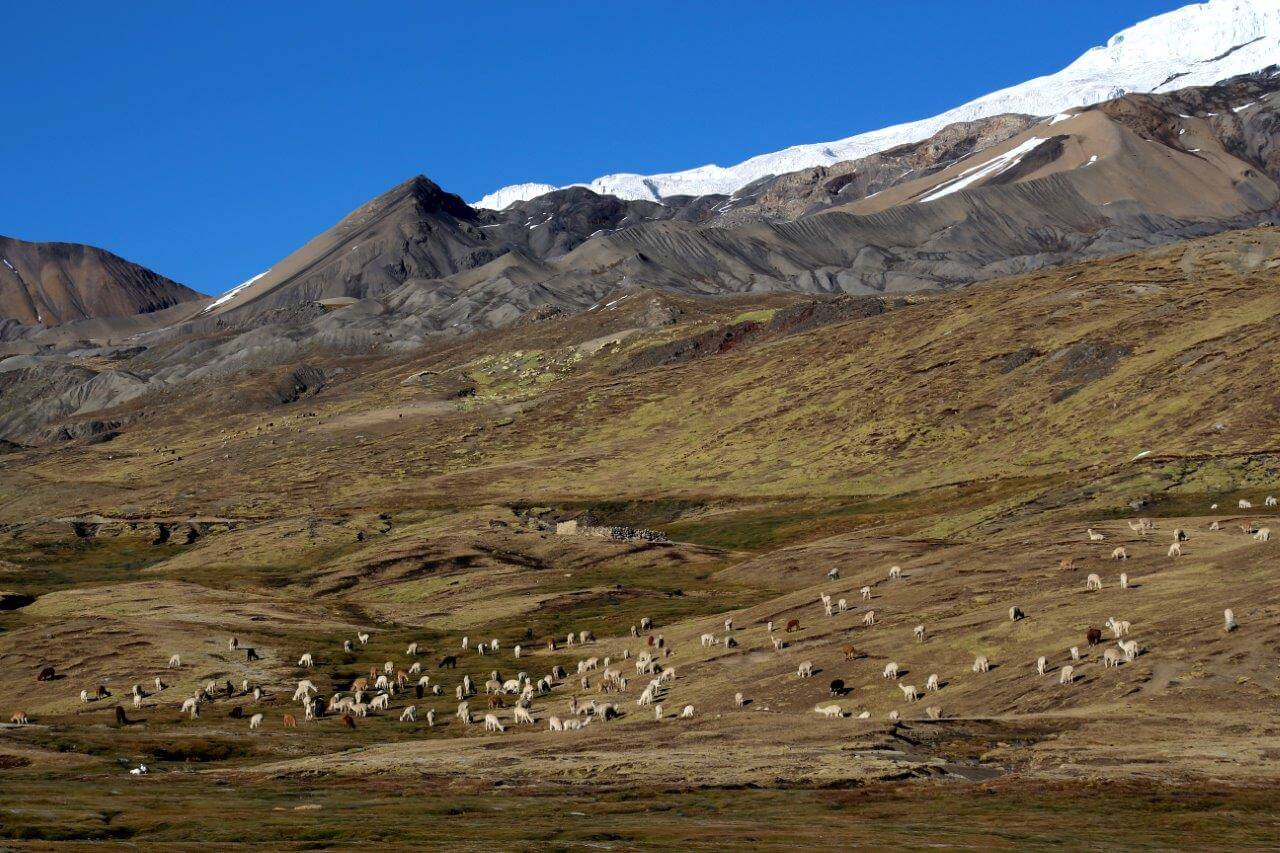 Alpacas grazing at the foot of Ausangate. Photo by Ronald Catpo

Bofedales are wetlands where small vegetation areas or pastures rejuvenate like sponges from rainfall and moisture, and filter the water through the subsoil, forming lagoons and rivers downstream. Once again, we see how global warming is drying up wetlands at very rapid rates. Now there are alpacas that only manage to drink water every three days.

We hope to soon replicate the success of restoring wetlands and the sustainable management of livestock that we experienced in the Japu Indigenous Community, located at 4,700 meters (15,000 feet) above sea level and considered the last Inca stronghold. But if the world does not manage to control its carbon emissions by 2030 and temperature increases more than 1.5 °C since the industrial era, these ecosystems, and the habitats of our Andean siblings, will soon be inhospitable.

The Andes and the Amazon of Peru are home to an unmatched diversity of species and ecosystems, which we still have yet to fully discover, but whose functions generate key services for human subsistence such as providing food, fiber, medicines, crop pollination, water and climate regulation, among others.

This is everyone’s responsibility as we consume products produced as a result of deforestation or, on the contrary, we do nothing to stop the loss of forests, which are our key allies in carbon sequestration and the stabilization of the climate. For the COVID-19 pandemic there is a vaccine, but there is not one for the climate crisis. If we don’t do something soon, we are going to rewrite Dante Alighieri’s work with dramatic scenes from the climate emergency, initially starring the most vulnerable.