Jaguars are without a doubt the top predators in Amazonia, but organisms flying above the canopy certainly have a big advantage and unique predation skills that make them respectable predators when compared to wild cats. Raptors are considered the major predators of new world primates, such as crested eagles (Morphnus guianensis) predation on infant tamarins (Leontocebus mystax & L. fuscicollis) and also squirrel monkeys (Saimiri sciureus); black-hawk eagles are also known to attack howler monkeys; and the largest and powerful harpy eagle (Harpia harpyja) predation on saki, capuchin and night monkeys. Current ecological knowledge of Neotropical raptors is scarce, thus filling in the gaps of information on this particular group of birds will allow us to understand their ecology and general biology, whether it is through anecdotal incidents or observations in the field.

The black-and-white hawk eagle (Spizaetus melanoleucus) is one of the 55 birds of prey found at Los Amigos. Compared to other well-known raptors such as the mighty harpy eagle or the crested eagle, the black-and-white hawk eagle is a small size bird (body mass: 780-1191 g; wingspan: 110-135 cm), feeding mainly on terrestrial and arboreal birds such as tinamous and guans, and some documents report small mammals and reptiles in their diet. However, successful predation on primates by this species was not described until 2014, when a group of researchers witnessed and described the mortal attack of the Rylands’ bald-faced saki monkey (Pithecia rylandsi) at Los Amigos. 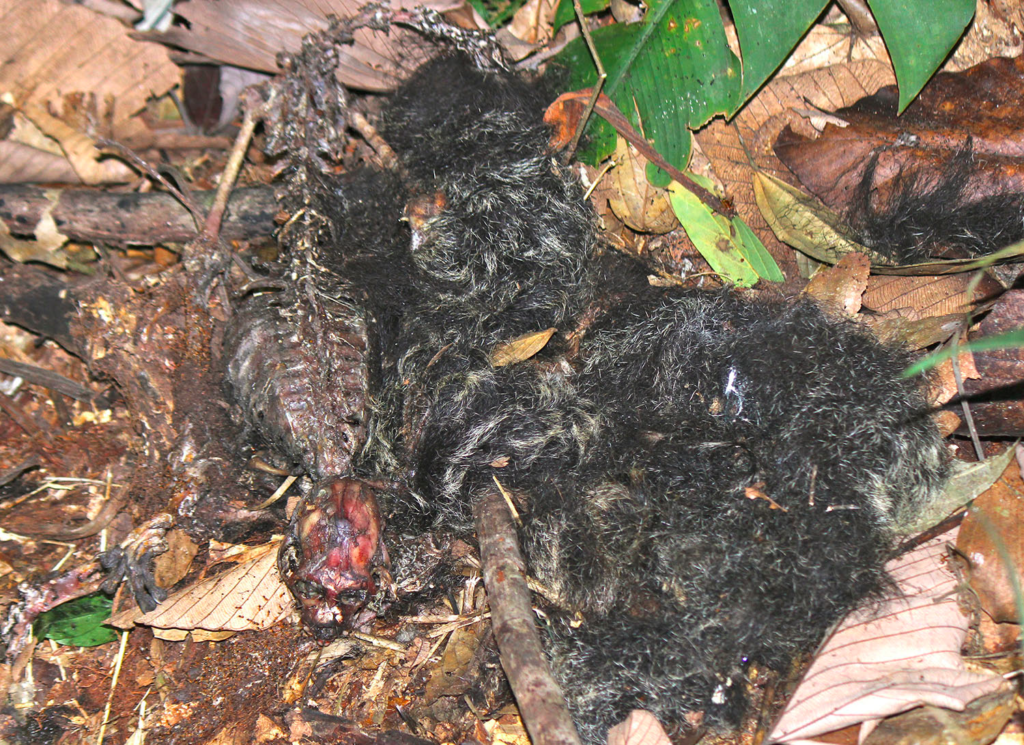 This fatal event was recorded on 23 July, 2014, during a long-term project assessing the anti-predation behavior and alarm calling of P. rylandsi at Los Amigos. While conducting the usual primate behavior monitoring, one of the research assistants heard a large bird flapping, followed by alarming calls of a group of sakis, which are whistle-like calls emitted when they detect an eagle’s presence. Upon the researcher’s return after a couple of hours, he heard wing’s flapping in the same location. After following the motion event, the researcher found out the black-and-white hawk eagle feeding on an adult saki’s carcass on the ground. The black-and-white hawk quickly flew away after detecting the researcher approaching. Most of the saki’s flesh, muscles and skin were removed, with fur scattered beside and along a 16.4 m path away from the carcass. Several puncture holes were noted on the body and skull, while the stomach lay untouched next to the body despite most of the soft tissue having been removed. Although the observers didn’t visually witness the attack, the described observations together with the physical injuries documented on the saki most likely indicate that it was the black-and-white hawk-eagle as its predator.

Black-and-white hawk eagles utilize the “soar and stoop” hunting tactic, compared to the “perch and wait” strategy used by large raptors, consisting of searching for preys above the canopy and forest edges and, upon prey detection, diving rapidly into the forest to attack them. This report suggested that smaller and lesser-known raptors, like the black-and-white hawk eagle, should also be considered important predators of Neotropical primates, principally those that occupy the mid to upper canopy given their hunting strategy. Identifying and providing evidence of predation events like this is key to learn more about less prominent raptors, so keep your eyes and ears open while walking in the forest!