On January 11, 2023, Science Magazine, one of the world’s leading peer-reviewed scientific journals, published an article on the effects of illegal gold mining in rivers around the world, including the Peruvian Amazon.

Legal and illegal gold mining activity has surged over the past 20 years and affects 173 large rivers in 49 countries today. 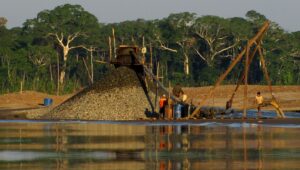 Powerful and massive rivers, like the Amazon, make for excellent natural miners. Every day, thousands of gallons of water constantly erode and take rock away from mountains above the lowlands, liberating precious metals and whisking them downriver to areas like the Madre de Dios region of Peru, a hotspot for both biodiversity and illegal mining. This sediment, oftentimes containing precious metals, is deposited among riverbeds and floodplains where miners then set up extractive operations.

These artisanal operations to extract gold and other riches from river sediments are poisoning waters and harming aquatic and human life in the affected communities. A recent study by Evan Dethier, Miles Silman, et al., shows that levels of suspended sediment have doubled, compared with pre-mining levels, in some 80% of the rivers. In total, almost 7% of all large tropical river stretches are now cloudy with mining debris. “It’s completely flown under the radar,” says Miles Silman, former Board Member of Amazon Conservation and coauthor of the study. “The pervasiveness was really shocking to me. It’s just nuts.” 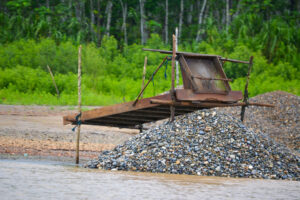 Gold miners in Madre de Dios use small-scale techniques, not unlike prospectors of the 1800s. However, to more easily collect large nuggets of precious metals, including gold, from the sediment they take out of the Amazon tributaries, they add mercury, a toxic liquid metal that binds with gold and allows the less valuable settlement to fall back into the river – along with the poisonous mercury.

The operations may be small-scale but it is the number of these operations occurring that is alarming scientists and endangering ecosystems that depend on these rivers. Up to $3 billion in gold is thought to be exported each year from Madre de Dios alone. Gold mining is now the world’s top source of mercury pollution, emitting more than coal-fired power stations. “In the general picture, it has gotten worse by the day,” says Enrique Ortiz, co-founder of Amazon Conservation.

However, Enrique Ortiz adds, “there is a silver-lining thanks to the raised awareness of the dangers presented by these operations. Whereas the source and legality of gold is hard to trace once it goes to market, heavy machinery—and the fuel it needs—can be tracked and controlled,” presenting a regulatory opportunity that could bring an end or at least a significant impediment to these extractive mining operations.