Overgrazing and burning has significantly reduced high-elevation forests throughout the Peruvian Andes, posing a threat to the endemic species that call these cloud forests home, such as the Andean bear. This bear, also called Spectacled bear, is Latin America’s only native bear species and plays a critical role in the health of the Amazon by naturally dispersing seeds. However, this species has been deemed a vulnerable species by the IUCN Red List, so protecting their homes is of utmost importance — especially now, as climate change compounds these effects by driving more species upward in search of cooler and wetter conditions, which in turn reduces food sources for the bears even further.

To develop the baseline conservation status of Andean bears in the upper Manu region, we installed 30 camera traps on the trails of our Wayqecha and Manu (previously called Villa Carmen) Biological Stations. Andean bears are easily recognized by their face markings that are unique to each individual, similar to a human fingerprint. 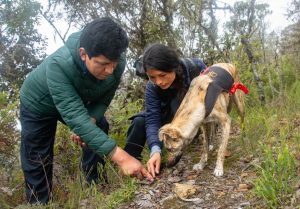 Leading our field activities for this project at Wayqecha Conservation Hub is Ruthmery Pillco, an Indigenous Peruvian botanist from a village outside of Cusco and a trilingual speaker of Spanish, English and Quechua. Field research is also being supported by Ukuku, our new conservation working dog, whose name comes from the Quechua word “bear”. Ukuku was rescued and trained in scent detection, and with her help, the team has found scat samples from three bears in the field. From the samples, we have been able to determine what the bear consumed, and samples were taken for future DNA analysis.

Through interviews with local communities and field assistants, as well as an in-depth literature review, we identified 60 species of plants consumed by the Andean bear in the region. Of these 60 species, we have learned that the bear prefers those in the Bromeliaceae (14) and the Ericaceae (10) botanical families. Based on this data, 15 species of trees and shrubs were selected to be propagated in our large native tree nursery. A total of 22,000 seedlings of the bear-favorite species identified above will be nurtured and grown here to 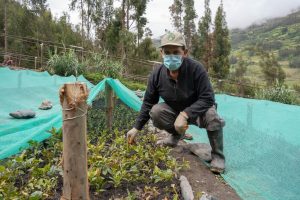 prepare them for final planting in the reforestation areas.

To determine where the reforestation areas would be, we identified a total of 50 acres of forests degraded by unmitigated agricultural expansion and fires in two Andean highland communities: Juan Velasco Alvarado and Jajahuana. Since then, reforestation efforts in these areas have begun through community-led efforts, and will continue to take place in the appropriate planting seasons up until January 2022.

Lastly, given the cultural significance of the bear, we developed four radio spots in Spanish and Quechua to broadcast on local radio stations. Without reliable access to internet and cell phones, radio is still the best means of communication in highland communities. The length of these radio spots range between two to five minutes, and are being broadcast every day on two regional stations. The messaging of these radio spots covers many topics to raise awareness of conservation best practices, such as the prevention of forest fires, the importance of planting and not cutting down native trees, the Andean bear’s key ecological role in the health of the forest, and the ecosystem services provided by the forest thanks to Andean bears.

Moving forward this year, we’ll conduct 50 more interviews with local and indigenous peoples to gather their traditional knowledge on the behavior of the bear in this region, and continue our community reforestation efforts to safeguard the habitat of this important species.

Special thanks to the Stadler Family Charitable Foundation and the International Conservation Fund of Canada (ICFC) for making this project possible.