If you find yourself in the rainforest, it is almost impossible to miss the endless organized columns that army ants form. This group of ants are carnivorous and forage in swarms, raiding everything in their way. If you are not fast enough, you will fall prey to these voracious predators no matter how big you are. If you do outrun them, there are different predators waiting to trap you. Even if you are not an expert birder you probably have heard of Antbirds. This insectivorous group of birds belongs to the family Formicariidae and forage by following army ants. Eciton burchelli and less often Labidus praedator are the species of army ants that Antbirds follow. As simple as this may seem, the relationship is more complex than it sounds, as not all Antbirds are obliged to follow ants. 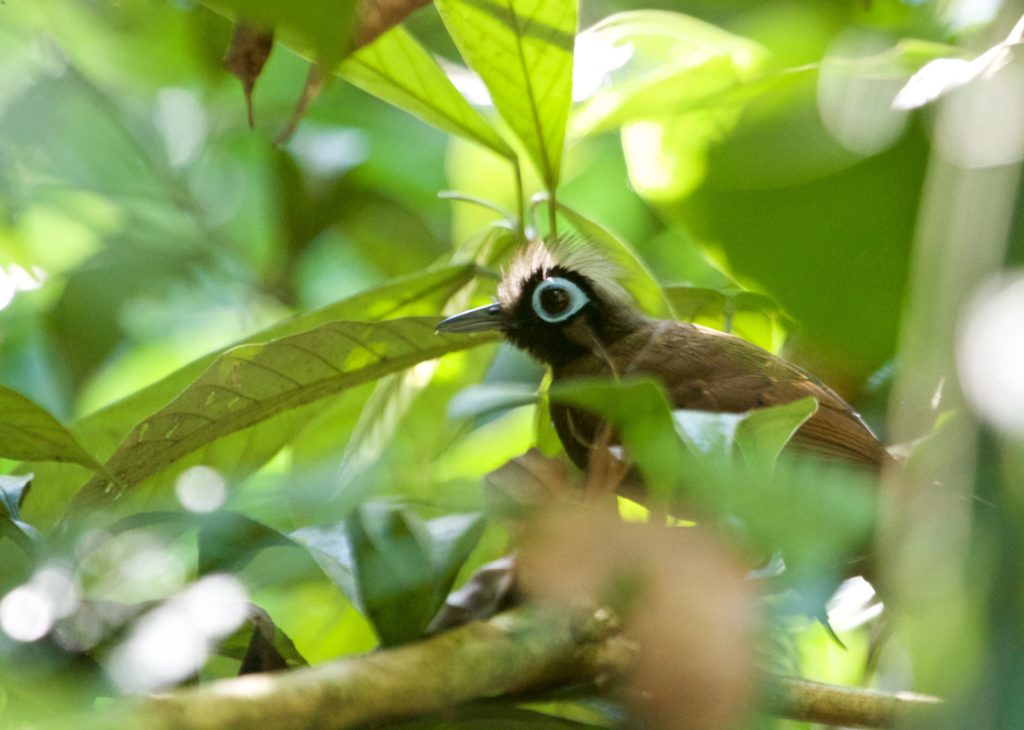 This foraging behavior has no counterpart outside the tropics but within them, you can find ant-followers in different altitudes and elevations. Different species attend the raids with different frequencies. The species that regularly attend them and that in some cases depend entirely on the raiding to find their food are known as obligate, or true, Antbirds. A different name is given to the birds that follow the swarms but are also capable of foraging independently of them, they are referred to as regular followers. Lastly are the opportunistic followers, the species that are only seen foraging when the swarm crosses their territory, for which up to 70 species have been identified. In this grouping, there are some non-insectivorous species that opportunistically take advantage of the raid.

Obligate Antbirds, exclusively found in the Amazon region, are limited to the family Thamnophilidae, also known as typical Antbirds. 16 species have been recorded that completely depend on army ant swarms. They depend on army ant raiding swarms to such a degree that in patches of isolated forest where army ants disappear, the Antbirds are gone within a short period of time.  The hairy-crested Antbird (Rhegmatorhina melanosticta), a not easily seen Los Amigos resident, is an example of an obligate Antbird that depends solely on army ants year-round and can be seen in Terra Firme perching low to the ground feasting at the army ants expense.

Following the raids can provide more food than one individual can eat. But for obligate Antbirds, having developed such specialized foraging behavior has its shortcoming. The frequency, abundance, and distance away from their meals depend on the life cycle of army ants. Their life cycle alternates between periods of mobility and stillness, which makes their presence and location in a forest patch unpredictable. Due to army ants’ mobility, their nests are not as you may imagine. They don’t build a nest to live in; rather they sleep in bivouacs. Bivouacs are living ball-shaped nest made out of the workers that protect the queen and her brood.  They alternate between periods of low food ingestion needs and periods of activity every three-weeks, raiding to meet the food requirements of newly born larvae Because of the periods of ants’ stillness, obligate Antbirds have to wander off outside their home range looking for swarms to follow, as a result, they haven’t developed a strict territorial behaviour. In this case, evolution has favored birders; within a swarm raid you can observe several individuals of the same and different species. Make notice that individuals will defend their place along the raid, the closer to the front and the center they get the better the prey they could trap.

If you’re interested in birds, the next time you come to the tropics you might want to go for an early hike and look for the columns of army ants. If you wait patiently, you will be amazed by one of the greatest performances in the rainforest and see several species of highly adapted birds along the way.