Each and every one of our supporters have a favorite project or initiative that brings them to Amazon Conservation and gets them excited about protecting the Amazon. With a broad portfolio of work spanning wildlife, landscapes, science, people, and technology, it’s hard not to find a piece of our work that resonates with you. And for some of our long-time donors, the all-encompassing nature of Amazon Conservation’s work and the real impact of our small organization on the ground is what keeps them as part of our community.

Connie and Jeff Woodman have been active supporters of Amazon Conservation since 2010. The seeds of conservationism were planted when an old birding book met an aptly-timed camping trip in Big Bend National Park; the seeds began to bud as they became more dedicated birders and eventually met one of Amazon Conservation’s co-founders, Adrian Forsyth. Since then, Connie and Jeff have nurtured a growing appreciation for the importance of protected areas, not only for their birding hobby but also for the well-being of wildlife and people. Over the years, they have become more than lifelong supporters; they are an integral part of the family that is making sure that Amazon Conservation has boots on the ground for the long term.

Read on to learn more about why Connie and Jeff support Amazon Conservation. 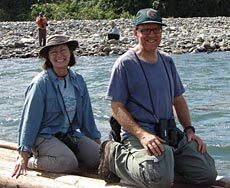 Connie and Jeff on a balsa raft in the Peruvian Amazon

Can you tell us a little background about yourselves? How did you initially learn about Amazon Conservation?

Connie: We spent our honeymoon in Big Bend, in a tent. We’re birders. That’s one of the ways we became interested in conservation. So we like to go birding, and we’re thinking, we’ve got to do more than just going around looking at birds, so we became interested in conservation. Jeff started out on the board of ABC—American Bird Conservancy, so we learned quite a bit with that organization.

Jeff: And then we met Adrian [Forsyth] through [ABC]. ABC had a trip down to Costa Rica, so we went and met Adrian. His charisma inspired us to join him and others on a trip to Peru, and that’s when we got introduced to Amazon Conservation. He can inspire people.

Connie: Hard to say “no” to that much enthusiasm and knowledge; it’s just incredible all those stories!

When did you get into birding? What initially inspired you to support environmental causes generally?

Jeff: We got into birding on our honeymoon; Connie brought a really old bird book. We’d been interested, but we were in Big Bend without realizing it was early May when all the birds were migrating through. It was so cool. So we had this old bird book…

Connie: …and sharing a tiny little pair of binoculars. Some person we met said, “that’ll change”.

Jeff: And then we got back to Houston, and people were saying Houston is a great place to bird right on the Texas coast. So we went down to High Island in July, not realizing… we were like, “where are all the birds?” We only saw a kingfisher. But, that got us thinking about conservation. We didn’t realize it before, but if you’re birding on the Texas coast where millions of birds are flying across the Gulf of Mexico from the tropics, there are so few places for them to stop over. There are people that had the foresight to protect these areas.

Connie: Like Houston Audubon was doing that, right on the coast where we were birding. We joined them, then we realized the importance of conservation. If we don’t take care of these [birds], we’re not going to be able to go birding and from that, we realized we can’t just care about a bird. We have to care about the insects and the butterflies and the plants and the PEOPLE! That was a really big thing with Amazon Conservation because when we were down there on that trip [in Peru], we were introduced to the Wachiperi…

Jeff: …near Villa Carmen, a community where people were logging and trying to get titles to their land. That was an experience we’d never had, meeting them, and it was really interesting. It seemed like there had been a lot of projects with Amazon Conservation over the years, but we really felt—and feel—like Amazon Conservation is trying to obviously protect areas in the Amazon, but doing it by working with these communities, with local people, trying to empower them and make it easier for them to live on the land, get an income from that, and they try to come up with creative solutions to do that. And just the staff too, the people working for the organization, as I’m sure you see, and in Peru and in Bolivia, people care, they’re working hard. It’s an inspiring group to be a part of.

Jeff: Connie didn’t go, but I did go to Bolivia, and that was an amazing trip. We went from Peru, took a boat into Bolivia with Marcos Teran and Lucio, and we met and stayed with people from the Tacana indigenous group living in a large area in northern Bolivia. Their primary means of income is harvesting Brazil nuts. It was really cool because Marcos had had a number of meetings with them, asking them what they need, rather than us trying to impose [by saying], “Here’s what you should do.” What they needed was this form of a drying rack to dry the Brazil nuts because what they had been doing was collecting and carrying these heavy bags and putting these bags down outside, and the harvest happens during the rainy season, so they’d lose 15% of all this harvest through spoilage. So Amazon Conservation raised money for them to get materials to build an open-air barn, but smaller, where they could lay out the Brazil nuts so that they could dry. And the production loss dropped to almost 0%. So more money for them, and it was generated by their thinking. There’s a lot more to the story, but it’s really interesting.

Connie: I think you got to go out with them and try to carry one of those bags.

Jeff: I was with them when they were harvesting. Seriously, they’re built like wrestlers, really muscular, maybe 5’4”, not really tall, but they would carry these bags that could be 130 lbs, really heavy and carrying them up and down the terrain, which is not flat, up and down hills and through mud. They just did it, and they did it for generations. So it felt meaningful to do something that could help the community and the community’s livelihood depended on harvesting Brazil nuts—and Brazil nut trees are a keystone species. So protecting the forest helps both the Tacana and obviously works to protect the Amazon.

Connie, do you have a favorite program or initiative of Amazon Conservation?

The other thing is the MAAP program where they use drones to monitor deforestation. I think that is hugely important, to know when fires are breaking out, illegal logging, and gold mining too. And I think they’ve earned a lot of respect from the government too.

Jeff: We feel like the donations are being put to good use, that is the bottom line; the way the organization works with communities, protecting the forest, and a lot of different things that Amazon Conservation does. It’s not just a one-style approach. They’re trying to study the areas, use research to determine what kind of strategies work best to conserve a certain area. You have a cloud forest, you have the lowlands, you have now in Bolivia the Beni, which is a whole different type of habitat, requiring lots of ranchers. So they’re really trying to figure out the best ways to conserve an area. And I think they’re lean.

Connie: That’s what I was going to say. I feel like it’s kind of like a personal organization. We know some of the people, we’ve been down there, and it’s not like we’re donating to an organization that’s so huge.

Jeff: You can see the benefits of a donation. Trying to conserve the Amazon, it’s a huge problem.But I feel like Amazon Conservation is trying to identify areas where they can effect change.. They’re getting partners who can donate, partners who can help with research, partners on the ground. I think they’re doing a good job.

Why is continued support important for conservation efforts and ongoing, local projects in the Amazon?

Jeff: I mean, serving the Amazon is a long-term proposition. You can’t expect to go in for one, three, five years. Five years maybe you can get things going in an area, but you have to be in for the long term. That’s been a core belief of Amazon Conservation, to be there for the long term. In certain areas, like a new area in Peru,  you can’t just drop in and start working in an area. You have to build trust, and that takes years. But once you get trust, that trust can filter through to different areas and you get a reputation of trying to do good work and doing the things that you say. Gaining and building trust with communities makes all the difference.

Is there something you want to say to someone who wants to get involved and make a difference in the Amazon and/or in general to help fight climate change?

Connie: I would tell people first and foremost how much we feel like a family with Amazon Conservation. I think that if I was a new donor, I would want to reach out to whomever and let them tell me more about it, rather than just your webpage. I think that you guys are responsive to questions from new and even older donors. You guys really know how to stretch a dollar and put it to good use.

Jeff: I would also add, for a new donor wondering, “is this going to make a difference?” Pick a program or something that seems interesting to them that can benefit, because there are a number of programs and areas, from indigenous people, sustainability, trying to improve livelihoods, the many programs you have. Someone could donate something to one of those and see the impact, see what’s happening, and ask staff for updates. For us, you learn a bit about what’s going on and what’s happening, and the feeling that a donation is making a difference is important and for us, that’s meaningful. Like Connie was saying, as opposed to: you just donate, you don’t really know what’s going on, you hope it’s doing good, but you don’t know. But here [with Amazon Conservation], you can see how your donation is making a difference.

Do you have anything else to add that you’d like people to know?

Jeff: I feel like it’s a good organization, the Board is excellent, and people care! 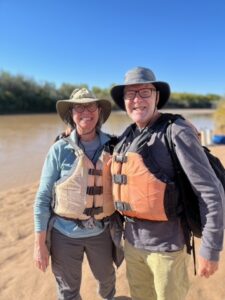 Check out the real impact our supporters are having in the Amazon, learn more about our long-term strategy from our 10-year strategy for 2020-2030, and help support this critical work by making a contribution today!