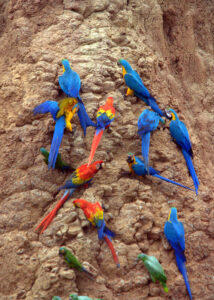 The 679,040-acre Tambopata National Reserve in the Amazon Basin of southeast Peru was established in 2000 to protect one of the most biologically diverse and least disturbed forests in the world. A myriad of species live in the diverse habitats of the reserve, including colorful parrots and macaws that frequent clay licks such as the famous Colpa de Colorado. But although the reserve is under government protection, miners continuously threaten the area and its buffer zones to tear down tracts of forest and sift gold from riverbeds.

Thus, our on-the-ground sister organization in Peru, Conservación Amazónica-ACCA, in partnership with local governments and officials, are developing a strategic land use plan for Tambopata National Reserve (PEZA) and its buffer zones to improve land management, increase interagency coordination within the Peruvian Government, and provide economic benefits to local communities. The first meeting was on May 26, held by a Working Group whose goal is to ensure the execution of activities. The group that has been formed is working to implement the strategic land use plan, as well as achieve its incorporation in the regional government.

Protecting the Tambopata National Reserve and its buffer zones is essentials due to the wide variety of plants, animals, and people who call it home, including economic forest species such as cedar (Cedrela odorata), mahogany (Swietenia macrophylla), and Brazil nuts (Bertholetia excelsa). Moreover, researchers have documented large numbers of species within the protected area that aren’t seen as commonly elsewhere in the Amazon due to poaching, such as spider monkeys and tapirs. The Tambopata River watershed is also considered to be one of the world’s richest ecosystems in terms of biodiversity — in an area of just 1,300 acres (550 hectares), researchers have documented 91 species of mammals, 570 birds, 127 reptiles and amphibians and 94 fish.