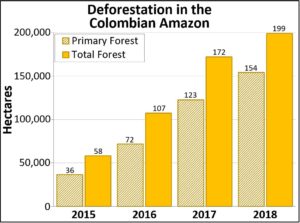 We continue our focus on the northwest Colombian Amazon,* one of the most intense deforestation hotspots in the western Amazon (see MAAP# 100).

Here, we analyze deforestation data over the past five years (2015-19) to better understand current trends and patterns.

One of the main deforestation drivers in the region is conversion to pasture for land grabbing or cattle ranching.

Next, we provide a real-time update of 2019, based on early warning forest alerts (GLAD alerts) from the University of Maryland/Global Forest Watch), updated through July 25, 2019. 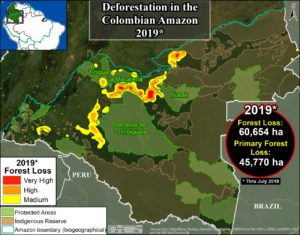 Next, we detail the recent deforestation in these four protected areas of the Colombian Amazon, including the presentation of a series of satellite-based images.

*There are other protected areas in the Colombian Amazon with recent deforestation (such as Picachos and La Paya National Parks), but here we focus on the four with the highest deforestation thus far during 2019.

We conducted a deforestation analysis within the 4 protected areas noted above (Chiribiquete, Tinigua, Macarena, and Nukak), generating the following key results: 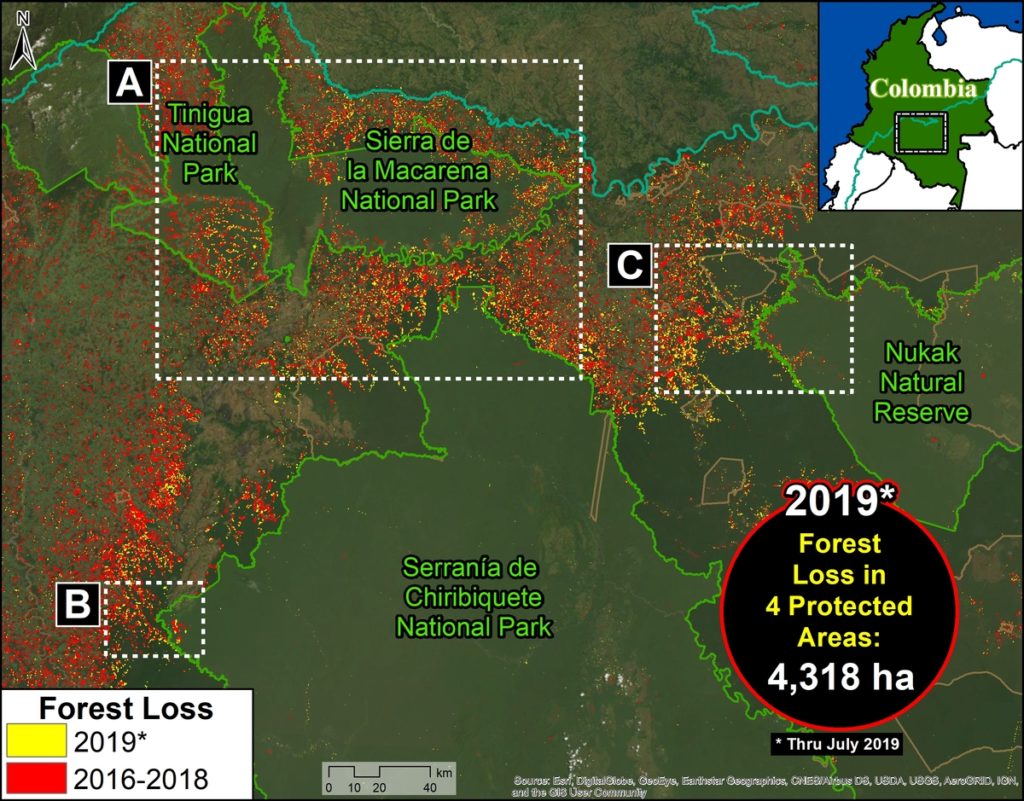 Zoom A: Deforestation in Tinigua, Chiribiquete, and Macarena National Parks 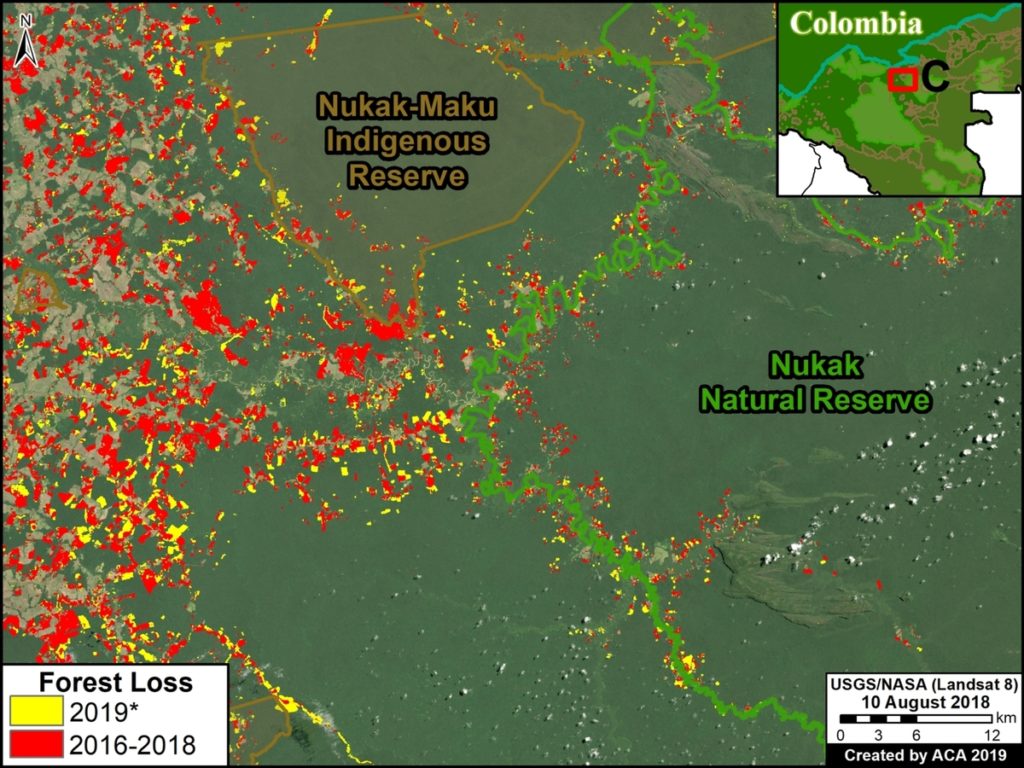 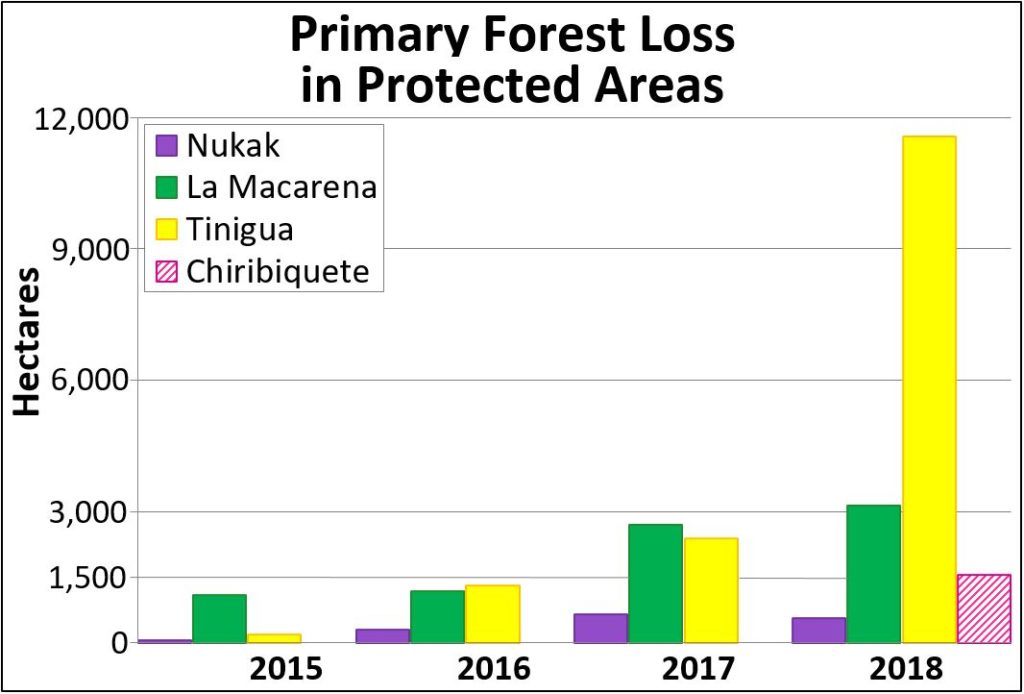 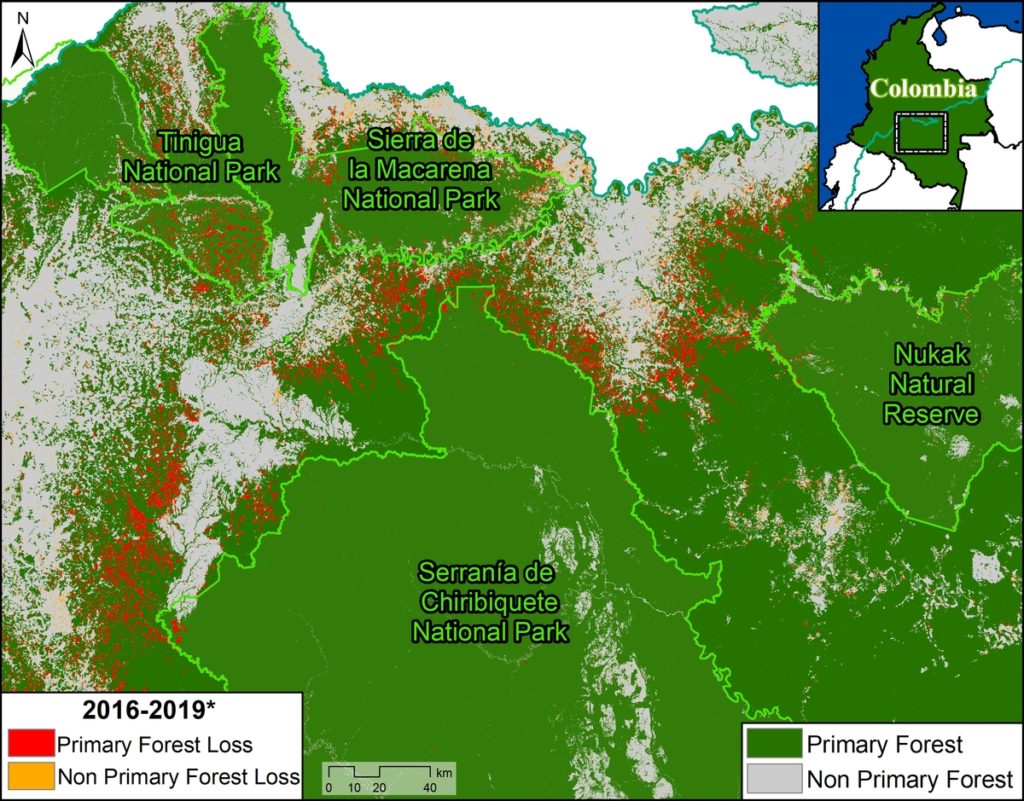 We primarily used data generated by the GLAD laboratory of the University of Maryland, available on Global Forest Watch. This data is based on moderate resolution Landsat imagery (30 m). For 2017-18, we analyzed annual data (Hansen et al 2013), and for 2019 we analyzed GLAD alerts (Hansen et al 2016).

For our deforestation estimates, we multiplied the annual “forest cover loss” data by the density percentage of the “tree cover” from the year 2000 (values >30%). Including this percentage allows us to look at the precise area of each pixel, thus improving the preciseness of the results.

We define primary forest as “mature natural humid tropical forest cover that has not been completely cleared and regrown in recent history,” following the definition from Turubanova et al 2018. For our primary forest deforestation estimates, we intersected the forest cover loss data with the additional dataset “primary humid tropical forests” as of 2001 (Turubanova et al 2018). For more details on this part of the methodology, see the Technical Blog from Global Forest Watch (Goldman and Weisse 2019).

All data were processed under the geographical coordinate system WGS 1984. To calculate the areas in metric units the UTM (Universal Transversal Mercator) projection was used: Colombia 18 North.

To identify the deforestation hotspots in the Base Map, we conducted a kernel density estimate. This type of analysis calculates the magnitude per unit area of a particular phenomenon, in this case forest cover loss. We conducted this analysis using the Kernel Density tool from Spatial Analyst Tool Box of ArcGIS. We used the following parameters:

We thank R. Botero (FCDS), A. Rojas (FCDS) y G. Palacios for helpful comments to earlier versions of this report.