We present a first look at the major hotspots of primary forest loss across the Amazon in 2020 (see Base Map).* 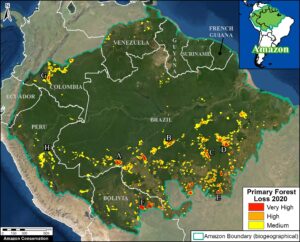 Base Map. Forest loss hotspots across the Amazon in 2020. Data: UMD/GLAD, RAISG, MAAP. The letters A-G correspond to the zoom examples below.

There are several major headlines:

Below, we show a striking series of high-resolution satellite images that illustrate some of the major deforestation events across the Amazon in 2020 (indicated A-G on the Base Map).

Widespread Deforestation in the Brazilian Amazon

Zooms A-C show examples of a troublingly common phenomenon in the Brazilian Amazon: large-scale deforestation events in the first half of the year that are later burned in July and August, causing major fires due to the abundant recently-cut biomass. Much of the deforestation in these areas appears to associated with clearing rainforests for cattle pastures. The three examples below show the striking loss of over 21,000 hectares of primary forest in 2020.

Forest Fires in the Brazilian Amazon

In September, there was a shift to actual forest fires in the Brazilian Amazon (see MAAP #129). Zoom D and E show examples of these major forest fires, which burned over 50,000 hectares in the states of Pará and Mato Grosso. Note both fires impacted indigenous territories (Kayapo and Xingu, respectively).

Forest Fires in the Bolivian Amazon

The Bolivian Amazon also experienced another intense fire season in 2020. Zoom F shows the burning of a massive area (over 260,000 hectares) in the Chiquitano dry forests (Santa Cruz department).

Arc of Deforestation in the Colombian Amazon

As described in previous reports (see MAAP #120), there is an “arc of deforestation” concentrated in the northwest Colombian Amazon. This arc impacts numerous protected areas (including national parks) and Indigenous Reserves. For example, Zoom G shows the recent deforestation of over 500 hectares in Chiribiquete National Park. Similar deforestation in that sector of the park appears to be conversion to cattle pasture.

Deforestation in the central Peruvian Amazon

The analysis was based on early warning forest loss alerts known as GLAD alerts (30-meter resolution) produced by the University of Maryland and also presented by Global Forest Watch. It is critical to highlight that this data represents a preliminary estimate and more definitive data will come later in the year. For example, our estimate does include some forest loss caused by natural forces. Note that this data detects and classifies burned areas as forest loss. Our estimate includes both confirmed (1,355,671 million hectares) and unconfirmed (751,533 ha) alerts.

Our geographic range is the biogeographic boundary of the Amazon as defined by RAISG (see Base Map above). This range includes nine countries.

We applied a filter to calculate only primary forest loss. For our estimate of primary forest loss, we intersected the forest cover loss data with the additional dataset “primary humid tropical forests” as of 2001 (Turubanova et al 2018). For more details on this part of the methodology, see the Technical Blog from Global Forest Watch (Goldman and Weisse 2019).

We thank E. Ortiz (AAF), M.E. Gutierrez (ACCA), and S. Novoa for their helpful comments on this report.