Some illegal gold mining, however, has moved to several new hotspots (Image 1), although at much lower levels. 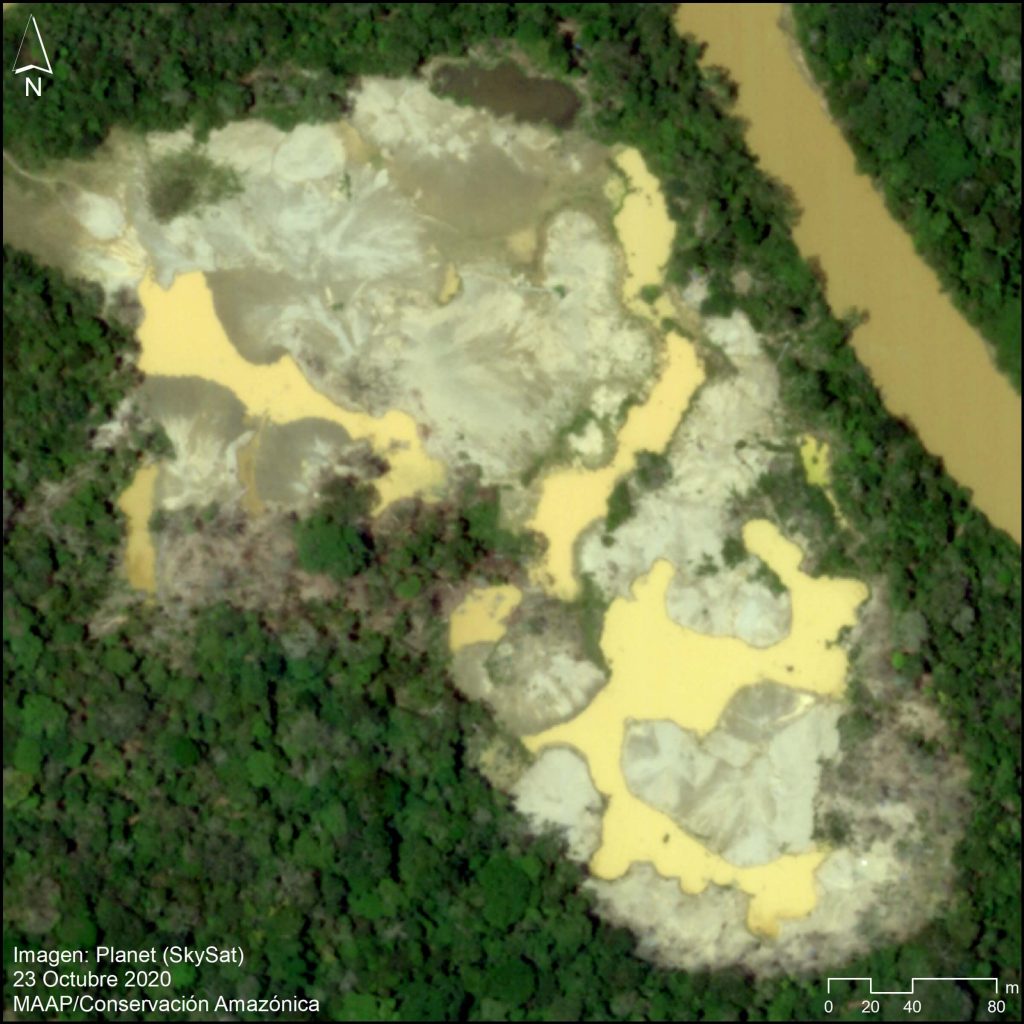 The most emblematic hotspot is located along the Pariamanu River, northeast of La Pampa in the Madre de Dios region (see Base Map, below).

This mining activity is clearly illegal because it is located within Brazil-nut forestry concessions, and is outside the permitted mining zone (commonly called the “mining corridor”).

Fortunately, a series of timely actions by the Peruvian Government has minimized the irreversible damage along the Pariamanu (see below).

The objective of this report is to present Pariamanu as an emblematic case that links technology with the rapid response action of public entities to address illegal activity in the Amazon.

It also represents a concrete case of strategic collaboration between civil society and the government to try and achieve zero illegal deforestation (and avoided deforestation). 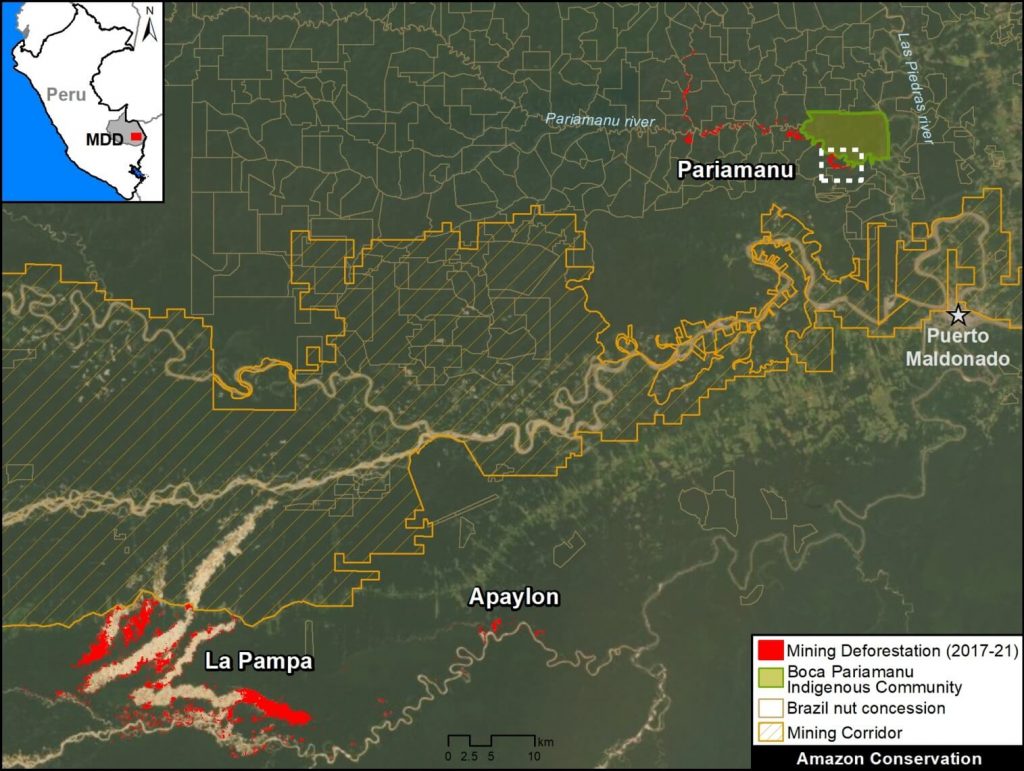 Base Map. Illegal gold mining deforestation along the Pariamanu river, in the context of La Pampa. Data: MAAP.

The Base Map shows the location of illegal gold mining along the Pariamanu River, in the southern Peruvian Amazon (Madre de Dios region).

For context, La Pampa (the previous epicenter of illegal mining) and the regional capitol city of Puerto Maldonado are inlcuded. We also show another new illegal mining hotspot next to La Pampa, known as Apaylon.

In total, we have documented the deforestation of 204 hectares (504 acres) of primary forest caused by illegal gold mining in Pariamanu since 2017, indicated in red.

Note that this deforestation is located within Brazil nut forestry concessions and outside the “mining corridor,” thus clearly indicating its illegality.

We present a satellite image video showing an example of illegal gold mining in the Pariamanu area. These images show the deforestation of 71 hectares (175 acres) between 2016 (first image) and 2021 (last image), in the area indicated by the white inset box in the Base Map above. Note that each image is from July of each year (2016-20), with the exception of 2021 which shows January and March. 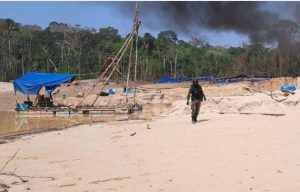 The first MAAP report about Pariamanu was published in November 2016, where we described “the start of mining in a new area” (MAAP #50). We found the mining-caused deforestation of 69 hectares (170 acres) on the banks of the Pariamanu river.

In January 2020, we published the second MAAP report about Pariamanu, documenting that the mining deforestation increased to 99 hectares (245 acres) (MAAP # 115). In this report, we warned that there were indications that some miners displaced by Operation Mercury (in February 2019) have moved to this area.

In response to this situation, the Peruvian Government, led by the Special Prosecutor for Environmental Matters (known as FEMA), carried out a series of field operations in 2020 (May, August and September, respectively), as an extension of Operation Mercury focused on cracking down on the illegal mining in Pariamanu.

The operations were effective in destroying mining equipment and sending a strong message that the government was engaged in this area.

However, we found that gold mining deforestation continued in several small areas between October 2020 and March 2021 (see Image 2), reaching the new total of 204 hectares (504 acres).

Fortunately, the government continues to respond effectively. Most recently (March 19, 2021), FEMA and the Peruvian Coast Guard carried out a new operation in Pariamanu, finding an illegal mining camp and equipment.

As mentioned above, the objective of this section (and this report) is to present Pariamanu as an emblematic case that links technology with the rapid response action of public entities to address illegal activity in the Amazon. It also represents a concrete case of strategic collaboration between civil society and the government to try and achieve zero illegal deforestation (and avoided deforestation). 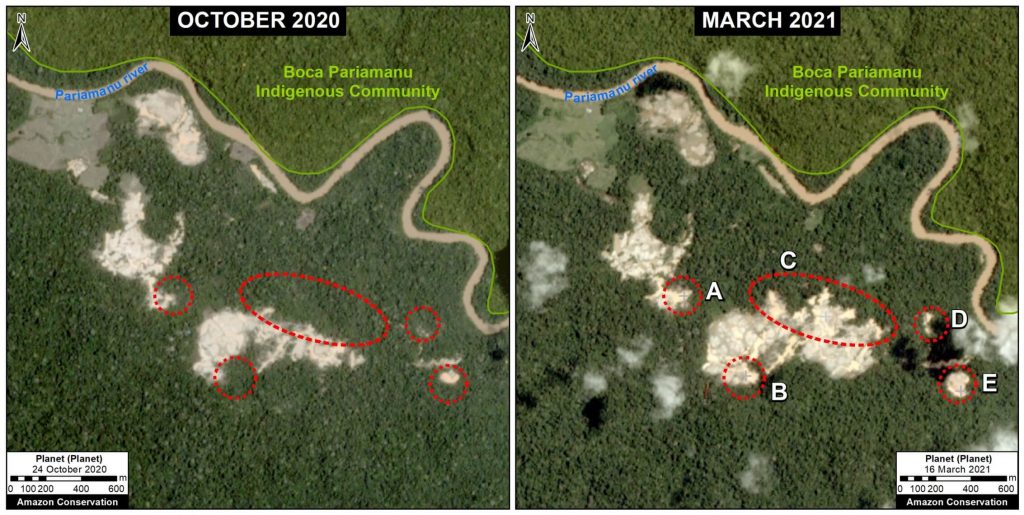 This report was conducted with technical assistance from USAID, via the Prevent project. Prevent is an initiative that is working with the Government of Peru, civil society, and the private sector to prevent and combat environmental crimes in Loreto, Ucayali and Madre de Dios, in order to conserve the Peruvian Amazon.