Here we present a first look at 2020 deforestation of primary forest in the Colombian Amazon, in relation to the new published annual data for 2019.* 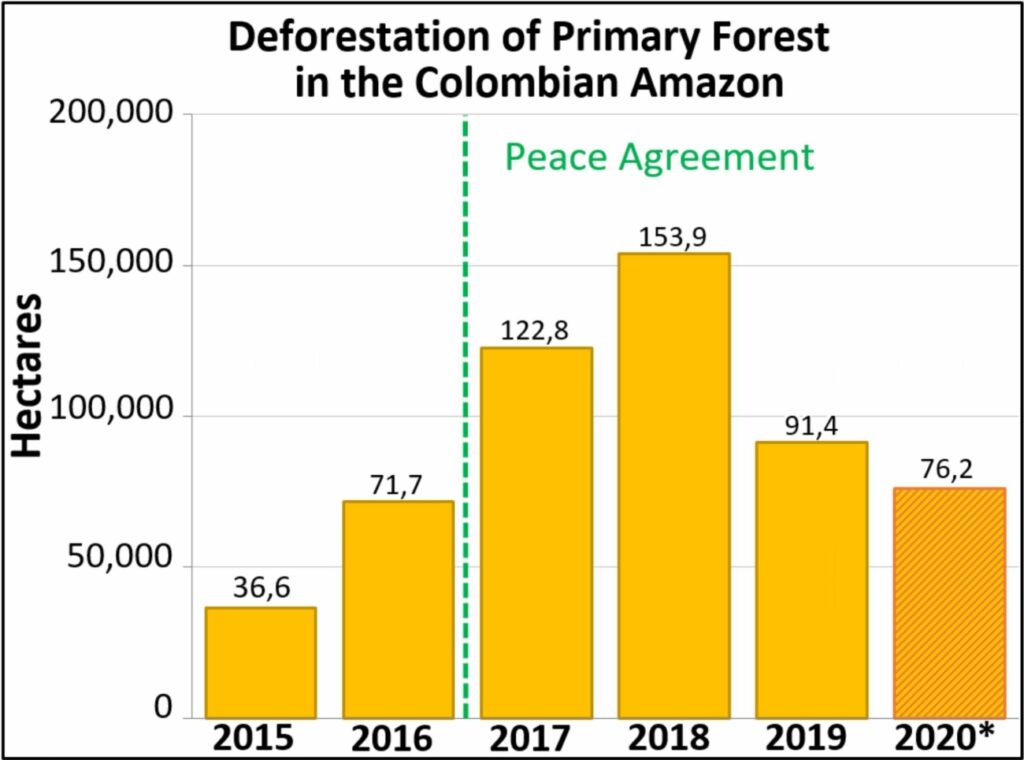 Table 1. Deforestation of primary forest in the Colombian Amazon, 2015-20. Data: Hansen/UMD/Google/USGS/NASA, UMD/GLAD. *Until May 2020

Table 1 shows the recent trend: a major deforestation spike following the 2016 peace agreement (between the Colombian government and the FARC) with a peak in 2018, followed by a major decrease in 2019.

Note that we have documented the deforestation of 444,000 hectares (over a million acres) of primary forest in the Colombian Amazon in the past four years since the peace agreement. 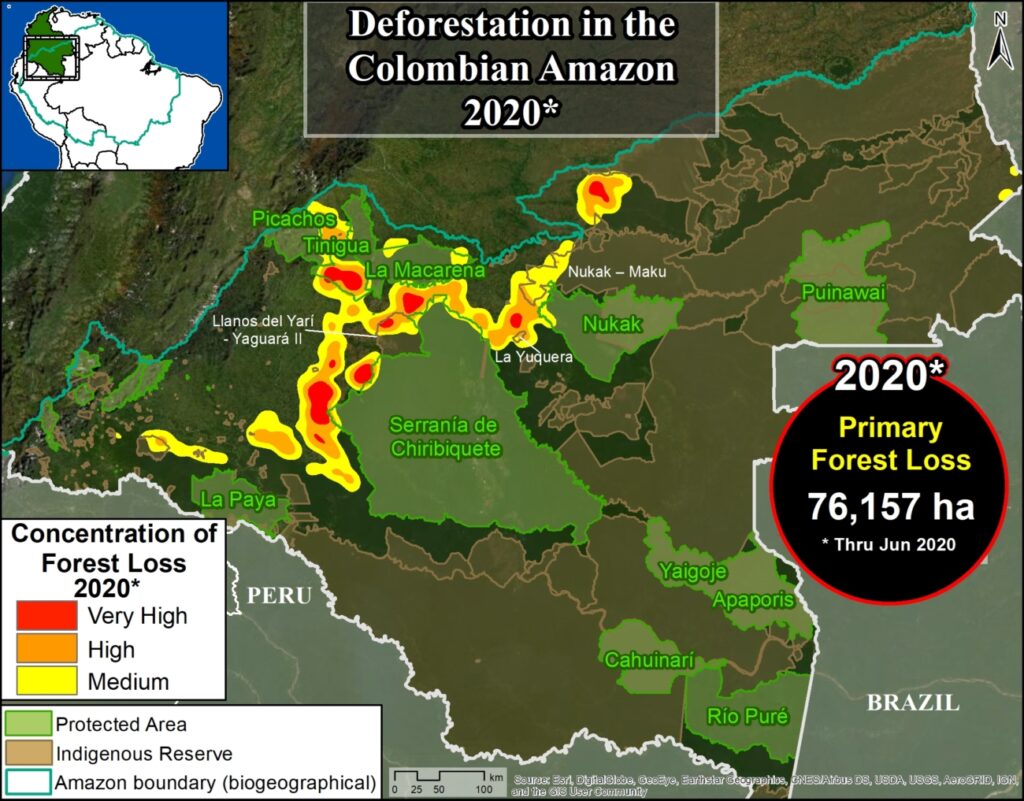 Base Map. 2020 Deforestation hotspots in the Colombian Amazon. Data: UMD/GLAD.

The Base Map shows the 2020 deforestation hotspots.*

As in previous years, they are concentrated in an “arc of deforestation” in the northwest Colombian Amazon.

Tinigua National Park is the most impacted protected area with the deforestation of 5,100 hectares (12,600 acres). Note the rare occurrence of a major deforestation hotspot in the middle of a national park.

*To see detailed map of the 2019-20 primary forest deforestation in the Colombian Amazon, click here.

Below, we show 2020 examples within the arc of deforestation in the northwest Colombian Amazon.

Image 1 illustrates the extensive deforestation within Tinigua National Park over the last five years continuing in 2020.

Image 3 shows an example of deforestation within the Llanos del Yari-Yaguara II Indigenous Reserve between January (left panel) and April (right panel) of 2020. 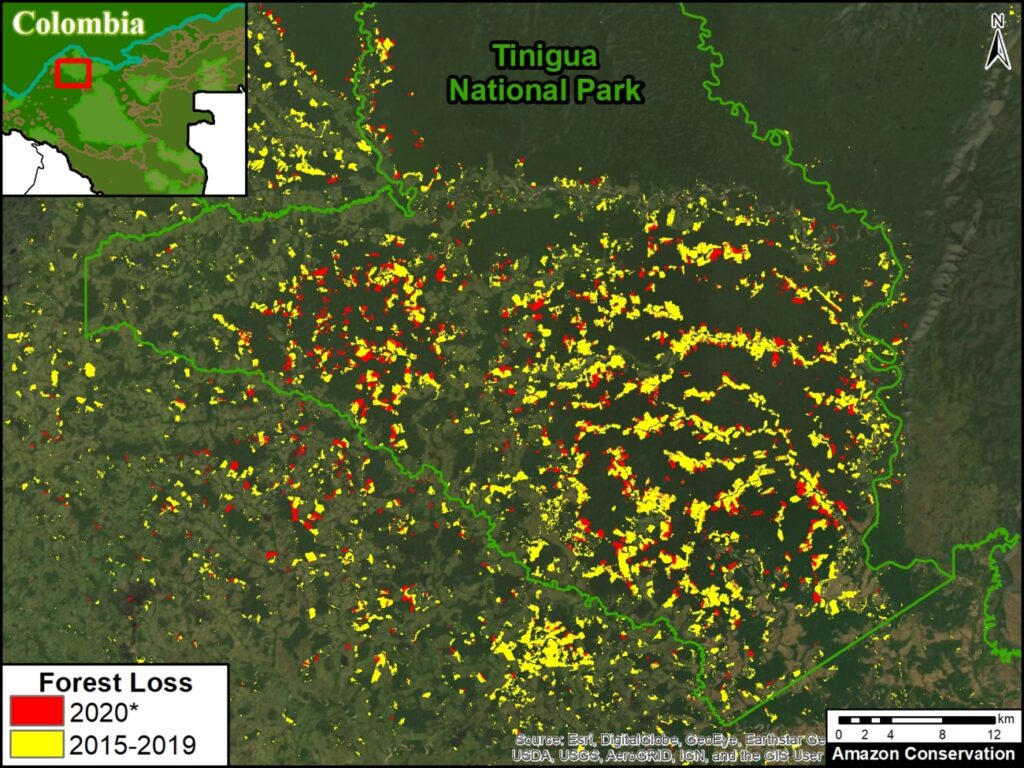 Table 2 shows the loss of primary forest in four protected areas located in the arc of deforestation arc in the northwestern Colombian Amazon, between 2015 and 2020. 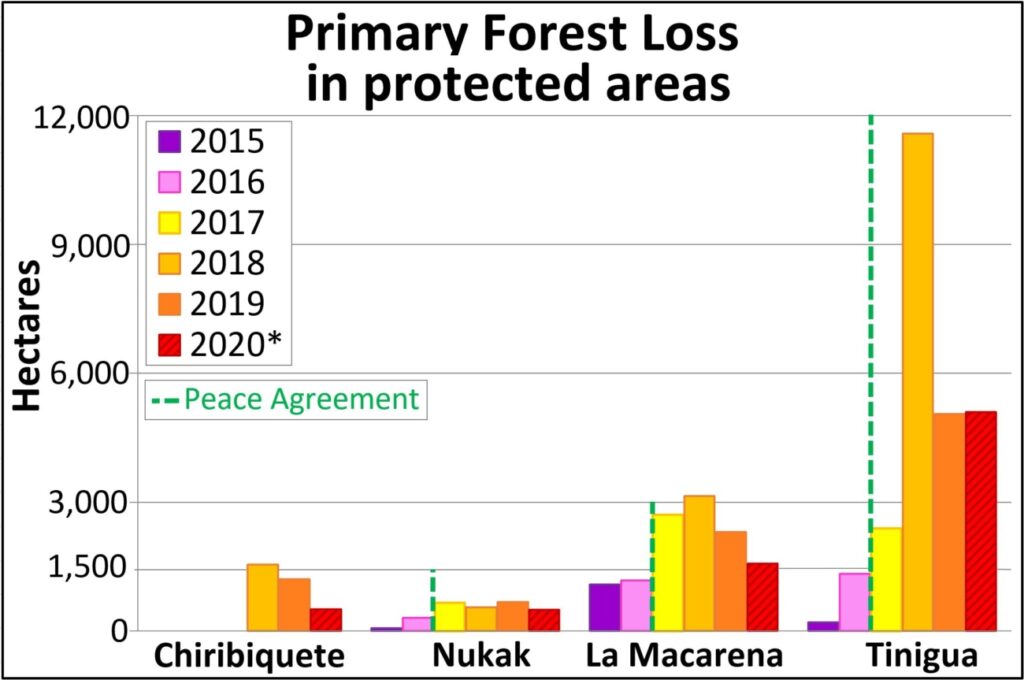 The data presented in this report were generated by the Global Land Analysis and Discovery (GLAD) laboratory at the University of Maryland (Hansen et al 2013) and presented by Global Forest Watch. For the years 2015-18, we used annual forest loss data. For the years 2019-20, we used early warning alerts (GLAD alerts), and thus represent an estimate. Note that some forest loss detected early in the year may include events from late the preceding year.

Our study area is the Amazon biogeographical limit (not strict Amazon watershed) as highlighted in the Base Map.

Specifically, for our estimate of forest cover loss, we multiplied the annual “forest cover loss” data by the density percentage of the “tree cover” from the year 2001 (values >30%).

For our estimate of primary forest loss, we intersected the forest cover loss data with the additional dataset “primary humid tropical forests” as of 2001 (Turubanova et al 2018). For more details on this part of the methodology, see the Technical Blog from Global Forest Watch (Goldman and Weisse 2019).

All data were processed under the geographical coordinate system WGS 1984. To calculate the areas in metric units the UTM (Universal Transversal Mercator) projection was used: Colombia 18 North.

Lastly, to identify the deforestation hotspots, we conducted a kernel density estimate. This type of analysis calculates the magnitude per unit area of a particular phenomenon, in this case forest cover loss. We conducted this analysis using the Kernel Density tool from Spatial Analyst Tool Box of ArcGIS. We used the following parameters:

We thank R. Botero (FCDS), E. Ortiz (AAF), and G. Palacios for helpful comments to earlier versions of this report.