Nine new beetle species and two new genera were recently discovered at our biological stations in the Peruvian Amazon by British researcher Dr. Michael Darby, noted in his recent publication “New genera and species of Ptiliini (Coleoptera: Ptiliidae) with a tribal revision and key to genera.”

Greensladella cicra sp.n measures 0.68 mm, with a reddish brown body with dusky yellow legs and antennae. Its head is covered with large circular shallow setal depressions, and the row behind the eyes is slightly elongated. Numa carmen sp.n measures 0.61 mm and the color is dark, almost black, with pale yellow antennae and a strongly sculpted head and body 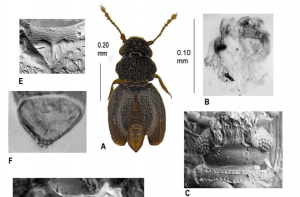 They are part of the Ptiliidae family of beetles, which includes some of the smallest beetles in the world. These are also sometimes called featherwing beetles, because the hindwings are narrow and feathery.

In total, Dr. Michael Darby’s publication added three new genera (two from Peru at our stations) to the beetle tribe Ptiliini and 29 new species (nine discovered at our stations). His research helps better categorize this tribe of beetles, as he also created a key to help determine specimens.

Our stations have hosted over 200 research projects and produced over 200 publications, including biological inventories of more than 30 types of organisms. Due to the range of elevational gradients, they host an incredible array of species found in a variety of habitats, ranging from cloud forest to montane and lowland Amazonian forests.