Radar Monitoring, the Newest Ally in the Fight Against Illegal Gold Mining 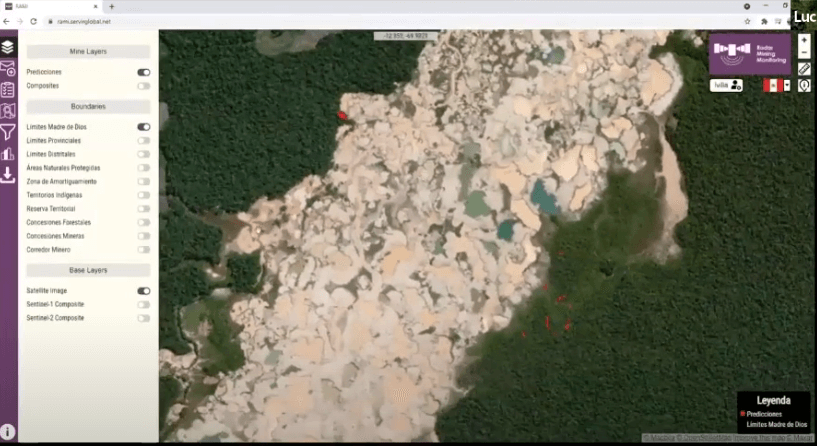 With the ability to see through the dense layers of clouds that are a hallmark of the rainforest, track illegal gold mining, and send deforestation alerts throughout the year, RAMI is the most recent ally in the fight against illegal gold mining in the Peruvian Amazon. A newly developed geospatial technology tool, RAMI (Radar Mining Monitoring Tool) monitors the advance of gold mining via satellite and radar in the Amazonian region of Madre de Dios in Peru, a country where the “gold rush” has devastated more than 237,000 acres (96,000 hectares) of primary forest over the past 30 years.

In addition to generating early deforestation alerts and providing real-time information regarding changes in forest cover, the key advantage of this radar mining monitoring tool is its ability to overcome the limitation that satellites encounter when trying to capture photos of the forest on a cloudy day. RAMI’s radar monitoring can “see” through clouds and thus provide information about the forest without weather patterns getting in the way.

“Before using this new platform, we only worked at the level of optical images but the satellites only captured images every six months, with no information during rainy season. With RAMI, monitoring is constant, be it day, night, raining or cloudy,” noted a specialist at the Satellite Monitoring Unit at the Office of the Special Prosecutor for Environmental Matters (FEMA) to Spanish news agency Agencia Efe.

The implementation of RAMI since last June looks to strengthen the Peruvian government’s aim to combat the loss of forest cover as a result of illegal gold mining in Madre de Dios. This destructive activity not only causes deforestation, the loss of ecosystems but also the pollution of local water sources by toxic runoff from the mercury used to separate out the gold.

Juan Loja, from Conservación Amazónica – ACCA, explained that the monthly alerts generated by RAMI are not only helpful for those who manage protected areas and governmental decision-making, but also for the indigenous communities of the region. Julio Cusurichi, the president of the Native Federation of the Madre de Dios River and Tributaries (FENAMAD), elaborates upon this, saying that, “the information is very important because in one way or another it supports what one can make known. For example, if there is an invasion in a community’s territory, it can be relayed by phone, but it is much better when there is photographic or video evidence.”

In fact, since the Peruvian government launched Operation Mercury in February 2019, an unprecedented measure to combat illegal gold mining in La Pampa region of Madre de Dios, prosecutors and police have gone out to the field every day with the intention of eradicating new illegal gold mining camps and seizing or destroying associated machinery. Without the reliable and real-time satellite data and imagery, however, this process is slow and time-consuming. RAMI is expected to strengthen these initiatives and other efforts that until now have been unable to reverse the environmental disasters caused by the illegal exploitation of one of the many treasures of the Peruvian jungle. 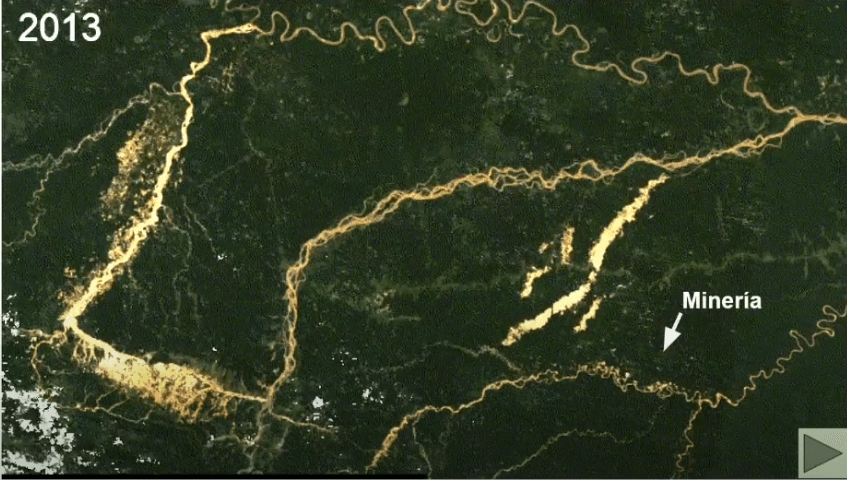 This article was translated and summarized for our audience; click here to read the original article and interviews by Agencia EFE. Read more about the launch of RAMI here. Watch the launch webinar for the RAMI Satellite Monitoring tool (in Spanish). RAMI was developed by Conservación Amazónica – ACCA through the SERVIR-Amazonia program, led by the Bioversity International Alliance and the International Center for Tropical Agriculture (CIAT). Co-developers include Alliance of Bioversity – CIAT/SERVIR-Amazonia, Ministerio del Medio Ambiente del Perú (MINAM), Programa Nacional de Conservación del Bosques y Cambio Climático (PNCBMCC), and the Spatial Informatics Group (SIG).