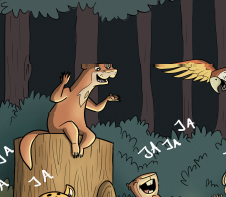 This past World Wildlife Day, our sister organization Conservación Amazónica – ACEAA in Bolivia uniquely told the stories of Amazonian animals through their original comics series “Once Upon a Time in the Forest”.

The story stars a giant otter, an endangered species in the Amazon, who meets with forest friends around a campfire to tell a ‘scary story’ about an encounter with humans in the river. The series seeks to raise awareness, familiarize children living in Amazonian communities with their natural environment, and change the perception of wildlife by promoting the coexistence of humans and nature. This unique approach was met with a wave of positive feedback, from being featured in the prominent national Bolivian newspaper, Página Siete, to being invited to the a major news radio station Radio Expresión 106.6 FM, La Radio de los Periodistas.

Marcos Terán Valenzuela, Executive Director of Conservación Amazónica – ACEAA tells Página Siete how, when children living in communities in the Amazon were asked to draw their favorite animal, “they drew elephants, giraffes, lions … and not closer species such as jaguars or giant otters.” The objective of these short stories then became to inspire positive relationships and respect in children for animals living right in their local forest environment.

“It is important to encourage childrens’ relationships with nature,” Marcos explains. “The educational curriculum should promote this with the support of the teachers, with the aim that future generations respect their environment by making conscious use of natural resources.” This is the second issue in the Once Upon a Time in the Forest series. The first issue, starring a jaguar, another endangered species, was published last year and distributed to students in Amazonian communities of Pando and the north of La Paz.

“The characters are animals from the Amazon that tell stories about their problems with humans,” Marcos elaborates. “They report encounters with humans where they get hurt or food is taken from them, so we want people to understand that humans are a threat to animals if their natural habitats aren’t respected. We also include the perspective of people who complain, for example, that giant otters eat their fish, when fish can be food for both humans and giant otters. The goal is to learn to coexist.”

Though these comics address serious topics, the short stories in Once Upon a Time in the Forest are characterized by silly, charismatic characters that young readers adore. Upcoming issues will feature other endangered or threatened species such as the giant anteater, tapir, agouti, and scarlet macaw.

Click here to read the comic in Spanish. English translation to come.