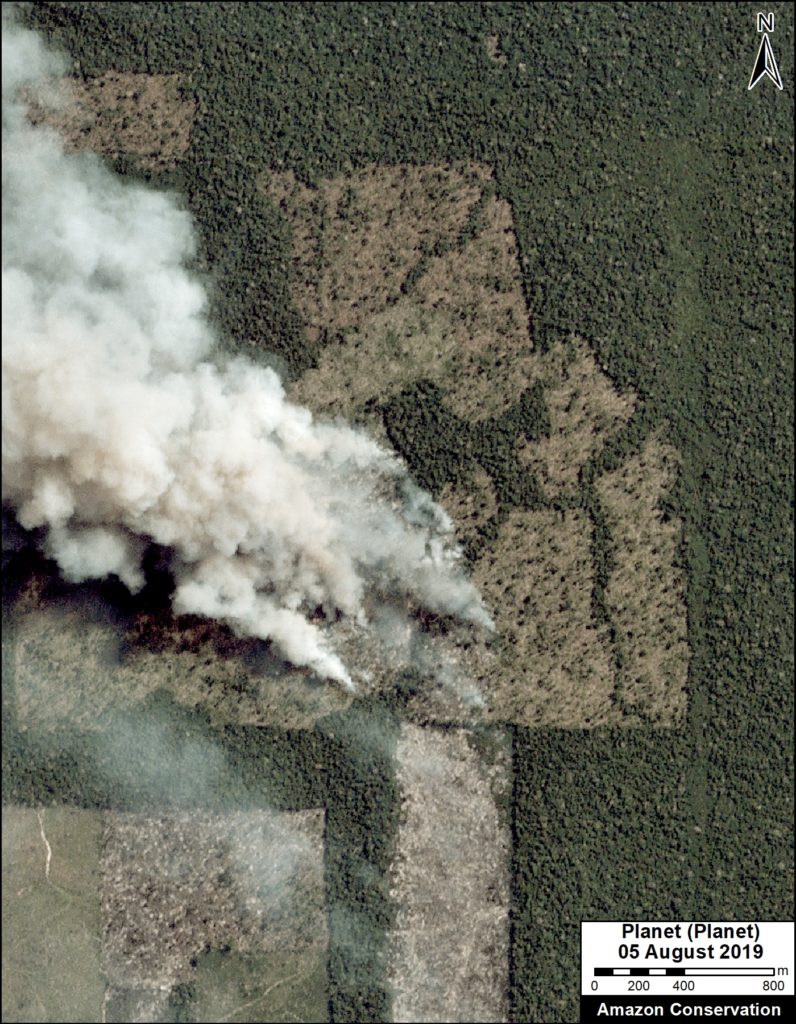 In MAAP #109 we reported a major finding critical to understanding this year’s fires in the Brazilian Amazon: many of the 2019 fires followed 2019 deforestation events.

Thus, the issue is both deforestation AND fire; the fires are often a lagging indicator of recent agricultural deforestation.

This key finding flips the widely reported assumption that the fires are burning intact rainforests for crops and cattle.

Instead, we find it’s the other way around, the forests were cut and then burned, presumably to enrich the soils. It is “slash and burn” agriculture, not “burn and slash.”

The policy implications are important: national and international focus needs to be on minimizing new deforestation, in addition to fire prevention and management.

This breakthrough data is based on our analysis of an extensive satellite imagery archive, allowing us to visually confirm areas that were deforested in 2019 and later burned in 2019 (see Methodology).

Below we present a new series of 7 striking timelapse videos that vividly show examples of 2019 deforestation followed by fires (See Base Map below for exact zoom locations).

Video 2 shows the deforestation of 910 hectares (2,250 acres) in Amazonas state in early 2019, followed by fires in August. Planet link.

Video 3 shows the deforestation of 650 hectares (1,600 acres) in Rondônia state in early 2019, followed by fire starting in X. Planet link.

Video 5 shows the deforestation of 350 hectares (865 acres) in Amazonas state in early 2019, followed by fires in August. Planet link.

Video 7 shows the large-scale deforestation of 1,450 hectares (3,600 acres) in Amazonas state between April and August, followed by fire in September. Note this is the same area shown as Zoom A in MAAP #109 for the scenario (Deforestation-No Fire) but it just now was burned. Planet link.

In MAAP #109 we reported that another concerning source of many fires is the burning of savannah areas around the rainforest, for example in Mato Grosso.

We continue to monitor for the emergence of uncontained forest fires as the dry season continues.

We prioritized areas highlighted in orange in the Base Map presented in MAAP #109. These orange areas indicate the overlap of 2019 forest loss alerts (GLAD alerts from the University of Maryland) and 2019 fire alerts (from NASA’s MODIS satellite sensor).

For the major orange areas in Rondônia, Amazonas, Mato Grosso, Acre, and Pará, we conducted a visual analysis using the satellite company Planet’s online portal, which includes an extensive archive of Planet, RapidEye, Sentinel-2, and Landsat data. Using the archive, we identified areas that we visually confirmed a) were deforested in 2019 and b) were later burned in 2019 between July and September. We then used the area measure tool to estimate the size of these areas, which ranged from large plantations ( ~1,000 hectares) to many smaller areas scattered across the focal landscape.

The data is updated through mid-September 2019.

The Base Map in the Annex indicates the location of the areas featured in the timelapse zooms.

The numbers (1-7) correspond to the location of the areas in the videos above. 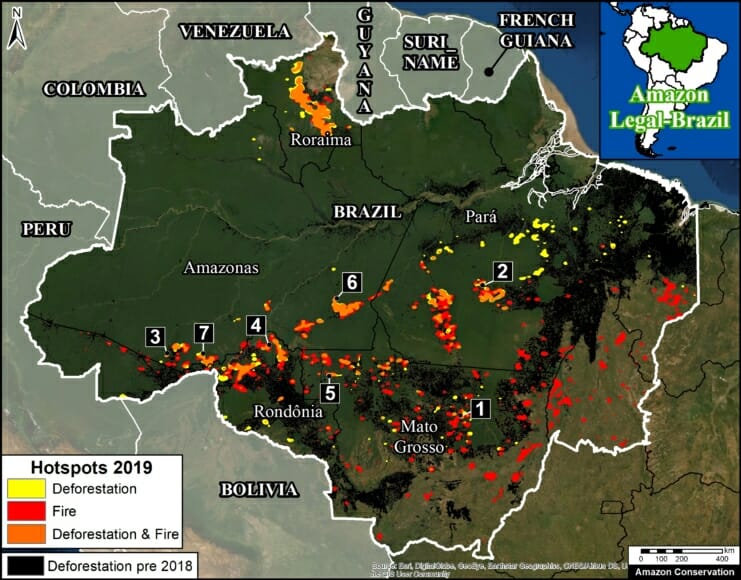 We thank T. Souto (ACA) and A. Folhadella (ACA) for helpful comments to earlier versions of this report.