In a new series, we highlight the main illegal gold mining frontiers in the Amazon.

Here, in part 1, we focus on Peru. In the upcoming part 2, we will look at Brazil.

The Base Map indicates our focus areas in Peru*:

Illegal gold mining continues, however, in three other major areas of the southern Peruvian Amazon (Alto Malinowski, Camanti, and Pariamanu), where we estimate the mining deforestation of 5,300 acres (2,150 hectares) since 2017.

Of that total, 22% (1,162 acres) occurred in 2019, indicating that displaced miners from Operation Mercury have NOT caused a surge in these three areas.

Below, we show a series of satellite videos of the recent gold mining deforestation (2017-19) in each area.

*Recent press reports indicate the increase in illegal gold mining activity in northern Peru (Loreto region), along the Nanay and Napo Rivers, but we have not yet detected associated deforestation.

In MAAP #104, we reported a major reduction (92%) of gold mining deforestation in La Pampa during the first four months of Operation Mercury, a governmental mega-operation to confront the illegal mining crisis in this area.

The following video shows how gold mining deforestation has declined considerably since February 2019, the beginning of the operation. Note the rapid deforestation during the years 2016-18, followed by a sudden stop in 2019.

Of that total, 20% (865 acres) occurred in 2019, indicating that displaced miners from Operation Mercury have not caused a surge in this area adjacent to La Pampa.

Note that the mining deforestation is within the Kotsimba Indigenous Community territory. However, it has not penetrated Bahuaja Sonene National Park, in part due to the actions of the Peruvian Protected Areas Service (SERNANP).

The following video shows the gold mining deforestation of 944 acres (382 hectares) in the Camanti district (Cusco region), during the 2017 – 2019 period.

Of that total, 21% (198 acres) occurred in 2019, indicating that there has been no increase in mining activity in this area since the beginning of Operation Mercury in February (in contrast to press reports that have suggested that many displaced miners have moved to this area).

SERNANP (Peruvian Protected Areas Service) informed us that in December 2019, as part of Operation Mercury, the Public Ministry (Ministerio Público) led an interdiction with the support of law enforcement. Machinery, mining camps, and mercury were destroyed or removed during the raid. In 2020, as part of an extension of Operation Mercury, the Environmental Prosecutor’s Office (FEMA) of the Public Ministry announced that the buffer zone of the Amarakaeri Communal Reserve will be constantly monitored.

The following video shows gold mining activity along a section of the Pariamanu River (Madre de Dios region). We estimate the gold mining deforestation of 245 acres (99 hectares) in the Pariamanu area, during the 2017 – 2019 period.

Of that total, 40% (99 acres) occurred in 2019, indicating that there has been a slight increase in mining activity since the beginning of Operation Mercury in February. This finding suggests that displaced miners may be moving to this area.

According to governmental information (see Annex 2), this mining activity is likely illegal because it is not within active mining concessions and outside the mining corridor. Moreover,  the mining deforestation is within Brazil nut forestry concessions.

The following video shows the gold mining deforestation of 52 acres (21 hectares) in the buffer zone of El Sira Communal Reserve (Huánuco region), during the 2017 – 2019 period.

Although the mining activity occurs in an active mining concession, a recent report indicates that it is illegal because it does not have the deforestation authorization.

The mining corridor is the area that the Peruvian Government has defined as potentially legal for mining activity in the Madre de Dios region via a formalization process. As of 2019, over 100 miners have been formalized in Madre de Dios.

The following two videos show examples of gold mining deforestation in the mining corridor during 2019. 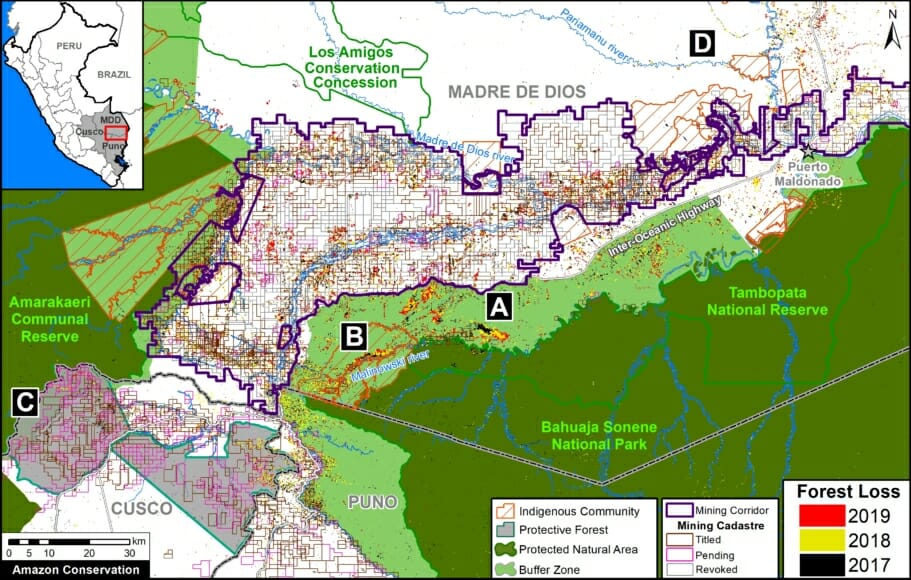 We thank E. Ortiz (AAF), A. Flórez (SERNANP), P. Rengifo (ACCA), A. Condor (ACCA), A. Folhadella (Amazon Conservation), and G. Palacios for helpful comments to earlier versions of this report.