20 for 20: Deforestation Decreases 92% After Years of Work Leads to Operation Mercury 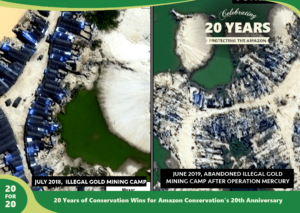 For decades, the southern region of Madre de Dios had been plagued by unmanaged and illegal gold mining that converted once thriving habitats into wastelands, and contaminated lands and rivers with mercury. This became so severe that the Peruvian government declared a state of emergency, and subsequently launched Operation Mercury, a series of highly-coordinated military interventions that apprehended illegal gold miners and destroyed the mining camps that not only destroy thousands of acres of forests, but were the breeding ground for human trafficking, child labor, sex slavery, and hired hit men.

The result was immediate: a 92% decrease in deforestation caused by illegal gold mining in the region. This intervention was a culmination of years of work.

For the past five years, our deforestation satellite monitoring program has given the Peruvian government real-time reports on illegal deforestation. We applied our satellite monitoring expertise to build the government’s capacity in understanding and using this high-tech information within the judicial system, by training judges, prosecutors, and government officials, as well as creating specialized offices to conduct their own satellite monitoring. Since often the complexity and bureaucracy inherent in governments makes it difficult for agencies to step out of their own silos to effectively work together on fighting complex environmental crimes, we also worked to establish the formal intra-governmental relationships necessary for action to take place. Now the government has a working system – called the National System for Control and Monitoring – that uses high-tech information and is able to coordinate large-scale interventions like Operation Mercury.

This is part of a series commemorating our 20th anniversary protecting the Amazon. We’re celebrating this milestone with a look back at our 20 biggest conservation wins over the past 20 years. Click here to support more capacity-building conservation programs in the Amazon.