20 for 20: Species Discoveries at our Research Stations 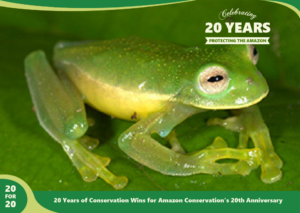 Thanks to the incredible biodiversity in the Andean Amazon, scientists conducting research at our biological stations have discovered multiple new species. In this 20 for 20 story, we’re highlighting some of our favorite frog discoveries over the years.

An Amazon Conservation-funded research team discovered the 7,000th amphibian species in the world at our Wayqecha Cloud Forest Research Station . The new glass frog, described as Centrolene sabini, was particularly intriguing for researchers due to its high sensitivity to the chytrid fungus. The team was led by Wayqecha’s then-research coordinator Alessandro Catenazzi, who has extensive background studying frog populations around the area, documenting the decline in frog diversity and populations. 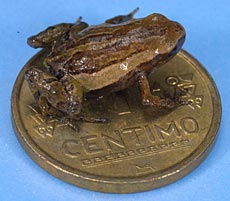 Additionally, the Andean region’s smallest known frog was discovered at our Wayqecha Cloud Forest Research Station. Smaller than a dime, the Noble’s pygmy frog (Noblella pygmae) surprised herpetologists studying at Wayqecha because it contradicts the informal rule that high altitude vertebrates tend to be larger than low altitude vertebrates.  Noble’s pygmy frog is among the smallest vertebrates ever found at this altitude, and one of the smallest amphibian species in the world. 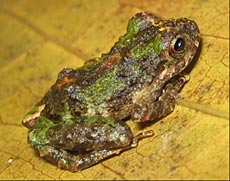 The last highlight of today includes a new frog discovered at Los Amigos Biological Station. This species, Pristimantis divnae, belongs to the family Strabomantidae and lives in the leaf-litter and understory in terra firme forest at the base of Peru’s southern Andes. The species is characterized by a contrasting pattern of yellow and black with brown patches.

This story is part of a series commemorating our 20th anniversary protecting the Amazon. We’re celebrating this milestone with a look back at our 20 biggest conservation wins over the past 20 years. Click here to fund important research at our biological stations in and around the Amazon.