MAAP tracks the most urgent deforestation cases in the Andean Amazon, thus it can be a bit depressing. However, it is important to remember why we do it: the Amazon is spectacular. 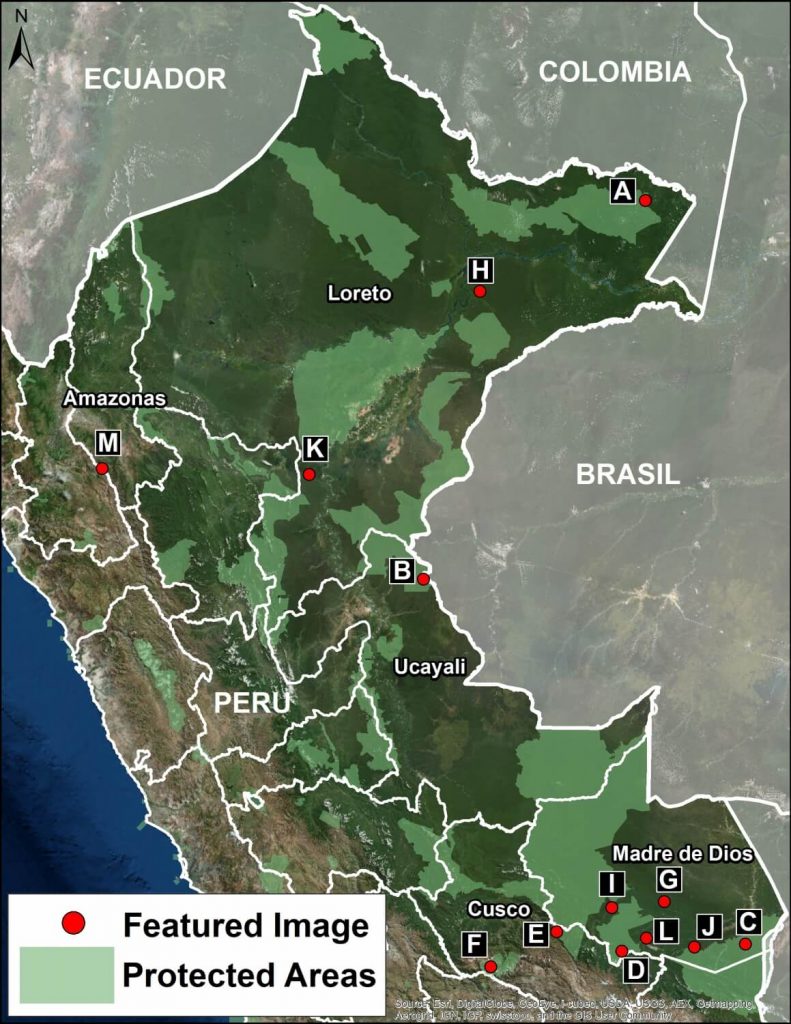 Here, we present a series of high-resolution satellite images to show the incredible beauty of the Peruvian Amazon, and help remind us all why it is so important to protect.

All the images, obtained from DigitalGlobe, are both recent and very high resolution (less than 0.5 meters). Together, they form an art exhibition, starring the forests, rivers, and mountains of the Peruvian Amazon.

The categories of the images are: “Protected Areas” and “Threatened Areas.”

The Threatened Areas include areas at risk due to gold mining, road construction, hydroelectric dams, and new oil palm and cacao plantations.

Click on each image to enlarge. See the base map for the location of each image (A-M).

As Peru’s newest national park, created in January 2018, Yaguas National Park now protects a large (2,147,345 acres) and nearly intact stretch of the northern Peruvian Amazon. In featured Image A, we show the Yaguas River meandering through the primary forest of the eastern section of the new park. 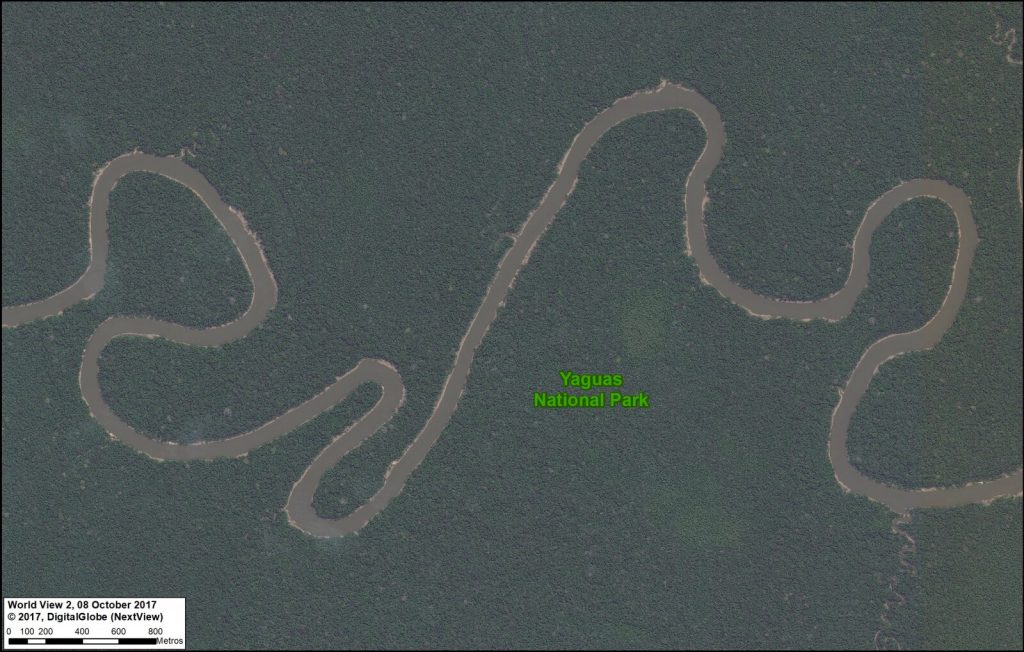 The second newest national park in Peru is Sierra del Divisor, created in 2015. Sierra del Divisor National Park protects more than three million acres in the remote central Peruvian Amazon, along the border with Brazil. Featured Image B shows an aerial view of the famous cone mountain in the southern part of the park. 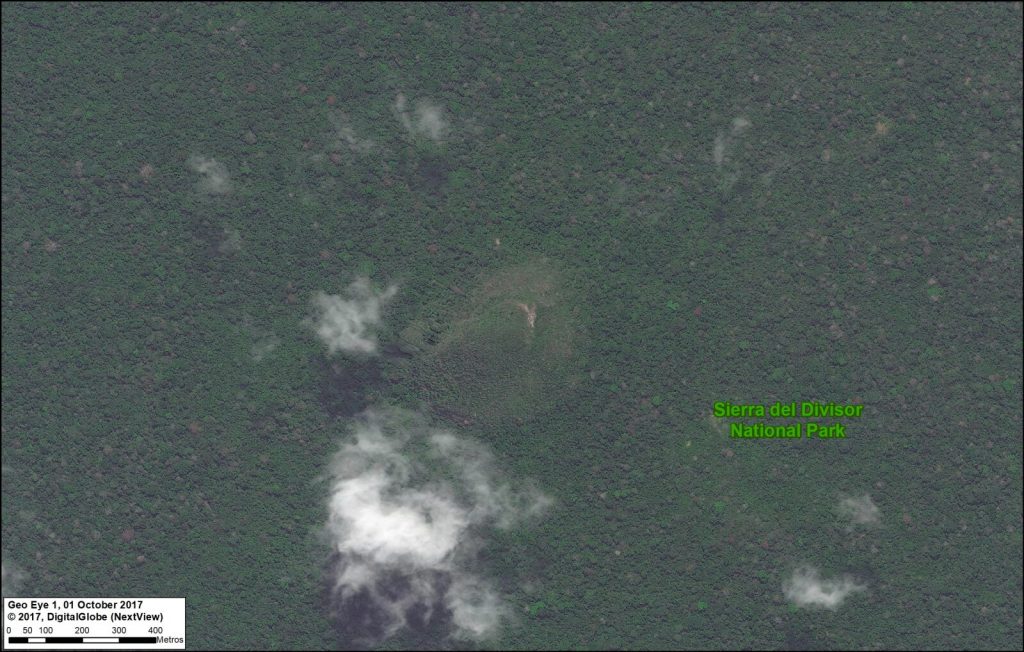 Tambopata National Reserve made headlines in 2015 due to an illegal gold mining invasion that has since been contained (MAAP #61). Fortunately, Tambopata, located in the southern Peruvian Amazon, is best known for its world-renowned biodiversity. Featured Image C shows a meandering tributary of the Tambopata River and the subsequent formation of oxbow lakes. 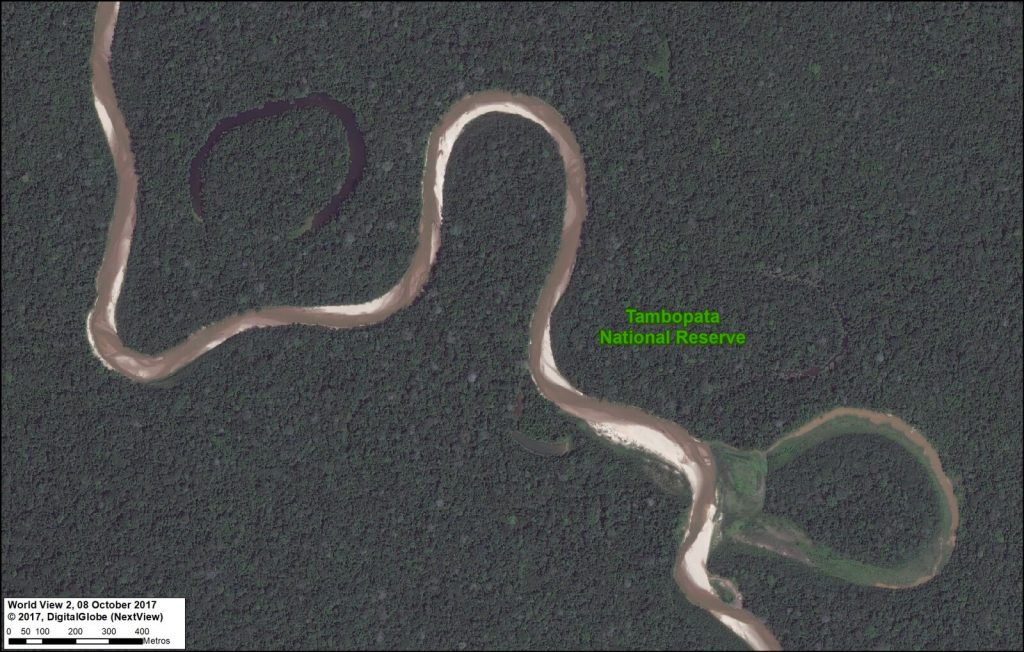 Amarakaeri Communal Reserve is an important protected area in the southern Peruvian Amazon that is jointly managed by indigenous communities (ECA Amarakaeri) and the national protected areas agency (SERNANP). Featured Image D shows a wild river winding through the rugged foothills of the southern portion of the reserve. 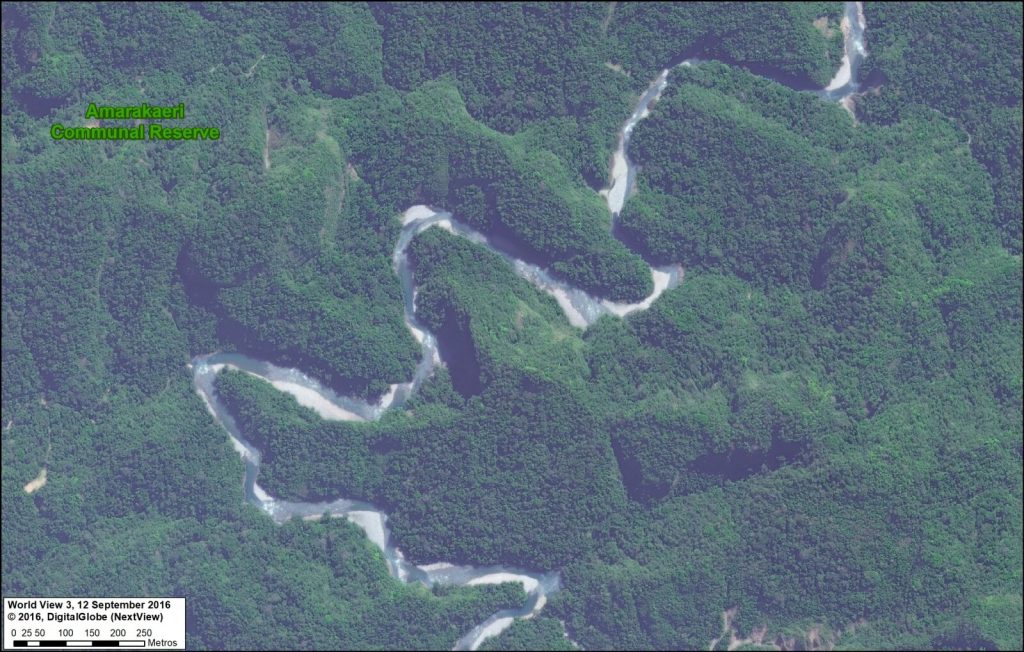 Manu is one of the most famous national parks in the world, known for its diversity of habitats in the southern Peruvian Amazon, including lowland rainforest. Featured Image E shows the other extreme, the highlands and the transition beyond the tree-line to an ecosystem known as puna. Interestingly, this image shown an example of the upper-most headwaters where Amazonian rivers are born. 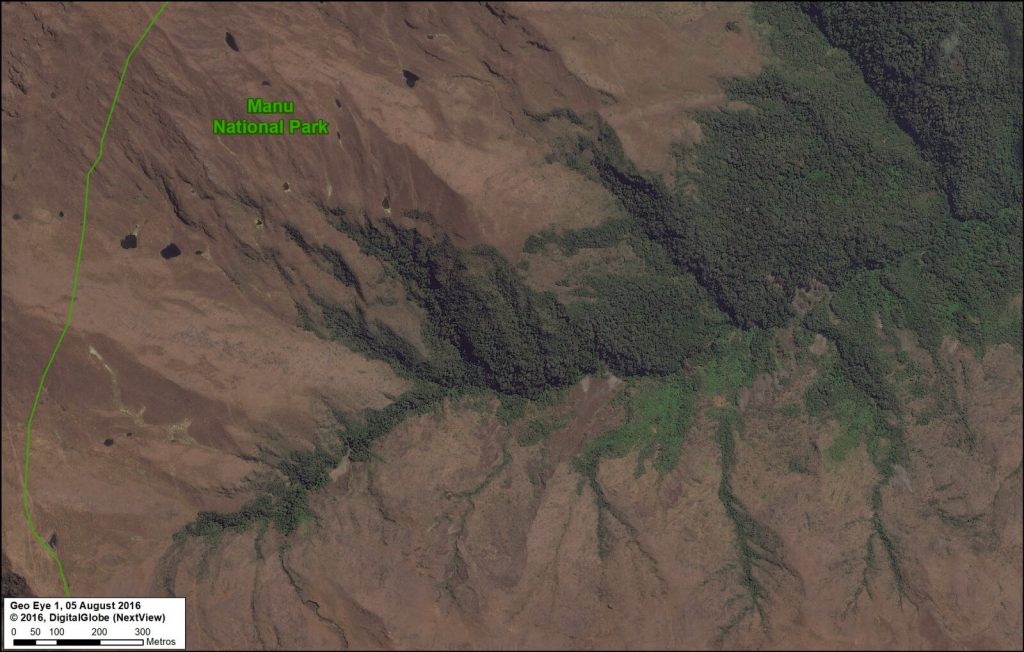 Choquequirao, one of the first examples of a regional conservation area in southern Peru, is located next to Machu Picchu. Featured Image F shows a high-elevation scene in the heart of the reserve, near the mountain peak known as Nevado Sacsarayoc. 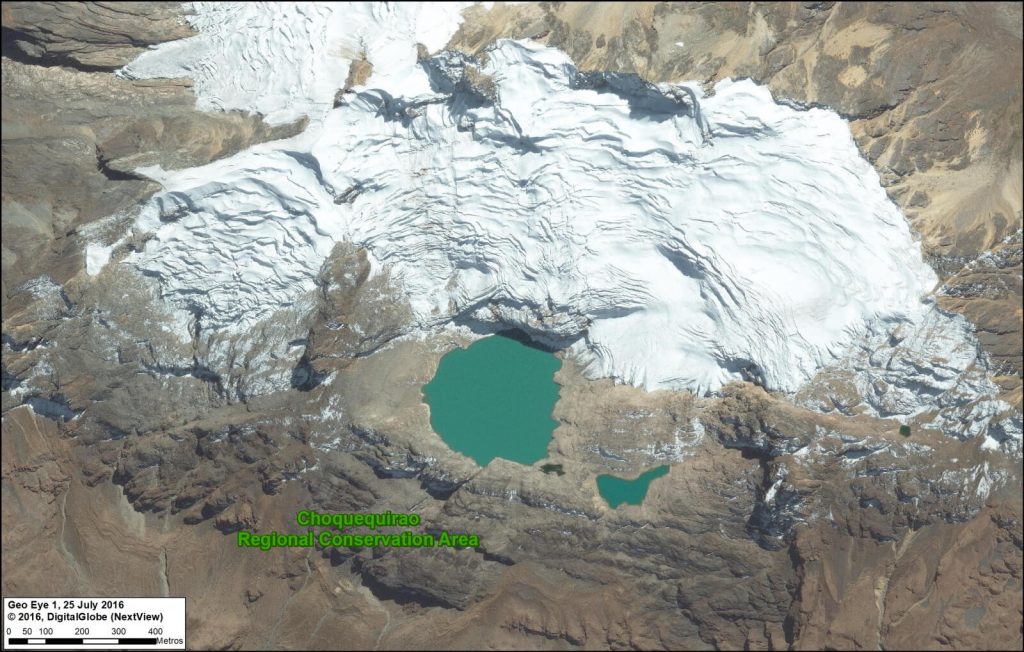 It’s not technically a protected area, but a forestry concession in the southern Peruvian Amazon. In fact, Los Amigos is the first private conservation concession in the world. Featured Image G shows the meandering course of a tributary of the Los Amigos river, and the surrounding primary forest, deep in the concession. 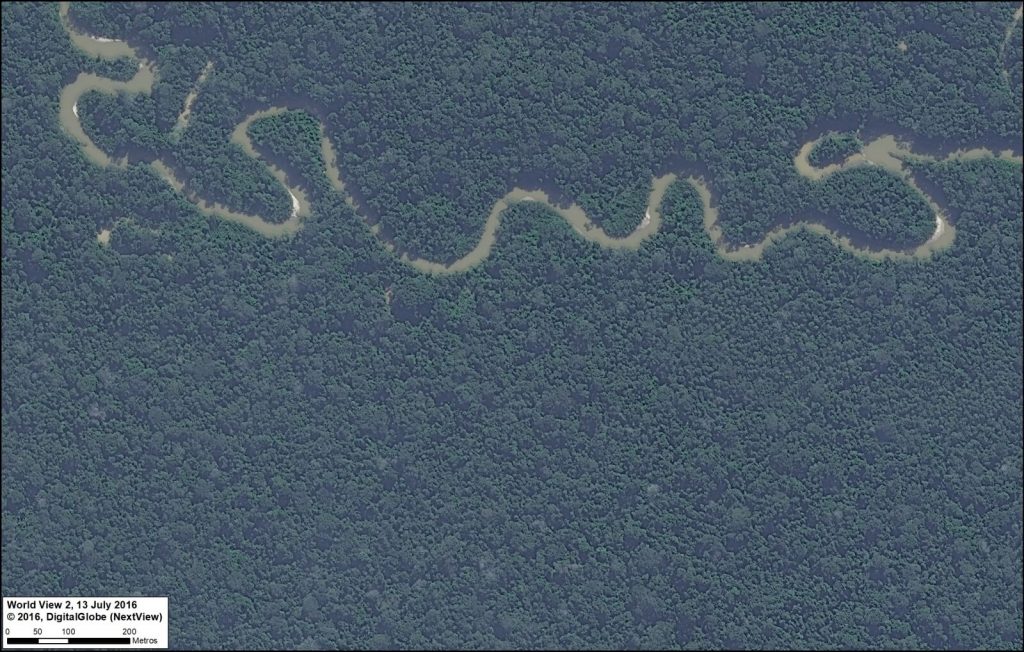 The company United Cacao clear-cut 5,880 acres of primary forest near the town of Tamshiycacu in the northern Peruvian Amazon between 2013 and 2015 (MAAP #35). Featured Image H shows the abrupt transition between plantation and primary forest at the eastern end of the project area, where plans exist to expand for more large-scale cacao operations. 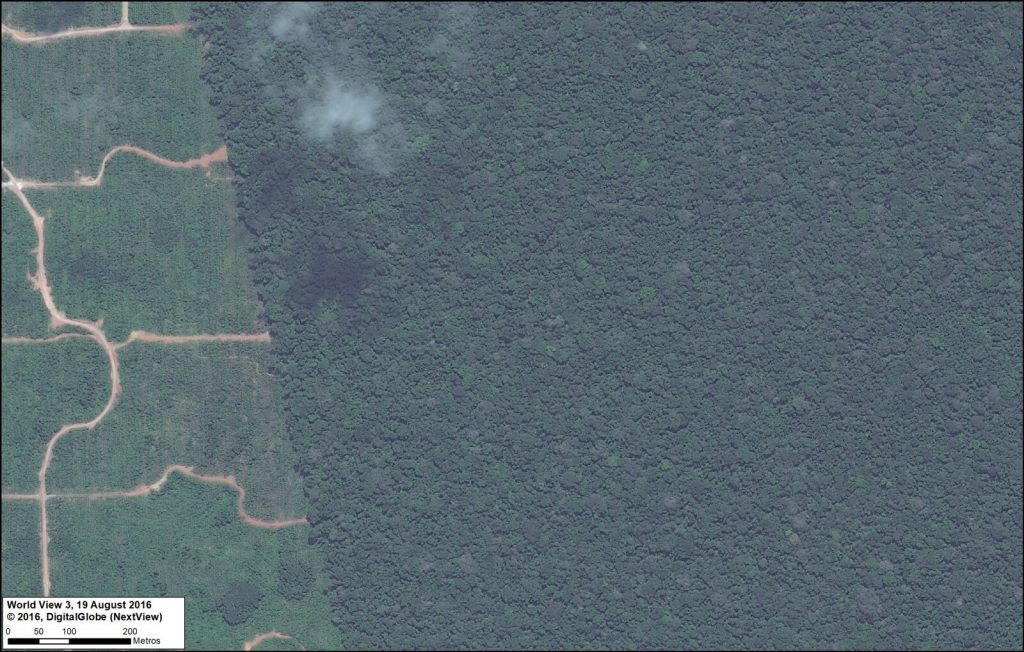 A controversial road construction project would cross the buffer zones of two important protected areas in the southern Peruvian Amazon, Amarakaeri Communal Reserve and Manu National Park. Initial construction began in 2015 before being halted by the courts, but the project continues to be a long-term threat to the area. Featured Image I shows the leading edge of the road construction, surrounded by primary forest. 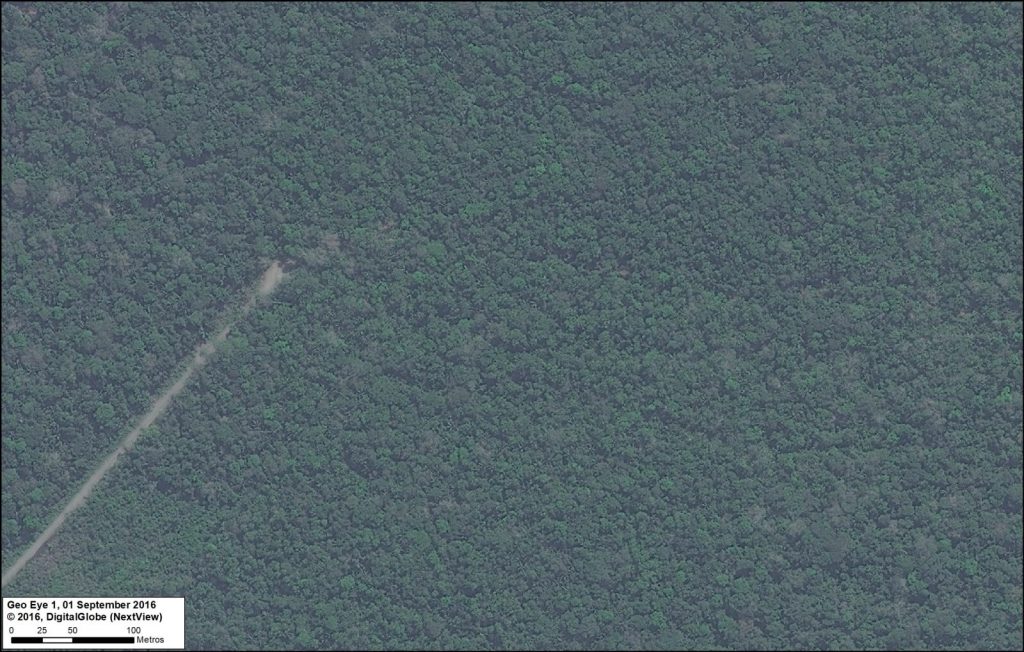 MAAP has documented the rapid expansion of gold mining deforestation in an area known as La Pampa, in the southern Peruvian Amazon (MAAP #75). Alarmingly, over 11,250 acres has been cleared since 2013. Featured Image J shows the most active mining deforestation front penetrating the primary forests to the east. Note the temporary and mobile mining camp city that has been formed near the leading edge of mining deforestation. 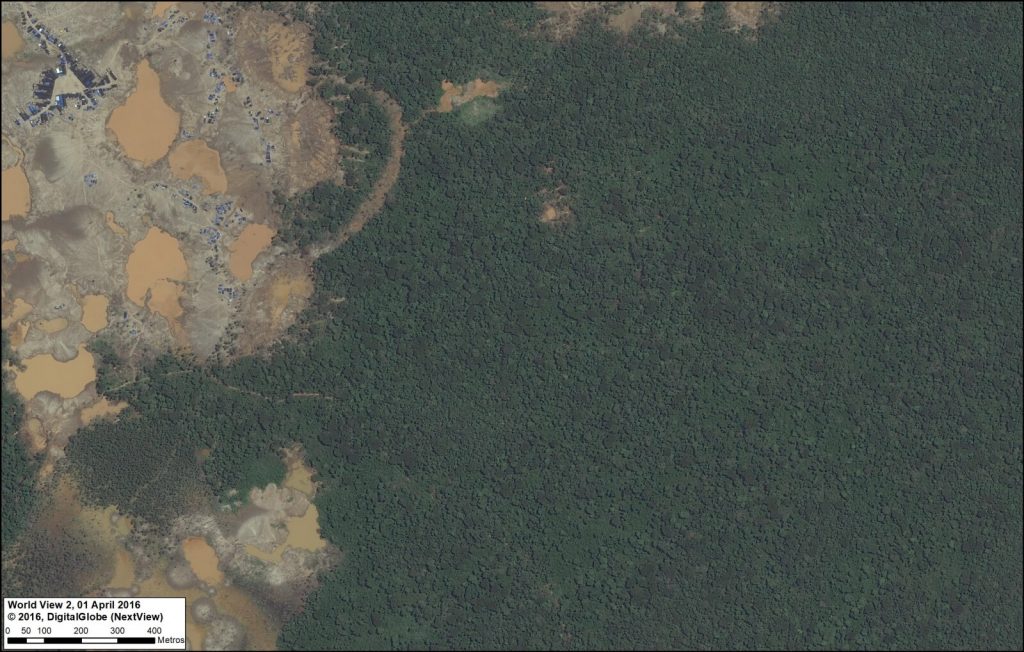 The Peruvian company Grupo Romero had plans to clear-cut thousands of hectares of primary forest for four large-scale oil palm plantations. There are reports that the company has abandoned the projects, in part due to pressure from civil society. Featured Image K shows the spared primary forest in one of the proposed plantations, Tierra Blanca. Note the recent construction (2014) of a logging road that still endangers the area. 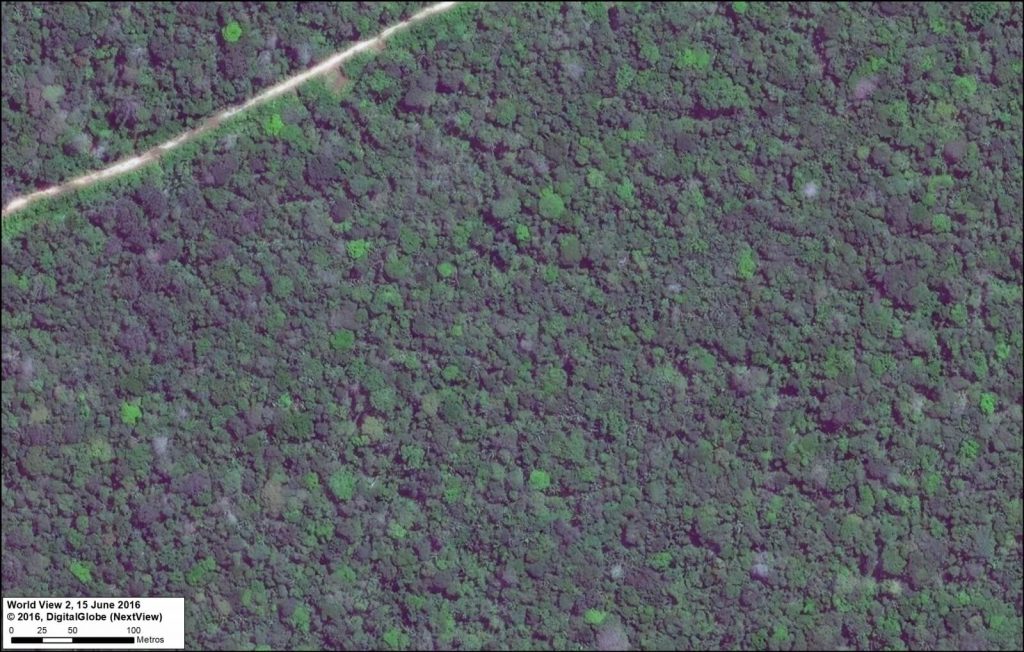 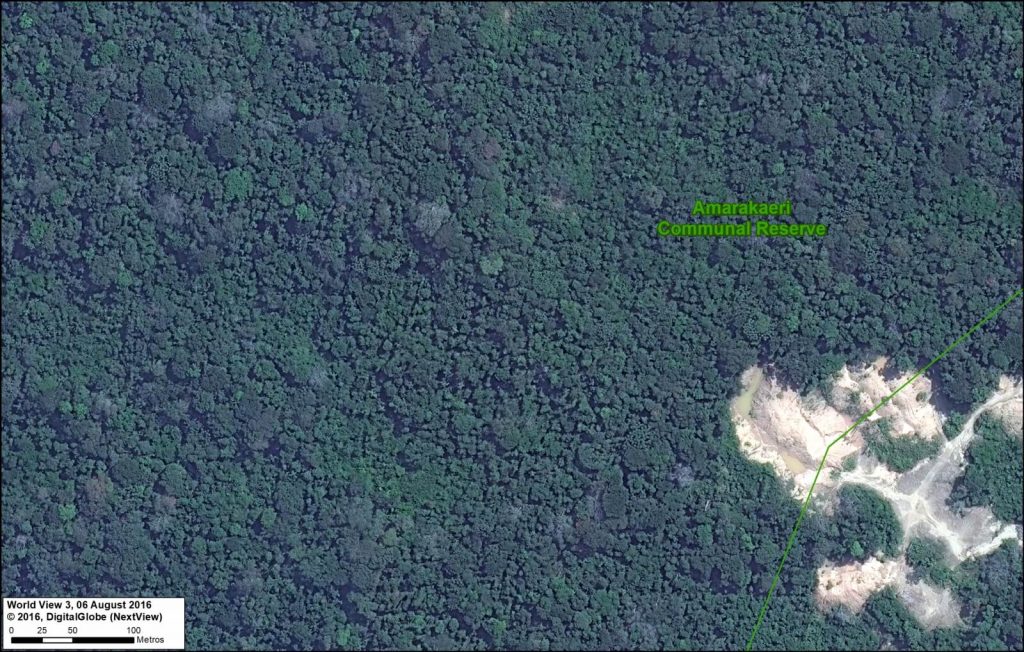 Featured Image M shows the exact location of a proposed hydroelectric dam, Chadín 2. It is one of the most advanced of the controversial 20 proposed dams along the Marañón River in the western Peruvian Amazon. It would be a large dam with the capacity to produce 600 MW of energy, and will create a flooding reservoir of over 8,000 acres. The project’s environmental impact study was approved in 2014, but construction has not yet started. 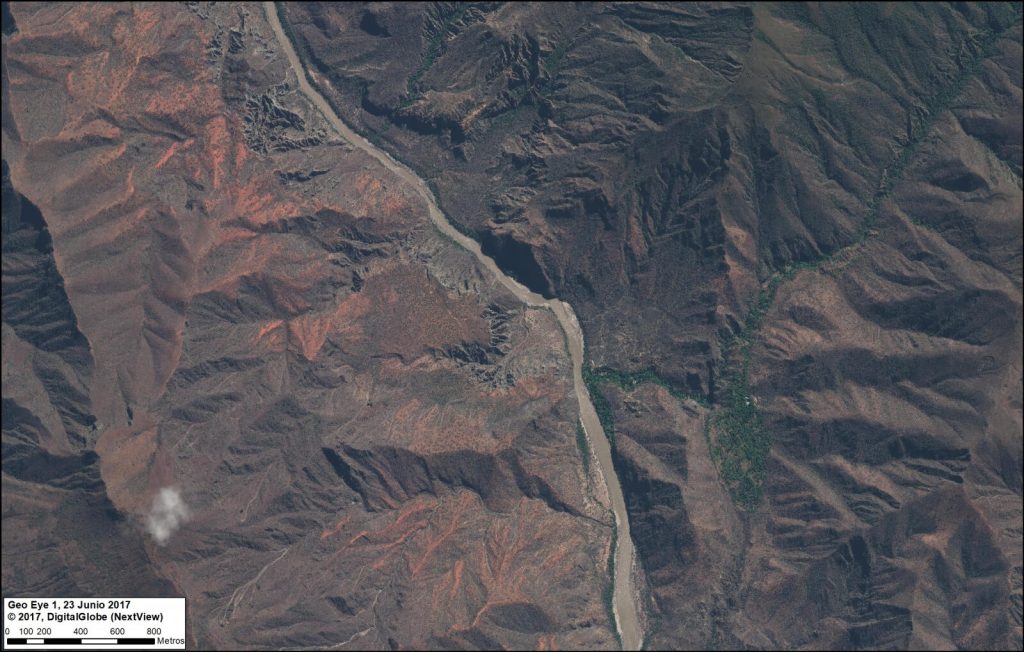