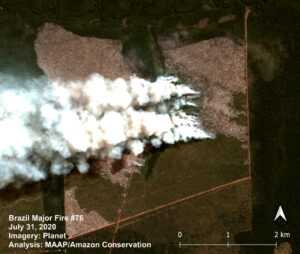 Our innovative new app for Real-time Amazon Fire Monitoring has detected over 200 major fires in 2020.

The app specializes in filtering out thousands of the traditional heat-based fire alerts to prioritize only those burning large amounts of biomass (defined here as a major fire).*

See below for a more detailed breakdown of the results.

The Base Map is a screen shot of the app’s “Major Amazon Fires 2020” layer. 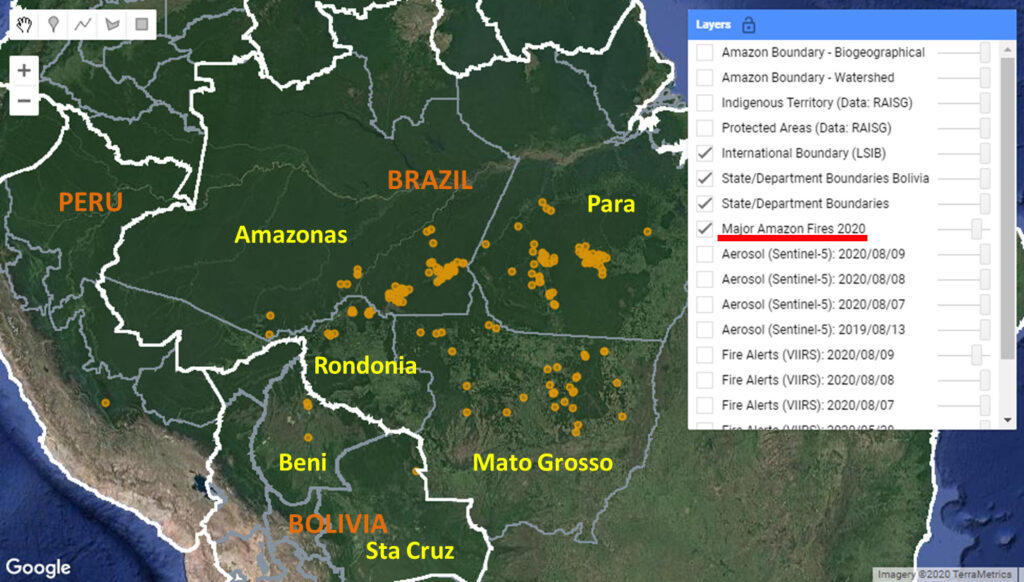 Importantly, the vast majority of the major fires in the Brazilian Amazon (85%) have burned recently deforested areas (cleared between 2018 and 2020) covering 280,000 acres (113,000 hectares). Thus, we argue that the central issue is actually deforestation and the fires are actually a smoking indicator of this forest loss.

We have detected the first two forest fires, burning 388 acres (1,447 hectares) in Mato Grosso and Para.

The rest of the major fires have been on older cattle or agricultural lands (deforested prior to 2018).

The most impacted protected areas are Jamanxim and Altamira National Forests in Pará. We emphasize, however, that these fires were burning recently deforested areas (not forest fires) and so, again, the primary issue is deforestation.

In Brazil, the vast majority of the major fires (94%) appear to be illegal as they violate the state and national government mandated fire moratoriums established in July. In fact, despite the moratoriums, the number of major fires is accelerating: 143 so far in August, following 64 in July, 12 in June, and the first one in May.

In the Bolivian Amazon, we have recently started detecting fires in the savannahs in the department of Beni. We also detected one fire in a recently deforested area in the Santa Cruz department.

In the Peruvian Amazon, we have recently started detecting fires in the upper elevation grasslands. The biggest one was actually within a protected area (Otishi National Park). There have also been smaller grassland fires near the buffer zone of upper Manu National Park.

Overall our key finding is that most major Brazilian Amazon fires are burning recently deforested areas, and not raging forest fires. Below is a series of satellite image time-lapse videos showing examples of recent deforestation followed by a major 2020 fire.