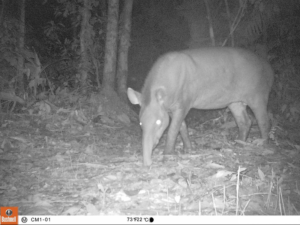 Our camera trap efforts at Santa Rosa de Abuná are part of our larger camera trap initiative to monitor biodiversity in the Amazon. To date, we have recorded well over 10,000 photos and videos from our camera traps, which enable us to track the presence of a variety of fauna including large, predators like jaguar, that are indicators of a healthy ecosystem.

Some of the species captured on our 76 camera traps at Santa Rosa have an endangered status (Near Threatened or Vulnerable) according to the IUCN Red List, including Jaguars, Giant Anteaters, Tapirs, and Pale-winged trumpeters. 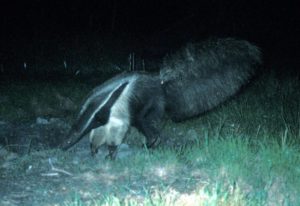 Showing consistent evidence of these species in our conservation area helps demonstrate to governments and others the need to protect the unique biodiversity that lives there. For instance, we have been able to show, through a density analysis of our camera trap efforts, that Santa Rosa and the indigenous territory of Tacana that we protect have a healthy jaguar population of 4.3-6.6 jaguars per every 100km2 (39 miles2). 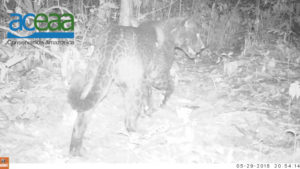 Our camera trap efforts in Bolivia have also caught on camera a jaguar (Panthera onca) with a very unique complexion. The animal is a melanistic jaguar, a color morph which occurs at about 6 percent frequency in populations, giving it an almost “black” look that is a stark contrast to the species normal orange/ brown complexion. This is the first time this type of jaguar has ever been recorded in the entire country of Bolivia.