As seen in this map on the left, during November 2016 the highest concentration of fire alerts (as detected by the VIIRS satellite sensor) were concentrated in the headwaters of the northern Amazon basin (departments of Cajamarca, Piura, and Lambayeque). 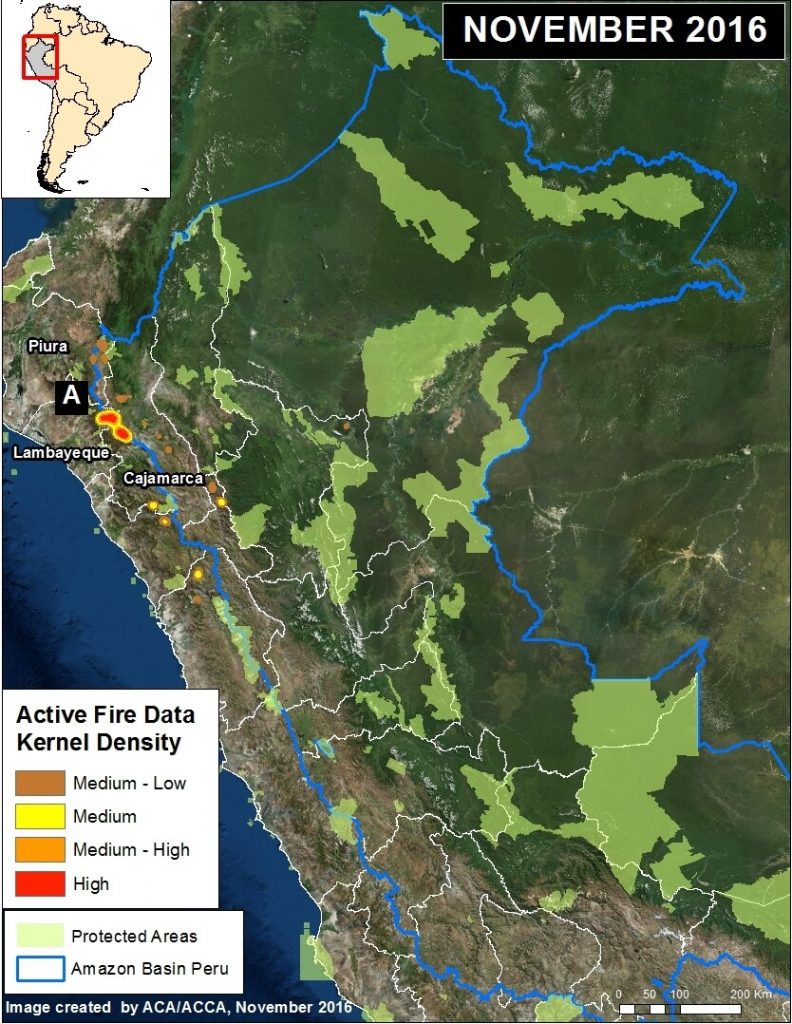 It appears that the primary cause of these fires is poor agricultural burning practices during a time of intense drought. These conditions allowed fires to escape into protected areas, including 6 national-level protected areas and 1 municipal protected area.

Until additional cloud-free satellite images are available it is difficult to quantify the total burned area. However, by analyzing the currently available imagery, we estimate 1,980 acres burned in 3 of the protected areas (Laquipampa Wildlife Refuge, Chicuate-Chinguelas PCA, and Cachiaco-San Pablo PCA). The Peruvian protected areas agency, SERNANP, estimates an additional 1,000 acres burned in the Pagaibamba Protected Forest. In addition, by analyzing fire alert data, we estimate that an additional 890 acres affected in the other 3 protected areas (Cutervo National Park, Tabaconas Namballe National Sanctuary, and Huaricancha PCA. See below for details.

Moreover, the Peruvian civil society organization SPDA is highlighting that one of the main problems is the lack of fire-related planning by the Peruvian government, which since 2001 has not fulfilled its mandate to create a National System of Fire Prevention and Control.

The image to the left shows a zoom of the area of interest with the high concentration of fire alerts, and highlights the 7 protected areas affected by the fires.

Note in the image (from November 21), the smoke columns inside and surrounding the protected areas. Below, we show a series of high resolution satellite images of these fires. 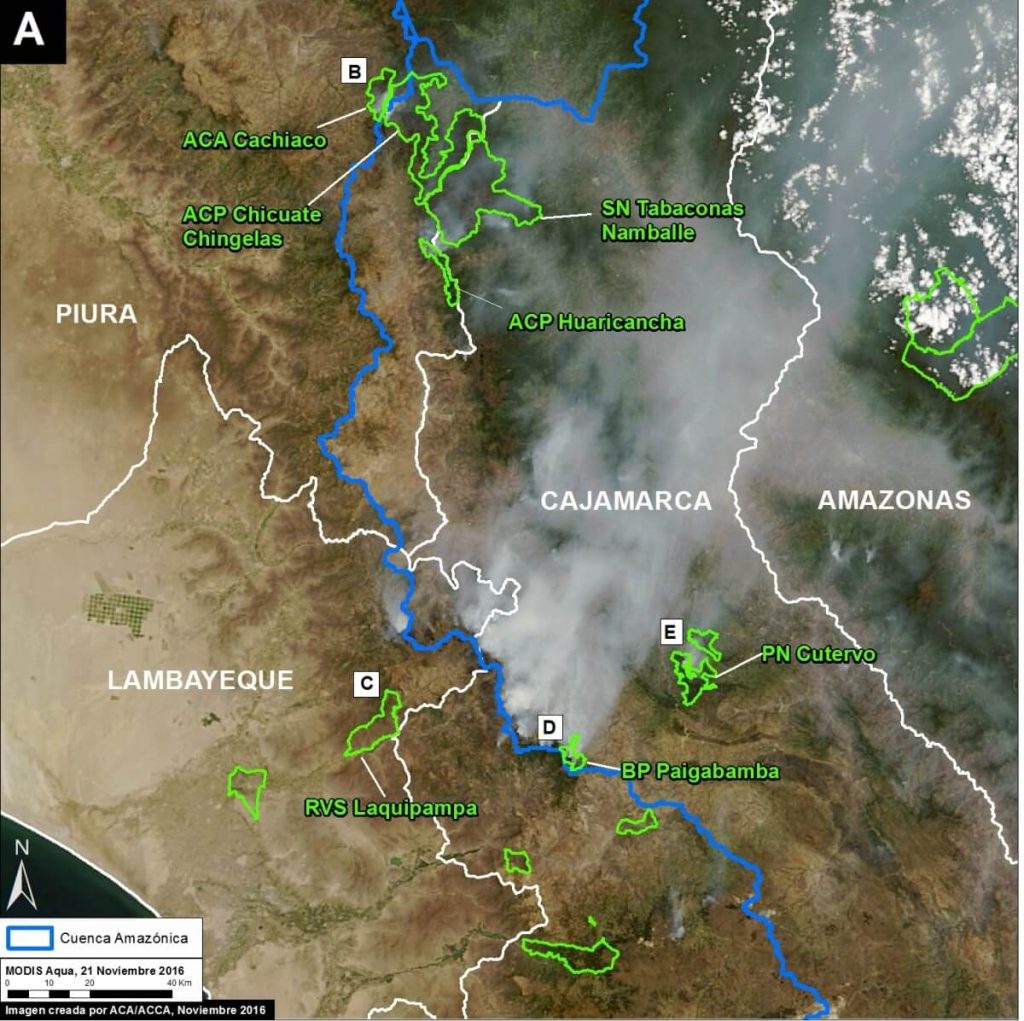 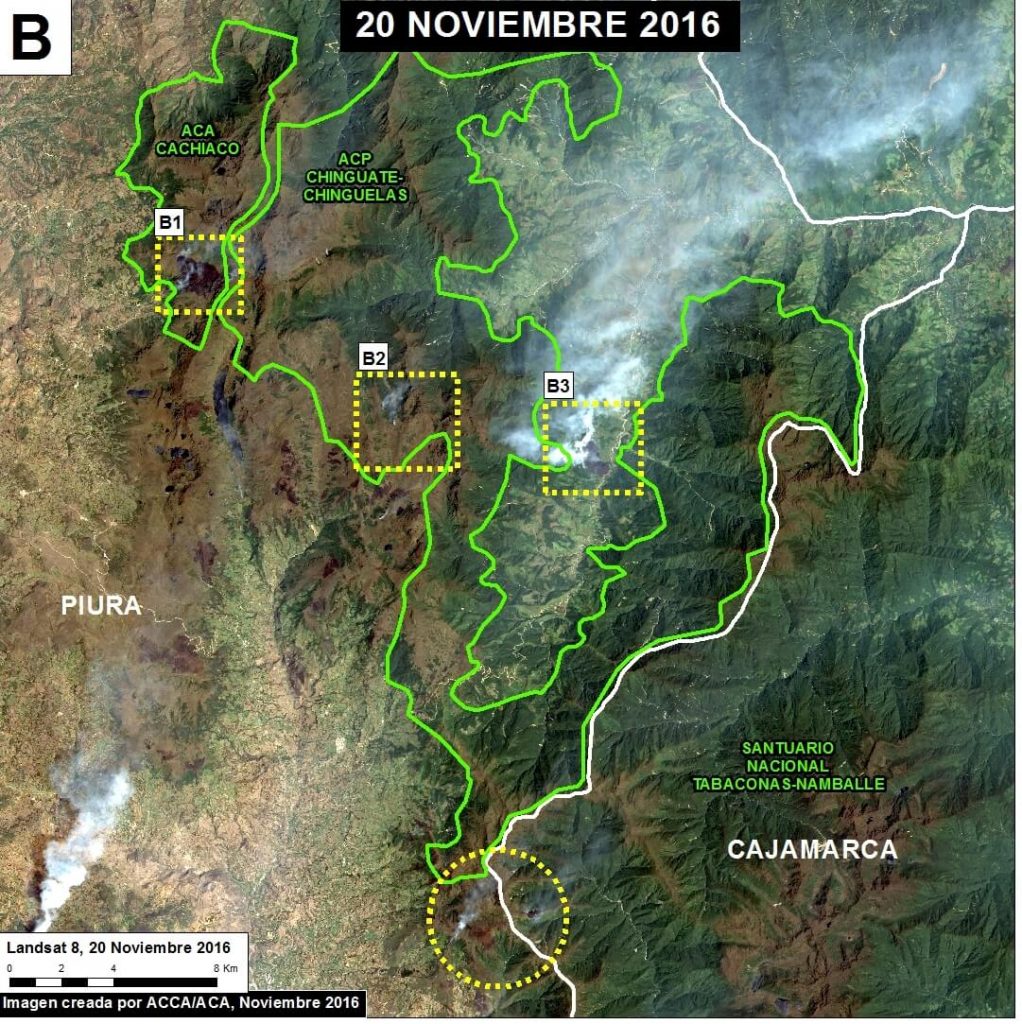 In the image at the top, the dashed yellow lines indicate where the fires were concentrated.

We estimate that approximately 2,125 acres have burned in these 4 areas.

The following images zoom in on the burn areas, showing them both before (left panel) and after (right panel) the fires. Note that in the right panels, the dark areas correspond to the burned areas. Also note that the paramo ecosystem was most affected.

The Laquipampa Wildlife Refuge is an important protected area that conserves one of the most threatened ecosystems in Peru, the Seasonally Dry Northwest Forests.

In the image below, the dashed yellow lines indicate where the fires were concentrated.

We estimate that approximately 250 acres have burned in the refuge.

The following images zoom in on the burn areas, showing them both before (left panel) and after (right panel) the fires. Note that in the right panels, the dark areas correspond to the burned areas. 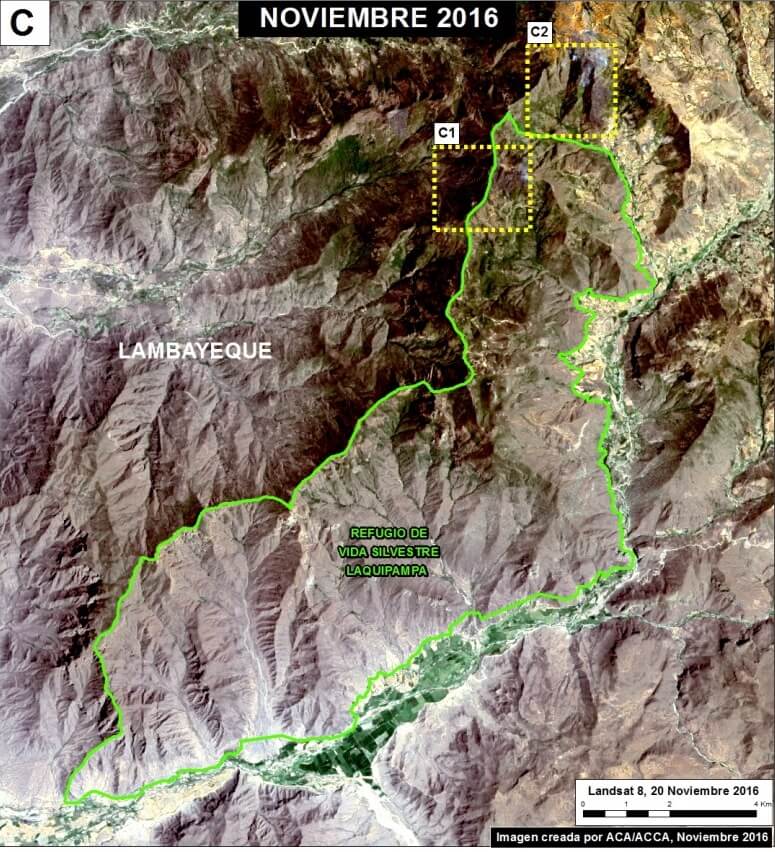 The Pagaibamba Protected Forest, home to an important ecosystem of paramo and montane forest that helps regulate local water supply, was another important protected area affected by the fires. 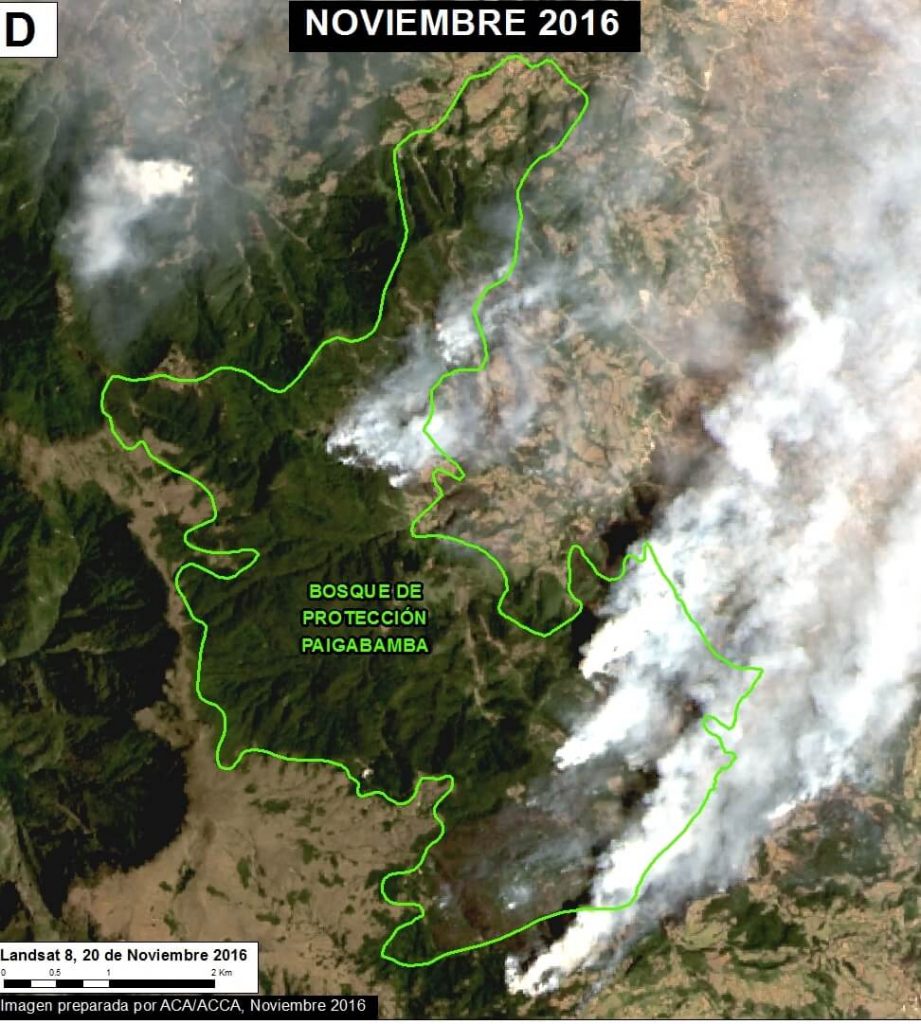 The image above shows the extensive smoke columns from 7 fire outbreaks during the peak burning in November.

Cutervo National Park, created in 1979, was the first protected area established in Peru. It too has also been degraded by the intense season.

The fire alerts indicate that around 494 acres burned within the national park. 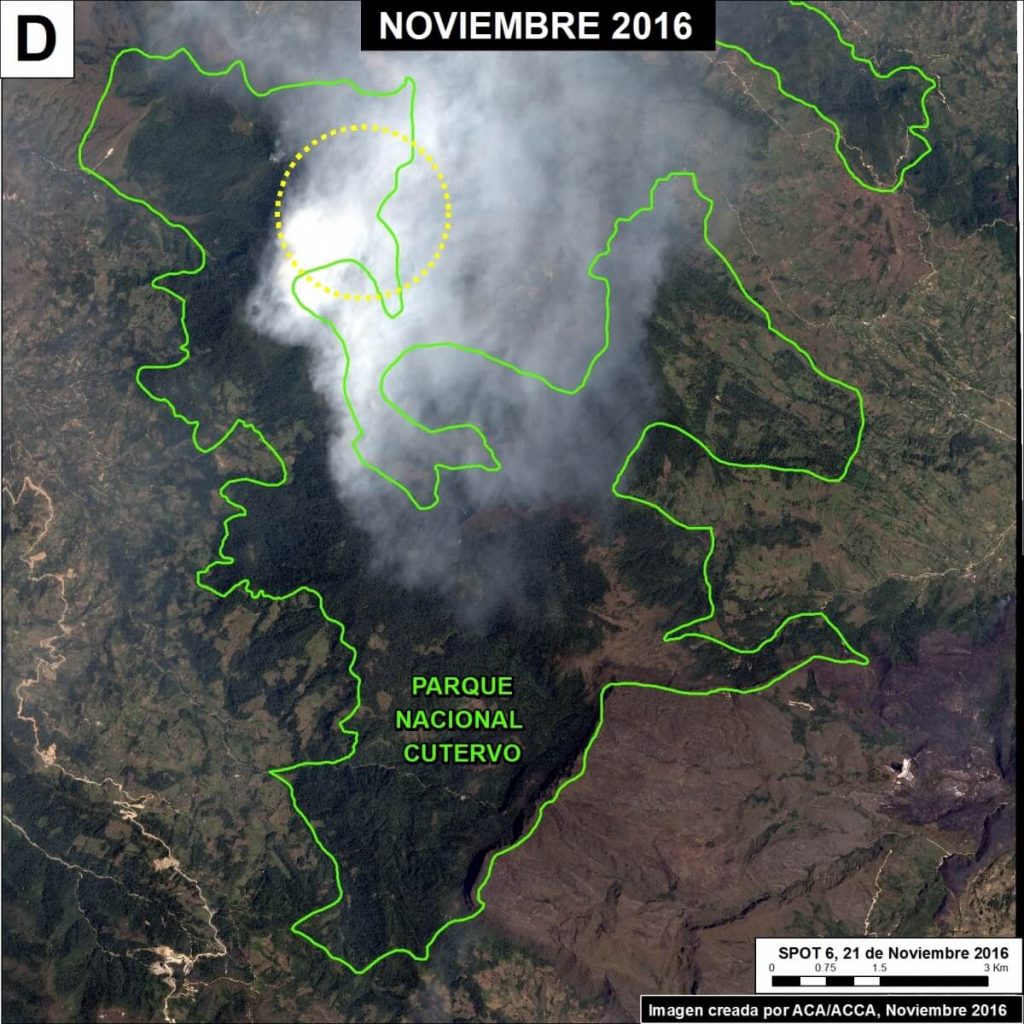 The image above shows the extensive smoke during the peak burning in November. The yellow circle indicates where the fire alerts were concentrated.