Recall that in Image of the Week #1 we documented how gold mining deforestation continues to expand within the Department of Madre de Dios (Peru) in an area known as La Pampa (1,700 hectares of new deforestation between 2013 and 2015). Here, Image of the Week #5 examines the area immediately to the west of La Pampa along the Upper Malinowski River, where we document over 850 hectares of additional gold mining deforestation between 2013 and 2015. Like La Pampa, most mining along the Upper Malinowski is illegal because it is outside the permissible mining zone and within the official buffer zone of a protected area. 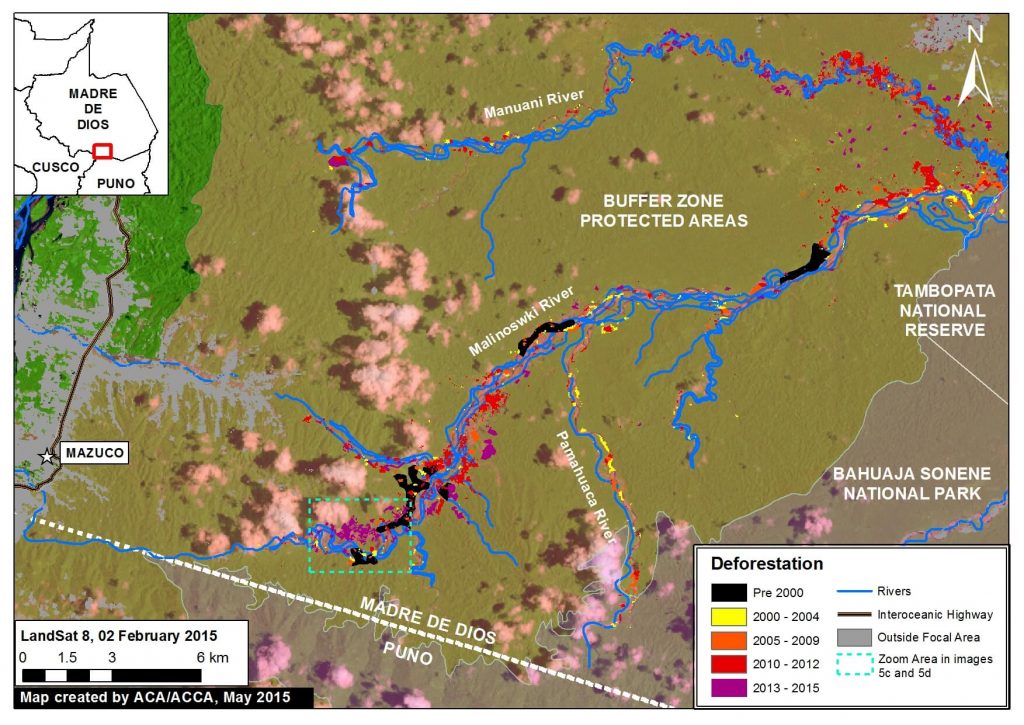 According to our CLASlite analysis, 864 hectares were deforested between 2013 and 2015 along the Upper Malinowski and nearby tributaries within the buffer zones of the Bahuaja Sonene and Tambopata protected areas.

Image of the Week Description

Background map is a Landsat 8 image (30 m resolution) from February 2, 2015. Any variation of green indicates forest cover. Note there is some scattered cloud cover. Data is from USGS. 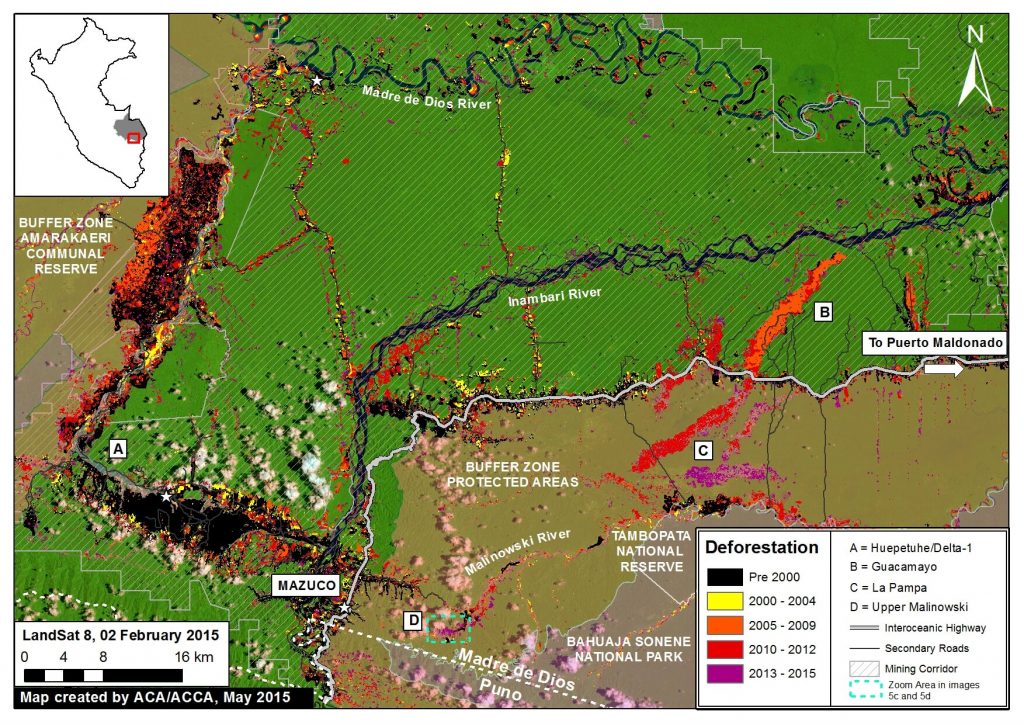 Image 5b. Madre de Dios mining zone, highlighting location of La Pampa and Upper Malinowski. Note that we did not include other land uses such as forestry concessions. Key data sources: MINAM, SERNANP, ACCA, Hansen/UMD/Google/USGS/NASA, USGS.

Image 5b provides greater context of the Madre de Dios mining zone, highlighting La Pampa at “C” (Image of the Week #1) and the Upper Malinowski at “D”.

The Permissible Mining Zone was established in 2010 and indicates the zone that the Peruvian Government has delimited as potentially legal for small-scale and artisanal mining activities, but only if miners succesfully complete a multi-step formalization process for each project. One of the key steps of this process is to resolve any land use conflicts due to overlapping land claims (for example if a section of the mining corridor overlaps with a forestry concession). Data is from ACCA.

Importantly, note that most gold mining in both La Pampa and the Upper Malinowski is illegal since it is located outside the permissible mining zone and within the buffer zone of two protected areas (Bahuaja Sonene National Park and Tambopata National Reserve).

Also note that on the lower Malinowski, deforestation is concentrated on the buffer zone side and largely absent on the protected area side. This striking pattern indicates that official protection status is much more of an effective deforestation deterrent than the looser buffer zone status. 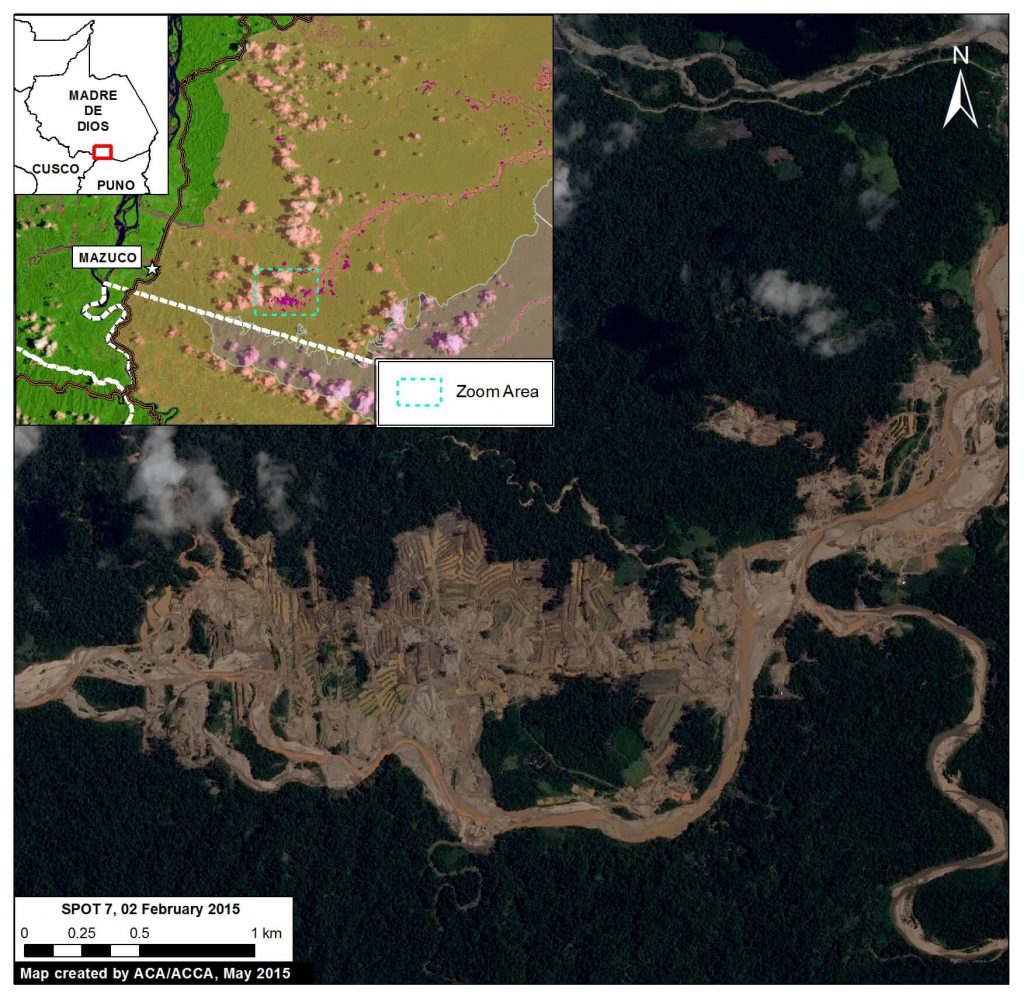 To better understand the driver of the deforestation along the Upper Malinowski, we acquired high resolution satellite imagery (SPOT 7 with 1.5 m resolution). As seen in Image 5c, the pattern of the recent deforestation is characteristic of gold mining, and not other possible drivers such as agriculture. Note that the purple outlines indicate areas that were deforested between January 2013 and February 2015 based on our CLASlite analysis (this image shows 492 of the total 864 hectares of recent deforestation). 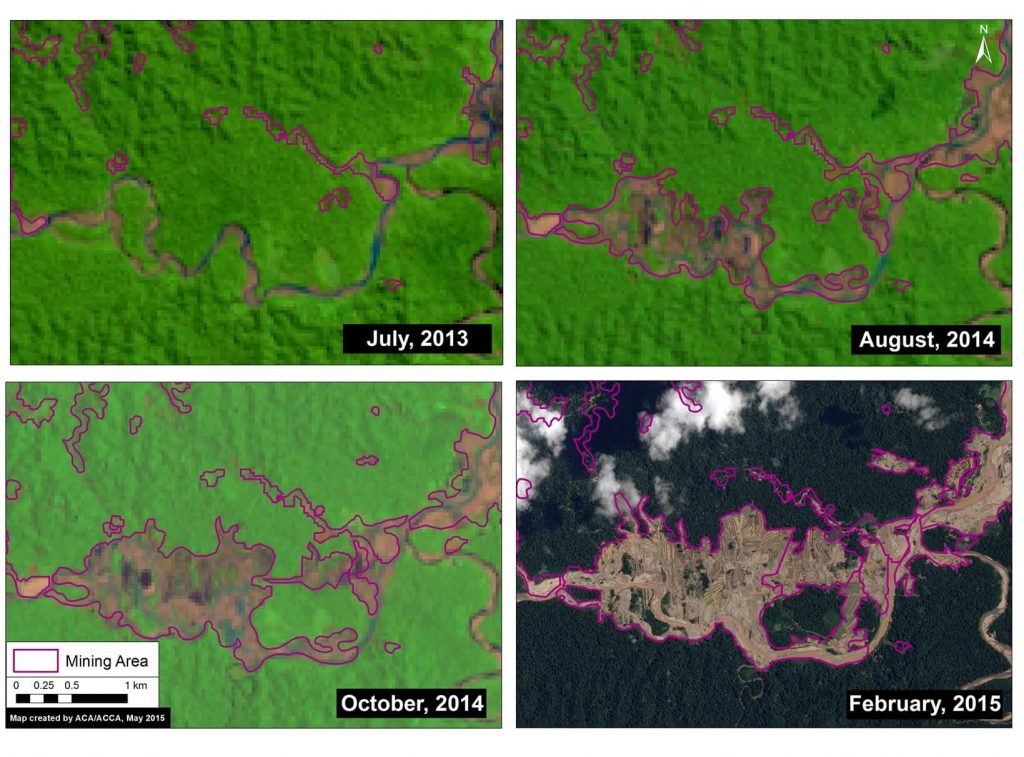 To better understand the deforestation dynamics over time along the Upper Malinowski, we created a satellite image (Landsat and SPOT 7) time-series. As seen in Image 5d, there was a rapid increase in mining deforestation in the less than two years between July 2013 and February 2015. Note that all four panels in Image 5d show the same location, but appear different because of the deforestation.