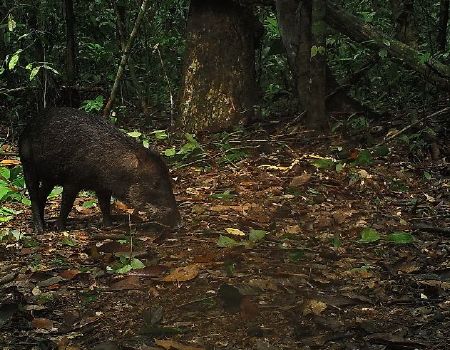 Researchers Dr. Andy Whitworth and Dr. Henry Pollock from Osa Conservation began a new research project at our Los Amigos Conservation Hub to assess how many white-lipped peccaries are present in the world’s first conservation concession.  This species has a vulnerable status with the IUCN red list and was recorded to have almost disappeared in this region of Peru for 12 years until we began to see it again at Los Amigos with prior camera trap photography efforts.

The team has already installed 30 camera traps in a grid covering 3.7 square miles (6 square km) to monitor this type of peccary and try to understand how healthy the local population is. This continued effort to learn more about this species will help guide our conservation efforts to keep it from moving closer to extinction.

Not only are we tracking peccaries at Los Amigos, but during the next few months researchers led by our co-founder Dr. Adrian Forsyth,  Dr. Alejandro Lopera-Toro, and scientists from the local University of San Antonio Abad Del Cuzco will be conducting studies on the diversity of beetles in the different types of forests around this Conservation Hub. They will also conduct ecological and behavioral studies around beetle species, helping improve our knowledge of these important supporters of the rainforest’s ecosystems.

We are looking forward to the new discoveries of our researcher friends!