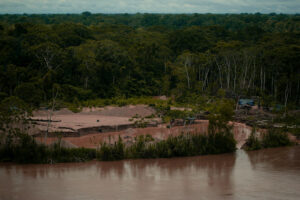 A study conducted at our Los Amigos Biological Station and recently published in Nature revealed that intact forests near gold mining areas provide a critical ecosystem service. They intercept and sequester massive amounts of mercury, keeping it from entering the global atmosphere and preventing it from poisoning nearby ponds and streams, where it is substantially more harmful to people and animals.

Gold mining has devastated the Madre de Dios region of Peru for decades. The extraction process consists of excavating river sediment in search of gold pieces. Miners separate the gold from the soil by mixing liquid mercury with the sediment, which they eventually burn off,  releasing mercury in the air. This contaminant ends up on plants’ surfaces and can be absorbed into the leaves. It can then enter soil when the leaves are either washed with rainfall or when the leaves fall to the forest floor.

In this study, postdoctoral researcher Jacqueline Gerson, who conducted this research while a PhD student at Duke University, sought to find out whether mercury was entering land surrounding mining sites in Peru. The study was done by collecting and comparing rainwater, air, leaf, and soil samples from two mining sites at each of three distinct locations: previously logged forests, jungle at least 30 miles (50 km) from these mining sites (“remote sites”), and the intact primary forests of Los Amigos, a 360,000-acre protected area that is a safe haven from the nearby mining.

They discovered that mercury not only penetrates soil near gold mining sites but that the forests located near these areas have some of the highest inputs of mercury ever reported in literature. And, they also found that this mercury is already affecting the local wildlife. When testing birds, they found that local birds have 2-12 times more mercury in their feathers compared to birds in more remote sites. A level this high threatens the species’ ability to reproduce, disrupting not only the offspring of birds but also throwing the entire food chain into potential chaos. This is a clear case and warning about what is happening to forests across the Amazon where gold mining – both legal and illegal – is happening. 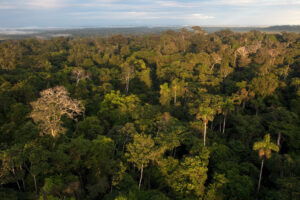 View of forest from the Los Amigos canopy tower

However, the study also highlighted the importance of keeping Amazonian forests standing and avoiding deforestation so that mercury didn’t become even more dangerous for humans and wildlife. “We found that mature Amazonian forests near gold mining sites are capturing huge amounts of atmospheric mercury, more than any other ecosystem previously studied in the entire world,” noted Gerson. The standing forests provide an incredible ecosystem service by scrubbing mercury out of the atmosphere and preventing it from entering lakes and ponds where a greater proportion of it will become methylmercury – the most harmful form of mercury. The forests at our Los Amigos Conservation Concession serve that function as they sequester atmospheric mercury from nearby illegal mining operations.

For wildlife and people, the risk of being affected by sequestered mercury – prior to mercury becoming methylmercury – is generally low. “You could walk through the forest, you could swim in the water, you could bury yourself in the leaves and you’re not going to get mercury toxicity from doing that,” Gerson assures. “The study really highlights the importance of continuing to conserve these forests, and the increased danger that would occur if these forests were cleared, because that would release the sequestered mercury back into the atmosphere or into nearby lakes and ponds where it could be consumed by people and animals. We always talk about how carbon sequestration is important. This is also an incredibly important service forests are providing.”

We hope this innovative study will provide policymakers with some of the vital data needed to prioritize the protection of Amazonian forests.

Help us keep making science happen in the Amazon.