Seeing red is not always a bad thing: a look inside a hummingbird’s flower!

The tiniest birds on Earth are one of the most astonishing living beings with an incredibly fast metabolic rate: hummingbirds! They are specialized nectar feeding organisms inhabiting only the Americas, and where the hummingbird-pollinated flowers provide them with the tasty and sweet solution to fulfill their high energetic demands. These plants use hummingbirds as a reliable, and long-range pollinator, and are generally characterized as odorless, with long-tubular corolla, conspicuous coloration, while also producing high sucrose-content nectar. Some of the most common plants families are the colorful Heliconiaceae, Rubiaceae, Fabaceae, Bromeliaceae. But even though hummingbirds pollinate and feed on several plant species, there is one large commonality that exists among most of them: their visible orange-red corolla. But is it actually the flower’s color that attracts them?

In general, color is a very critical cue for animals, and is mostly associated with the gaining of rewards. Among birds, the distinctive and the flamboyant hummingbird is a good example because vision is one of their most acute senses that they rely on to find their food and also mates. Hummingbird’s great vision -even better than humans- allows them to see colors near ultraviolet light, which is the reason why conspicuous flowers are highly visible to them.

Contrary to what might be expected, it is not only the bright red coloration that influences hummingbirds’ choice but instead a combination of traits. Conspicuous flowers are the first requisite to advertise the nectar to hummingbirds, where the conspicuousness will depend on the background where the flower is exhibited. For instance, heliconias resemble a wild bouquet with red flowers bursting at the top, surrounded by large and wide green stalks. Perfect for capturing hummingbird’s attention! 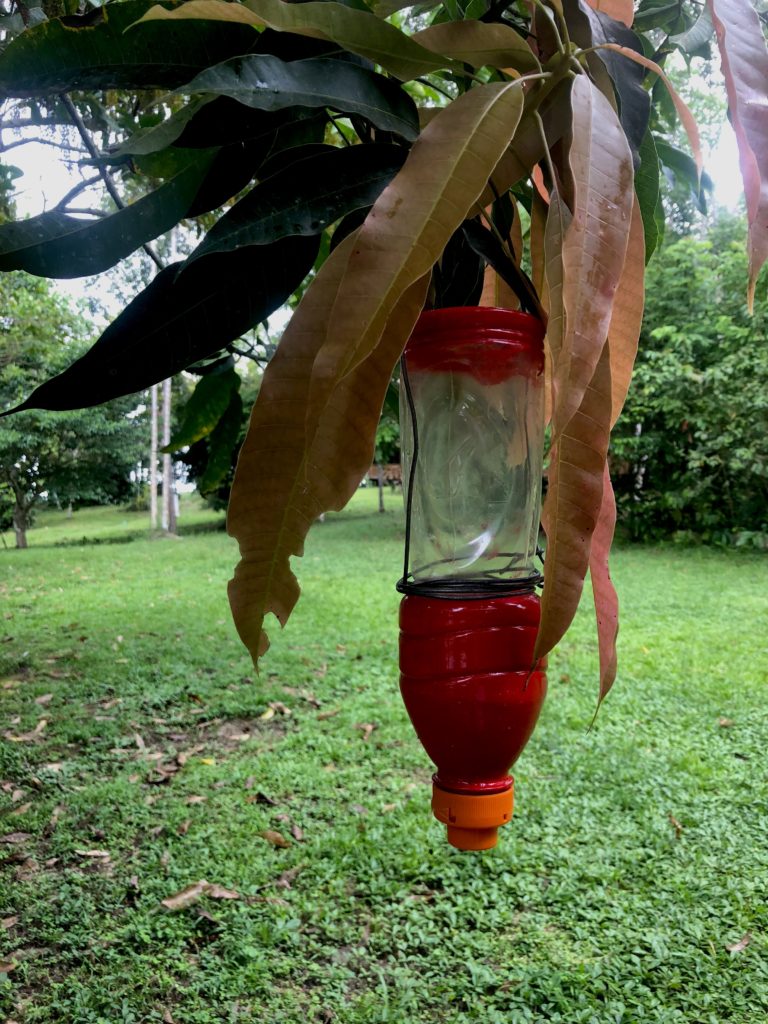 But what truly matters is what is inside that flower: the nectar. Research conducted in the laboratory suggested that higher sucrose concentration is more important than color or even other sugars (e.g. fructose, glucose) in determining hummingbird’s food choice. It is known that in tropical and temperate areas hummingbird-pollinated flowers have nectars with high concentration of sucrose. Thus, rather than discriminating due to color alone, hummingbirds learn how to associate colors and rewards, and once learned, they will go for the flower with the greatest reward – no matter coloration!

Hummingbird feeders are highly common outside of nature lodges or nature lovers’ homes. In fact, it’s easy to create your own hummingbird feeder to have outside of your house! Here’s how to make your own feeder using an empty water bottle (we find that Gatorade bottles are perfect feeders!) and red paint (or any color within the visible range!). Just remember that no matter the color you chose to paint the feeder, the most important thing is to ensure that you provide energetic and sweet nectar that can fulfill their voracious appetite.