State of the Amazon: Fires, Deforestation, and Climate Change Recap

Wednesday, September 7th, saw the first installment of our State of the Amazon Webinar Series. This edition’s focus was on Fires, Deforestation, and Climate Change. The webinar was co-hosted by us and the Norwegian Agency for Development Cooperation (Norad) and featured speakers from five of our partners representing five key Amazonian countries. Participants had the privilege of hearing from Fundación EcoCiencia (Ecuador), Instituto Centro de Vida (Brazil), Conservación Amazónica – ACCA (Peru), Conservación Amazónica – ACEAA (Bolivia), Fundación para la Conservación y al Desarrollo Sostenible (Colombia), and MAAP and Global Forest Watch from the US. The broad scope of our panelists and partners allowed us to offer a vast perspective on the threats of fires, deforestation, and climate change and their relation to forest loss from a global scale, down to a focused “on-the-ground” perspective of the effects of those same threats in the 5 different countries represented therein. Apart from their country-specific experiences with environmental threats to the Amazon, each presenter spoke about how fires, deforestation, and climate change are interrelated and work together to create challenging hurdles to achieve a thriving Amazon. Watch the full webinar recording here.

Hilde Dahl, Head of Section for Forests with Norad, opened the session by expressing the urgency with which the environment must be addressed, stating, “Without halting deforestation and bolstering reforestation with urgent action it will be impossible to meet the UN sustainable development goals and the goals of the Paris Agreement.” She also laid out some of the methods and objectives that the Norwegian government has committed to foster in order to address these concerns, including direct support for organizations and initiatives that are heading programs and processes to bolster the well-being of the Amazon with the over-arching goal of Norad being to prevent widespread tropical forest loss. Hilde added finally, “The Amazon is undoubtedly important for the health of our climate, but it is also simply home to millions of people.”

Carmen Josse from EcoCiencia moderated the discussion and opened by introducing the the two scientists presenting in the first section of the webinar – two wide perspectives of forest loss. First, a global perspective from Michelle Sims from Global Forest Watch and World Resources Institute. 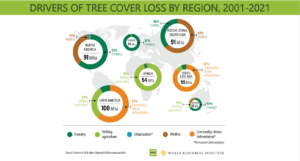 Our first presenter, Michelle Sims, from Global Forest Watch at World Resources Institute, presented a global overview on forest loss. She described what the data is telling us are the actual main drivers of forest loss today. She also presented where the most forest loss is happening by country, stating that Bolivia has overtaken Indonesia for third place for country experiencing most forest loss for the second year in a row. Interestingly, Michelle reports that commodities production, sourcing wood from tropical forests for manufacturing or clearing large swaths of forest for cattle raising, was also a significant driver of forest loss around the world in 2021.

Zooming in to a regional view of the Amazon as a whole, Amazon Conservation’s own Matt Finer, Director of the Monitoring of the Amazon Project, presented his latest findings using satellite imagery to pinpoint deforestation drivers and shared some thought provoking data. Dr. Finer clearly illustrated how fires, deforestation, and climate change only work to feed each other. These three environmental phenomena are often studied individually or separately, however, it is becoming more and more evident that deforestation brings about more fires and fires bring about more deforestation and both affect the climate and are a result of the changing climate, an interesting and powerfully dangerous relationship indeed. 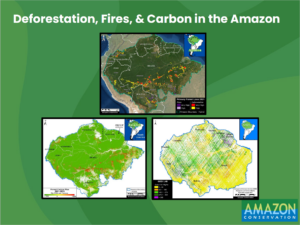 Implications for the Amazon (Bolivia) 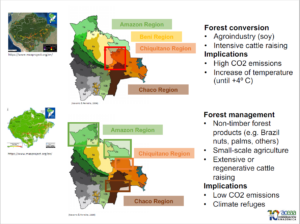 We heard our first country-specific perspective from Daniel Larrea, Science and Technology Program Coordinator from Conservación Amazónica – ACEAA. Daniel shared that one of the strongest drivers of deforestation in the Bolivian lowlands of the Amazon is forest clearing for cattle raising, a fact echoed by Michelle Sims’s global studies. Daniel reported that what the science is showing in Bolivia as a result of increased cattle production and decreased natural forest cover is an increase in CO2 levels and an increase in high temperature changes in the region’s climate. Daniel ended with a powerful quote summing up the goals of his and ACEAA’s work saying, “If we protect our forest they will be healthy. If our forest are healthy, they will be productive. If they are healthy and productive, they will be resilient.”

Science and Data for Advocacy and Action (Brazil) 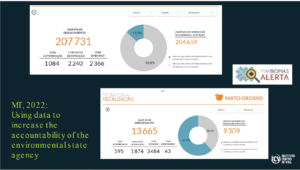 Alice Thuault, the Executive Director of Instituto Centro de Vida (ICV), then explained that the future of the Amazon depends scientists and advocacy groups to use the data these new technologies are showing us to reinforce each others’ efforts and best protect the forest. She pointed out that the Amazon is a vast region, one that spans at least 9 countries, that requires strong coordination and action from multiple entities to ensure its protection. Luckily, we have organizations like ICV and the rest that presented at this webinar who are actively heading this union of scientific data and advocacy work to better inform conservation efforts throughout the entire Amazon forest.

Understanding the Arc of Deforestation and Road Construction (Colombia)

Luz Alejandra Gomez, GIS Coordinator with Fundación para la Conservación y el Desarrollo Sostenible (FCDS), presented some of her recent work with high-resolution satellite imagery that helped us all to better understand the trends of deforestation in Colombia specifically caused by the construction of new roads. If you have kept up with any  of our MAAP reports, you already know that carving out new roads or even maintaining pre-existing roads is a significant driver of deforestation in the Amazon. Accordingly, Luz Alejandra’s findings show a slight uptick of deforestation caused by road construction from 2019 up to the present, especially surrounding legally protected national parks and reserves. She also offered a stark reminder that the current main objective of these roads is to provide access and link to similarly illegal and unregulated farming and other sites of extractive activities. 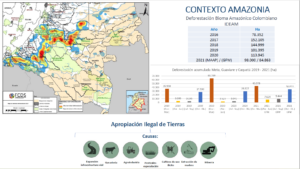 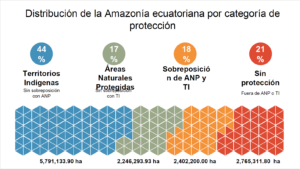 Attendees then heard from Carmen Josse, Executive Director of Fundación EcoCiencia. Carmen presented an informative look at the composition of the Ecuadorian Amazon regarding land use and classification. 44% of the Ecuadorian Amazon is dedicated Indigenous Territory, 18% is both Indigenous Territory and Natural Protected Area, 17% is Natural Protected Area only, and 21% is without any protection whatsoever. Over all of these combined areas, we see from EcoCiencia’s data that up to at least 14% of the Ecuadorian Amazon is experiencing deforestation due to agricultural activities, authorized or otherwise. Carmen reports that since 2001, EcoCiencia has confirmed 623,151 hectares of deforestation and areas dedicated to extractive mining activities have tripled since as recent as 2010. 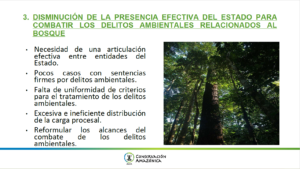 For our last country-specific presentation, Humberto Balbuena, Director of Policy and Environmental Governance at Conservación Amazónica – ACCA, offered a look at important conservation and governance efforts in Peru. Humberto identified a few main hurdles to conservation faced by governance objectives. 1) Increase in agricultural activity in forested areas that have potential for greater sustainably productive practices. 2) Expansion of illegal mining activities. 3) A decrease in state presence to effectively combat environmental crimes. 4) Delays in the process of institutionality in the forest sector. Humberto highlights these obstacles as a reminder that the fight to protect the Amazon has to be won not only on-the-ground in the forest, but also within policy and legal frameworks. By using monitoring systems and near real time reports, policy makers and legal actors are better equipped to take justified and informed stands against illegal activity in the Amazon.

Carmen Josse moderated our Q & A session in which attendees could pose questions to each or all of the speakers. One question pur to Dr. Matt Finer was, “What is the impact of Indigenous Territories and Protected Areas on fires and deforestation?” To which he responded and showed on maaproject.org, “…pretty remarkably we can clearly see that the best protections against the Amazon continue to be Indigenous Territories and Protected Areas. You can almost draw a map of these two classifications based on where the fires are not.”

Carlos Nobre provided some profound statements on the urgency of protecting the Amazon when issuing his closing remarks, especially, “We know very well that the Amazon is near its tipping point. Fires, deforestation and climate change are synergistic obstacles which make each other more difficult to combat. The saving grace of the Amazon is its incredible ability to recycle water throughout its ecosystems. Without urgent action, this land use change that we are seeing become the trend, could take away that ability from the Amazon and see it turned into what would be more closely related to a dry savannah.”

To view the full question and answer session and watch the entire presentation, click here.