The Grey-bellied hawk (Accipiter poliogaster) is a rare diurnal raptor of the Accipitridae family and is distributed throughout the Neotropics. BirdLife has it listed as a “near threatened” bird and, despite their wide distribution, it is one of the least known of the raptors. In Peru, it occurs in the eastern side of the country, mostly in lowland tropical forests, and has been also reported along forest edges, and fragmented forest. Since 2015, birders at Los Amigos have been able to observe and admire the beauty of this raptor. This represents a unique opportunity to learn and increase the scarce knowledge about this species. In this note, we recapped A. poliogaster sightings at Los Amigos (LA).

In June of 2015, a Peruvian researcher specializing on raptors (R. Piana), found a juvenile A. poliogaster hunting at the forest edge near the Los Amigos River, at LA. The following year, September of 2016, Fernando Angulo (LABO Advisory member) and R. Piana located a reproductive pair defending their territory located ~1 km away from the station. Both individuals were sighted in the same location on consecutive days after the first encounter. On April of last year, a Peruvian bird guide, identified a juvenile of this species around LA garden, close to the territory identified the previous year. Lastly, on mid-April of the present year (2018), two juvenile individuals were located on a nest situated on an emergent tree and in the same territory of the reproductive pair previously identified. These events prove that A. poliogaster is breeding and nesting within the Los Amigos Biological Station, making this place a unique study site for this species. 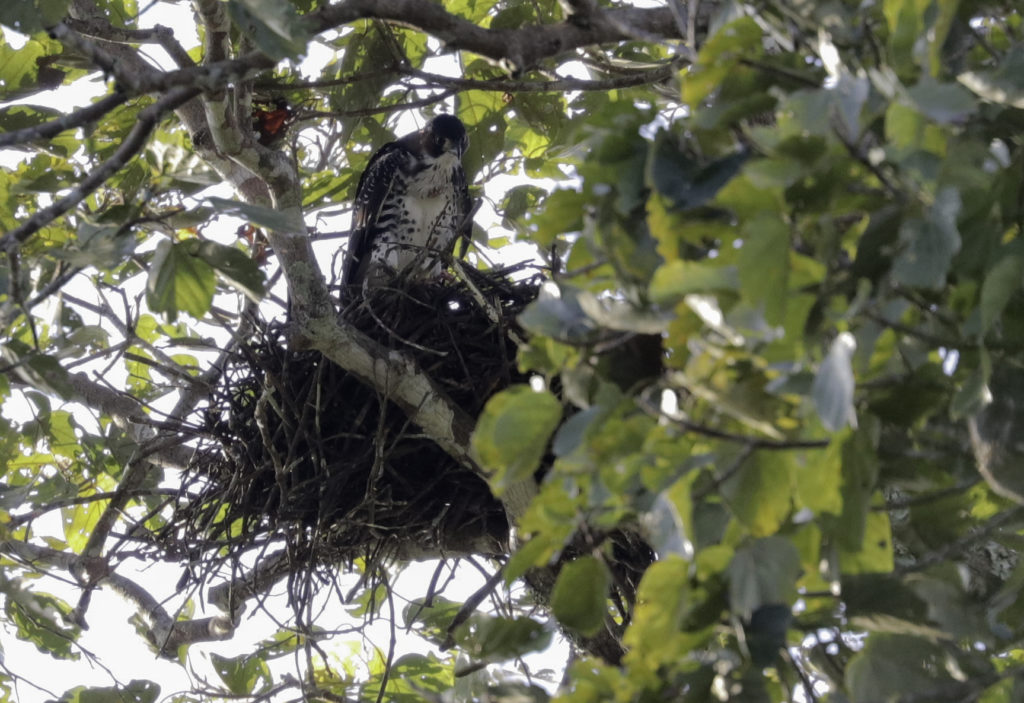 The first recorded observation of the reproductive behavior and biology of A. poliogaster were described in Southern Brazil few years ago, where an adult female was observed incubating two eggs and an adult male was actively hunting. Only one nestling survived, and after ~49 days post-hatching the nestling left the nest. The fledging was fed by the female for ~90 days post-hatching. Given the importance of raptors in Neotropical forest, and LABO’s goal to increase the knowledge and conservation efforts of Neotropical avifauna, one of our Franzen fellows, Igor Lazo, will be assessing the ecology and natural history of A. poliogaster at LA, being the first study of this species in Peru. The information coming out from this project will create a firm foundation for further research on the Grey-bellied hawk!