AmazonTEC 2020 Key Takeaways: Towards a Regional Agenda for Action in the Amazon 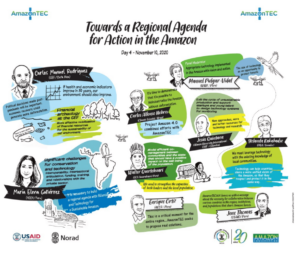 The fourth of five sessions of the annual AmazonTEC event, titled Evento De Alto Nivel: “hacia Una Agenda Regional Para La Acción Amazónica”  focused on considered the challenges facing the Amazon, and panelists discussed the role of science and technology in achieving its protection and brainstormed the necessities for an actionable agenda for the region. Click here to watch the recording of the fourth session (in Spanish). 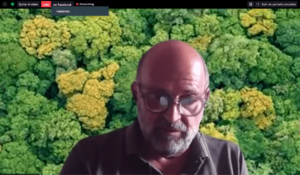 Carlos Manuel Rodríguez, currently the CEO and President of the Global Environment Facility (GEF) and Former Minister of Environment and Energy of Costa Rica, began with a keynote presentation about human impact throughout the years on the environment. He said, “Human indicators have evolved, however, there is less wildlife, fewer hectares of forest, and more concentration of carbon. We must see how we can make a lesser impact with the resources we need.” He adds his vision for the future saying that, “I hope that in 30 years, countries have understood the importance of managing their natural capital, as we do for the financial/human capital. Then we can create a framework that doesn’t guarantee use of natural resources because of social objectives.”

María Elena Gutiérrez, Executive Director of our sister organization, Conservación Amazónica – ACCA, gave a brief introduction about combining technology and politics for the protection of the Amazon towards a regional agenda. She said that “AmazoTEC is a multi-stakeholder platform that has allowed dialogue and advising of solutions. We need an integration of technologies for the conservation of forests.” 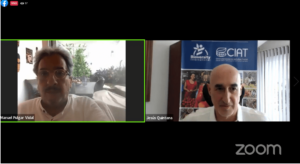 The first panel focused on technology, forests and development towards a regional agenda for the Amazon and was moderated by Manuel Pulgar Vidal, Climate and Energy Lead of the World Wildlife Fund (WWF) and Former Minister of the Environment of Peru. He stressed the need for calculated action that appropriately responds to objectives on the ground. “Technology has to respond to a collective vision of the Amazon. Second, it has to respond to its needs. We must avoid falling into the trap of discourse and support concrete actions.” He also emphasized the needs of the communities when making decisions saying that, “‘Amazon appropriate technology’ is that which corresponds to the worldview of their communities, which responds to their needs and threats.” 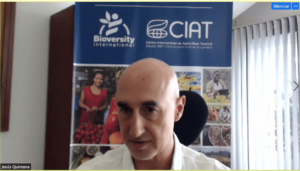 Jesús Quintana García, Managing Director for the Americas of the Bioversity International Alliance and the International Center for Tropical Agriculture (CIAT), Colombia, spoke about applied research for the development of the Amazon region. Thus he emphasized a strategy based on data and research saying that, “The magnitude of the challenges we have in the Amazon is so great that we need new approaches based on science, technology and innovation, greater resources and collaborative work to change paradigms.” However, he emphasized the need for public support of the proposals adding that, “without involving society, we won’t be able to have that support that we need from all countries. We must get out of the unsustainable production cycle. Stakeholder collaboration is key and must be inclusive “ 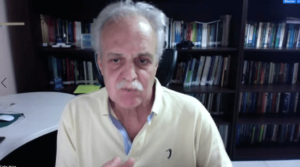 Carlos Nobre presented on the “tipping point” of the Amazon, a subject that he has talked about in interviews for news publications, and stressed the need for a new bioeconomy. He said that at the current rate of deforestation in the Amazon, “In 30 and 50 years the forest disappears, it becomes a degraded savanna and is a point of no return. (…) Now is the time to show that the Amazon can be bio-industrialized,” said Brazilian environmental scientist Carlos A. Nobre. He currently serves as the Coordinator of the Center for Advanced Climate Studies and Member of the Brazilian Academy of Sciences. 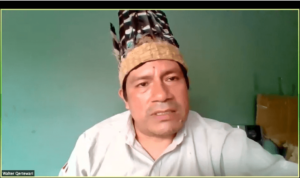 Walter Quertehuari, President of the ECA Amarakaeri Communal Reserve added the perspective of indigenous communities. “Since 2018 we have used an application for surveillance, mobile mapping implies participation of the community members. Strengthening the forest requires strengthening the economic life of the inhabitants. We speak of a shared management with the active participation of indigenous peoples…they’re the best allies/protectors of natural areas.” 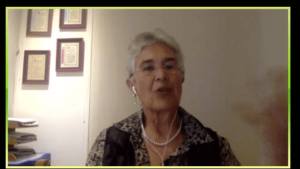 Yolanda Kakabadse, Founder of Fundación Futuro Latinoamericano (FFLA). Former Minister of the Environment of Ecuador spoke of the agenda in the Amazon region from civil society. One of the challenges she mentioned was that, “There is little coordination between countries and if there is no alignment of governments there is no foundation.” She also added the importance of training people that live in the communities as well as those in higher-level organizational positions saying that, “we should promote the development & use of technologies that have a much longer, useful lifespan. That implies training, education and participation…not only of experts, but also of people on the ground.” 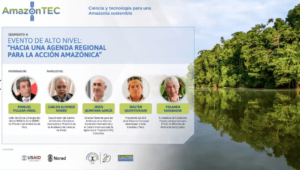 Jene Thomas, Director of the United States Agency for International Development in Peru, USAID Peru, gave closing remarks for the Spanish sessions of AmazonTED praising the conference as an “an opportune space to make visible progress and needs to conserve the Amazon. It leaves a message about the need for collaboration between governments, institutions and populations that share the Amazonian forests.”