GLAD alerts are a powerful new tool to monitor forest loss in the Peruvian Amazon in near real-time. This early warning system, created by the GLAD (Global Land Analysis and Discovery) laboratory at the University of Maryland and supported by Global Forest Watch, was launched in March 2016 as the first Landsat-based (30-meter resolution) forest loss alert system (previous systems were based on lower-resolution imagery). The alerts are updated weekly and can be accessed through Global Forest Watch (Image 40a, left panel) or GeoBosques (Image 40a, right panel), a web portal operated by the Peruvian Ministry of Environment.

In MAAP, we often combine these alerts with analysis of high-resolution satellite imagery (courtesy of the Planet Ambassador Program and Digital Globe NextView service) to better understand patterns and drivers of deforestation in near real-time. In this article, we highlight 3 examples of this type of innovative analysis from across the Peruvian Amazon:

In the previous MAAP #18, we documented the proliferation of logging roads in the central Peruvian Amazon during 2015. In recent weeks, we have seen the start of rapid new logging road construction for 2016. Image 40b shows the linear forest loss associated with two new logging roads along the Tamaya river in the remote central Peruvian Amazon (Ucayali region). Red indicates the 2016 road construction (35.8 km). Insets A and B indicate the areas shown in the high-resolution zooms below. 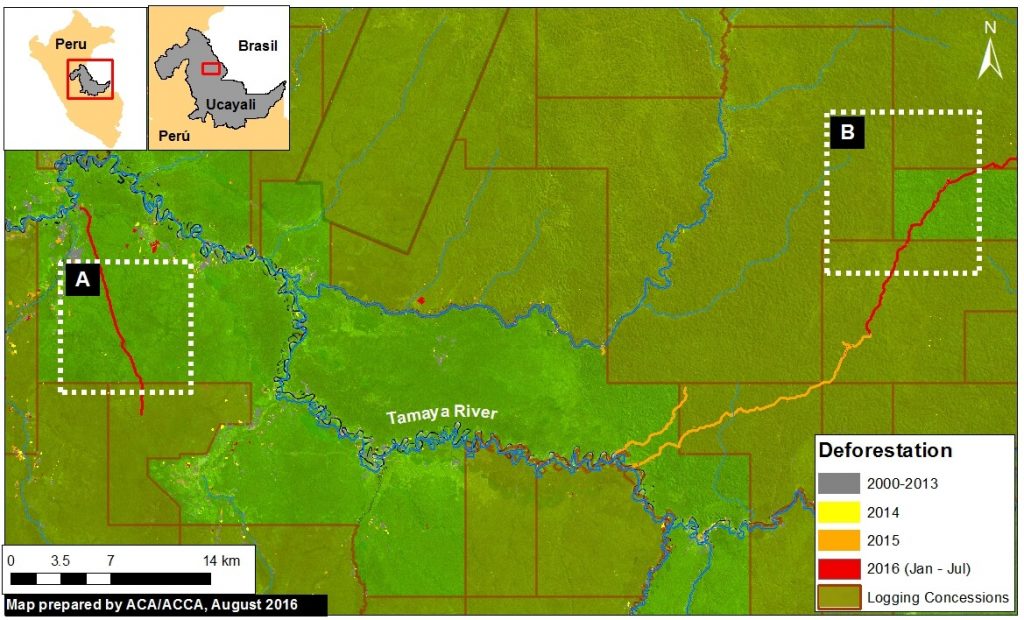 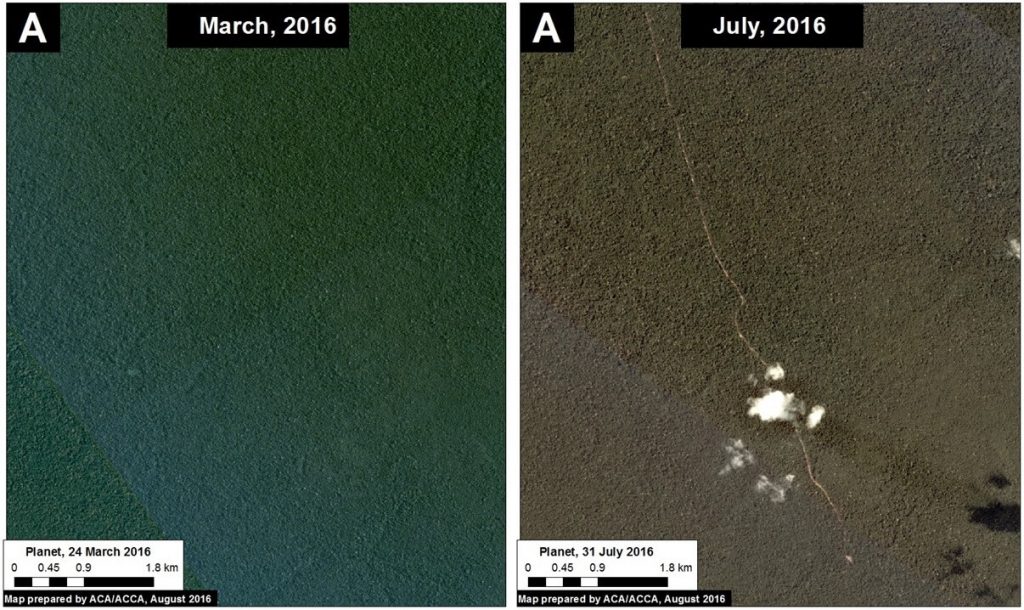 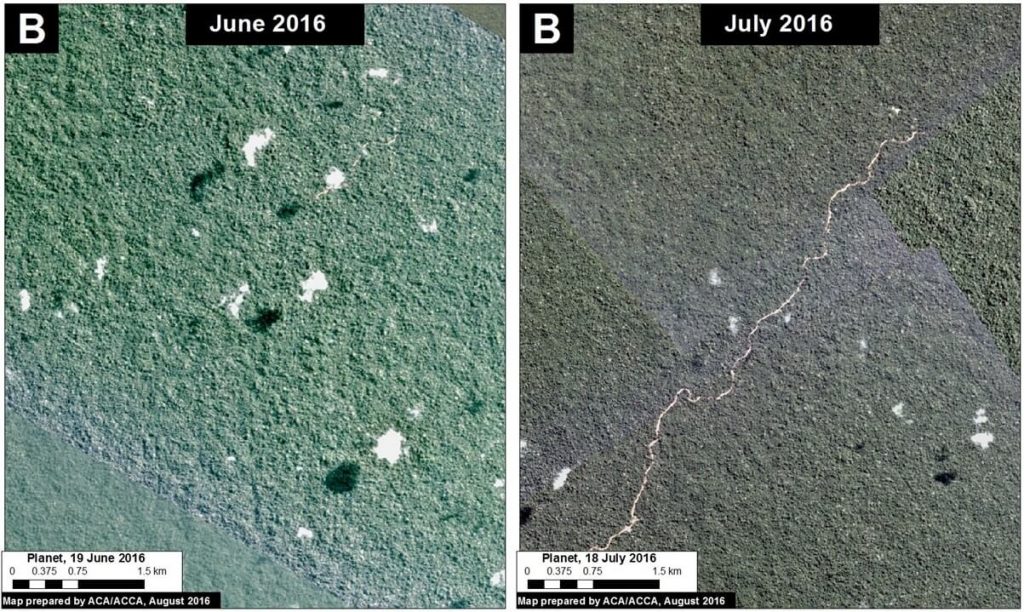 Image 40e shows the recent deforestation within two ecotourism concessions along the Las Piedras River in the Madre de Dios region. Red indicates the 2016 GLAD alerts (67.3 hectares). Note that the Las Piedras Amazon Center (LPAC) Ecotourism Concession represents an effective barrier against deforestation occurring in the surrounding concessions. According to local sources, the main drivers of deforestation in the area are related to the establishment of cacao plantations and cattle pasture (see s MAAP #23). Inset A indicates the areas shown in the high-resolution zoom below. 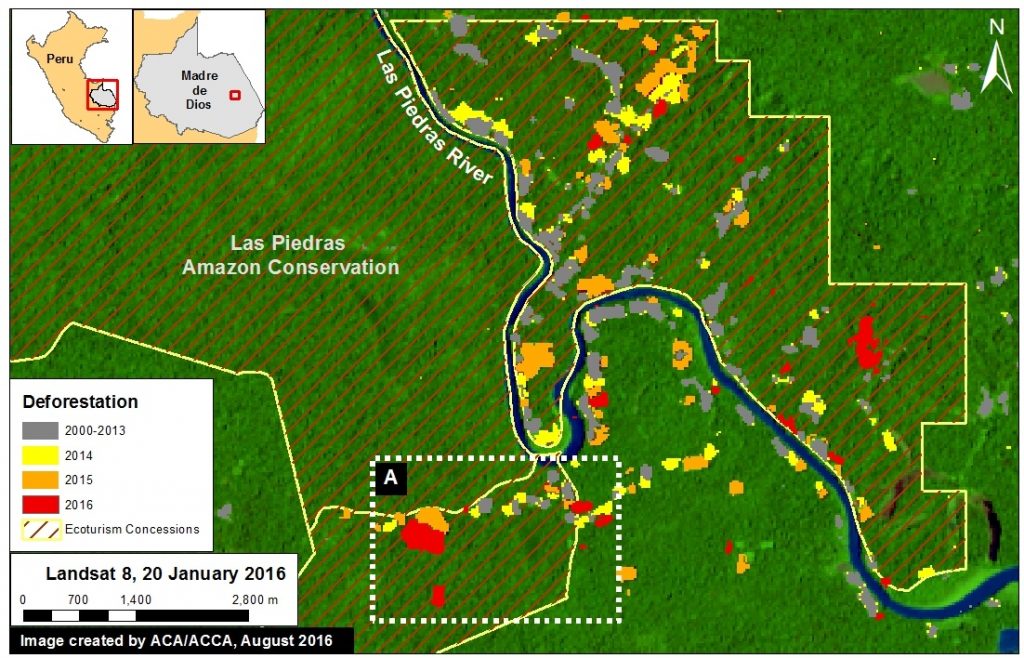 Image 40f shows high-resolution images of the area indicated by Inset A between April (left panel) and July (right panel) 2016. The yellow circles indicate areas of deforestation between these dates.

Image 40g shows the recent deforestation within the western buffer zone of the Cordillera Azul National Park in the Loreto region. Red indicates the 2016 GLAD alerts (87.3 hectares). It is worth noting that this area is classified as Permanent Production Forest, not as an agricultural area. 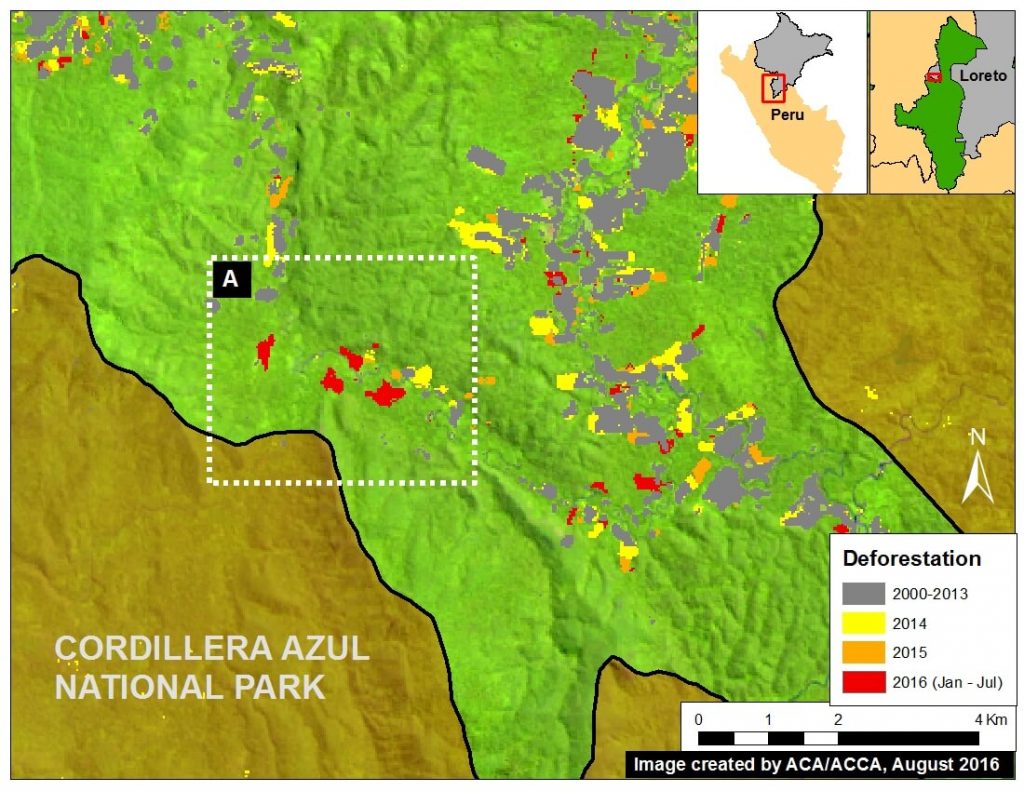 Image 40h shows high-resolution images of the area indicated by Inset A between December 2015 (left panel), January 2016 (central panel), and July 2016 (right panel). The yellow circles indicate areas that were deforested between these dates. The driver of the deforestation appears to be the establishment of small-scale agricultural plantations.