There is nothing like eggs for breakfast: Great tinamou eggs predation at Los Amigos

Daily and long hikes in the forest always unveil remarkable events in nature, events that could be easily overlooked if our curiosity for understanding nature and its complexity didn’t exist. LABO is currently studying the ecology of the 11 sympatric tinamou species that cohabit Los Amigos forest. Therefore, any observation of these ground-dwelling birds in the field is highly valuable. This past, late November, a Great tinamou nest was found with eight enormous and perfectly bright turquoise eggs. It was found in the middle of primary floodplain forest, two meters off a trail, and right below a tree with big buttresses. Unfortunately, a male tinamou, whose presence would have certainly increased the survival rates of these beautiful eggs, was not found incubating the nest but instead the turquoise color were spotted decorating the dark-brown forest floor during a rainy day at Los Amigos.

Few weeks ago we described tinamou egg coloration, and how male incubation and high nest attendance increase the threats posed by the bright coloration of tinamou’s eggs. Great tinamou (Tinamus major) are one of the largest (1500 g) tinamou species in Amazonia, laying large (56 – 63 mm), turquoise colored eggs between buttresses right on top of brown leaf-litter on the forest floor, without an elaborated and secured nest. Studies on the incubation behavior and nest attendance of Great tinamous have reported that males protect their eggs feverishly, unwilling to leave the eggs and remaining immobile during incubation, even allowing researchers to touch them! But, clutch abandonment can occur when the individual is highly or constantly disturbed, forcing the tinamou to leave and fly quickly out of the nest. Unlike other birds such as emperor penguins, Great tinamous do not choose and have one partner throughout their life but instead they are highly promiscuous. A female mates with different males, and then lays the eggs that will be incubated by the males. Males can incubate clutches of a single female (3 eggs) or of several females (up to 8 eggs).

The Great tinamou clutch (8 eggs) found at Los Amigos, was most likely laid by several females and abandoned by the male tinamou after constant human disturbance (i.e. researchers presence along the trail) near the nest. A camera trap was deployed near the clutch in order to record the -hopefully- return of the male tinamou or most likely observe their predation. The male tinamou did not come back, but instead of being left with nothing exciting happening to the nest, the camera trap recorded several independent moments of predation. The nest was frequently visited by rodents, three times by a tayra (Eira barbara), and four times by a white-throated toucan (Ramphastos tucanus).  During the total number of visits of the tayra and toucan, they took 4 and 3 eggs each respectively. The remaining egg could have broken, with the content being eaten by the rodents or tayra that was sighted once without taking any egg from the nest. All these events happened in one month, after which the clutch vanished, leaving us with the hope that somewhere else in Los Amigos forest, another male is peacefully incubating a tinamou clutch!

Last year, we began the search for the most talented and passionate students and/or professionals that have found their greatest inspiration and reason to protect the Amazon rainforest to be birds.

Sunrise on a steamy tropical palm swamp; the daily ritual at a salt-rich clay lick; and scores of amazing birds that you have only seen in a field guide, inspiring the mantra, “I must see that bird!” The Amazon Conservation birding circuit offers these and myriad other nature experiences that inspire a lifetime of amazing memories.

Our board member Tom Lovejoy, the renowned biologist and “godfather” of biodiversity, once said “If you take care of birds, you take care of most of the environmental problems in the world.”

If one of the things you want to accomplish in 2018 is to travel, take this chance to make your plans to visit Peru! As one of the world’s 10 megadiverse countries, including over 1,800 bird species, with hundreds of endemic plants and animals, with rich cultural destinations such as Machu Picchu, and its delectable cuisine, Peru is not to be missed! What are you waiting for?

As we begin a new year, we make an initial assessment of 2017, estimating deforestation hotspots in the Peruvian Amazon based on early warning alert data.* 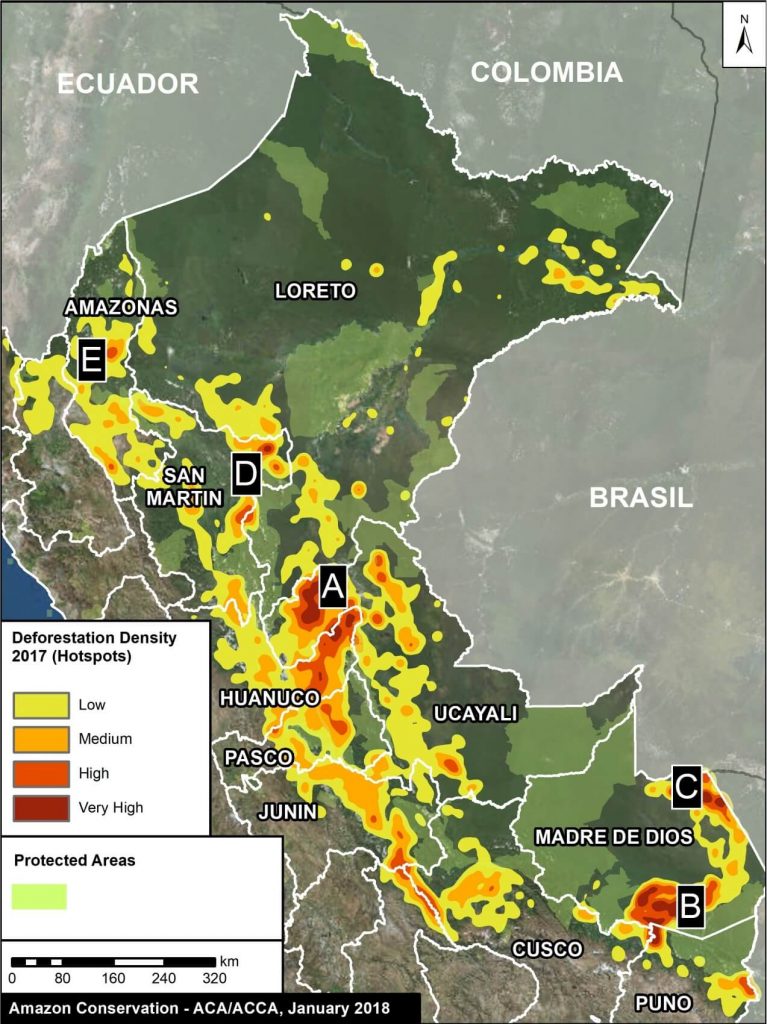 Deforestation, however, is still widespread. The base map shows the most intense hotspots (areas with highest density of forest loss).

The two main deforestation areas are clearly seen: the central Amazon (Ucayali/Huánuco regions) and the southern Amazon (Madre de Dios). Also, there are several additional hotspots scattered throughout the country.

We present satellite images (slider format) of the most intense hotspots. The images reveal that the main deforestation drivers include gold mining, oil palm, and general agriculture (crops and livestock).

The hotspots detailed below are:

The majesty of Amazonian blue skies and the guardians of the forest have one name and it is: macaws. Their bright colorful plumage and strenuous calls bring harmony to Los Amigos landscape and are a pure delight to the human eyes. Unfortunately, these are the same characteristics that make them highly threatened by pet trade, in addition to the increased rates of habitat degradation and deforestation in the Amazon. Locations where birdwatchers, naturalists, photographers, or any environmental enthusiast can admire these stunning creatures are not many, but in ‘collpas’ or clay licks in southeastern Peru several macaws’ species can display their beauty while feeding. The collpas are locations where animals consume soil, and there are various hypotheses that explain soil consumption such as: mineral supplementation, adsorption of dietary toxins, and mechanical aid to digestion, among others. 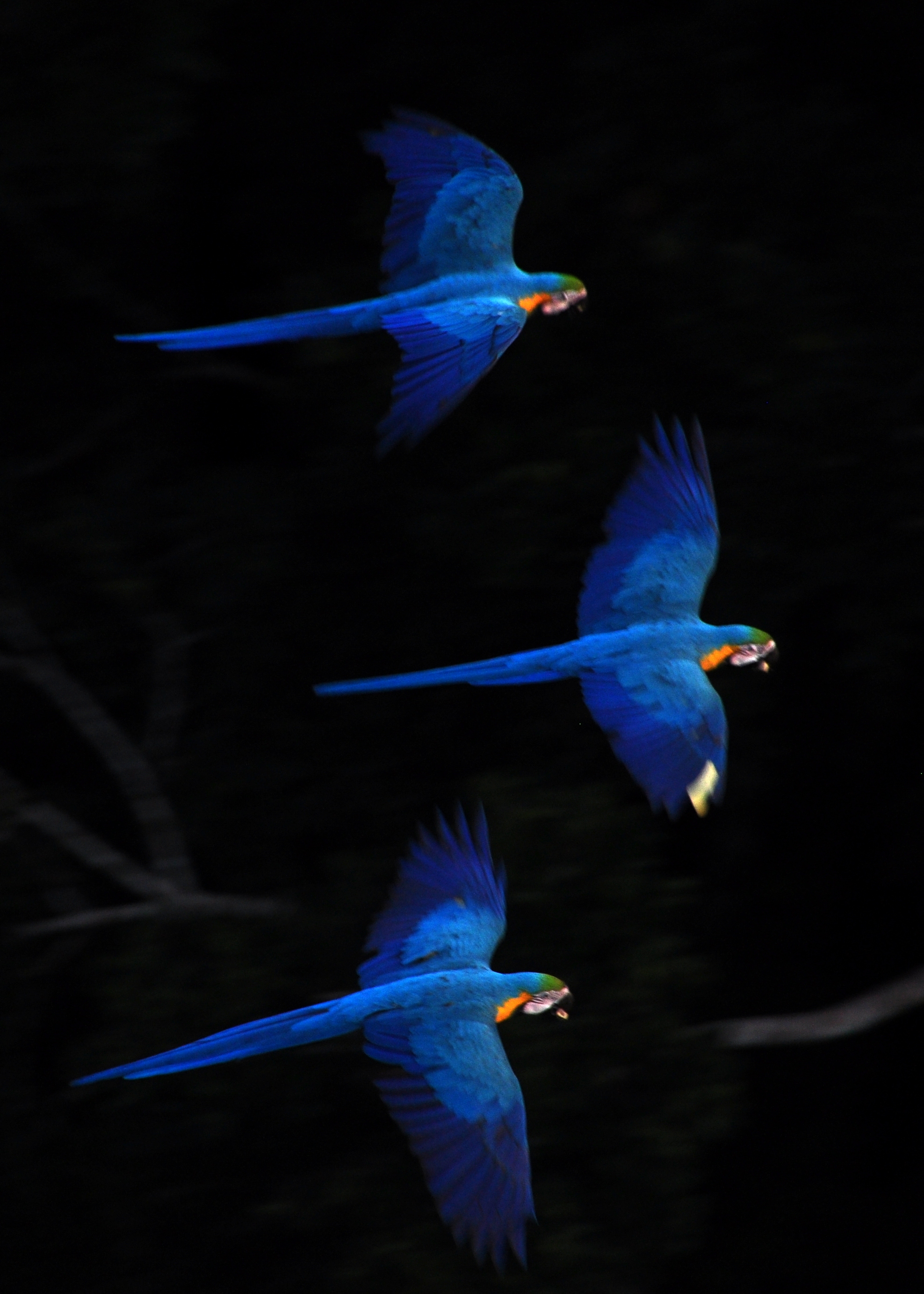 Blue-and-yellow (Ara ararauna) macaws, one of the seven species of macaws at Los Amigos, rather than being large frequenters of clay licks are highly associated with palm swamps. However, these brightly colored birds are not attracted to just palm swamp but with the Mauritia flexuosa palm, locally known as “aguajal.” Interestingly, palm fruit is not the main reason why blue-and-yellow macaws are closely tied to this plant, instead their nesting preferences is what makes these palm swamps so appealing. Mauritia flexuosa occurs in monospecific stands, growing in mostly swampy areas. The palm’s height reaches up to 30 m and 30-60 cm in diameter, only the female individuals produce around 500 fruits every season, which are consumed by a variety of animals –including macaws- and have a social and economic importance throughout the Peruvian Amazon. Unfortunately, current harvesting techniques of the “aguaje” are decimating their population, as the female palm is chopped down in order to obtain the edible fruits.

Like most large macaw species, A. ararauna has a low reproductive rate and their reproductive behavior may be affected by the lack of appropriate nesting sites in their natural environment. Blue-and-yellow macaws nest almost exclusively in hollow and dead M. flexuosa palms, at height of approximately 15 meters. After a palm dies, the leafed crowns dry and fall, and the palm heart -located in the trunk’s interior- starts dissecating leaving a hollow trunk with solid walls, creating an ideal nesting site for macaw’s eggs incubation and chicks survival. Certainly, macaws are highly meticulous when finding an appropriate nesting site. Besides finding a dead hollow palm, they have to be isolated from tall surrounding canopy and any other hanging vegetation. In addition, while inside the hollow trunk rotting palm fibers cover the nest floor. These palm characteristics of being a hollow and dead palm that is isolated from surrounding vegetation, is doubtless a good strategy to avoid predation from voracious raptors and arboreal organisms. 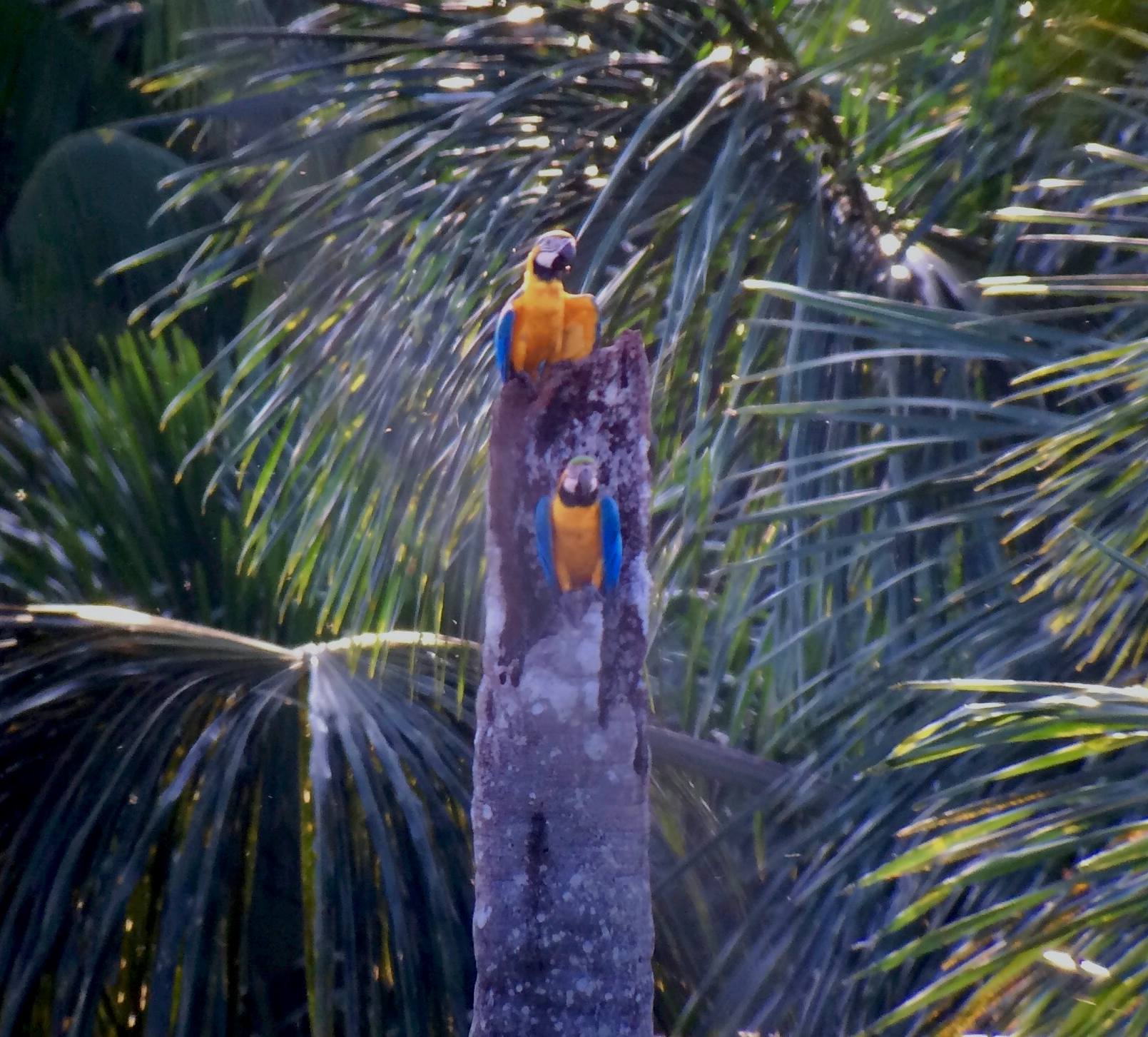 A study conducted in Madre de Dios analyzed the advantages of managing M. flexuosa palm swamps to protect the nesting ecology and population of blue-and-yellow macaws. This was done in a small section of a palm swamp by cutting the top of the palms and removing the understory vegetation. Although it might seem like a drastic management tool, the study reported that cut palms persisted from 4 to 7 years, and were occupied by macaws’ nest at a rate of 24%! From this data, authors suggested that cutting 5 palms annually will generate areas of ~20 dead palms that could be used by 6 or more pairs of macaws every year, thus increasing the reproductive success of blue-and-yellow macaws. This could also be used for ecotourism purposes. In fact, Los Amigos has M. flexuosa palm swamps where blue-and-yellow macaws thrive together with scarlet and red-and-green macaws! The protection of this habitat is vital for their survival, and reminds us how amazing and enchanting the Amazon rainforest is, and how connected every organism is with this immense forest.