A bird rarer than a Jaguar: An encounter with a Tiny Hawk

At the time of my encounter, I did not realize the rarity of the event. I was walking across an old channel of the Los Amigos River that is in its early successional stages. There are no tall trees, instead, there are many shrubs covered in vines. Bordering this channel are the towering trees of the floodplain forest, making this edge habitat an ideal location for a Tiny hawk (Accipiter superciliosus) (Global Raptor). I had just walked past a resting bluish-fronted jacamar (Galbula cyanescens) when my eye caught a glimpse of a bird careening through the vegetation. I followed the shadow through the vegetation and, in the clearing that the trail made behind me, watched a small flying raptor raise its feet forward and pin the bluish-fronted jacamar to its perch. 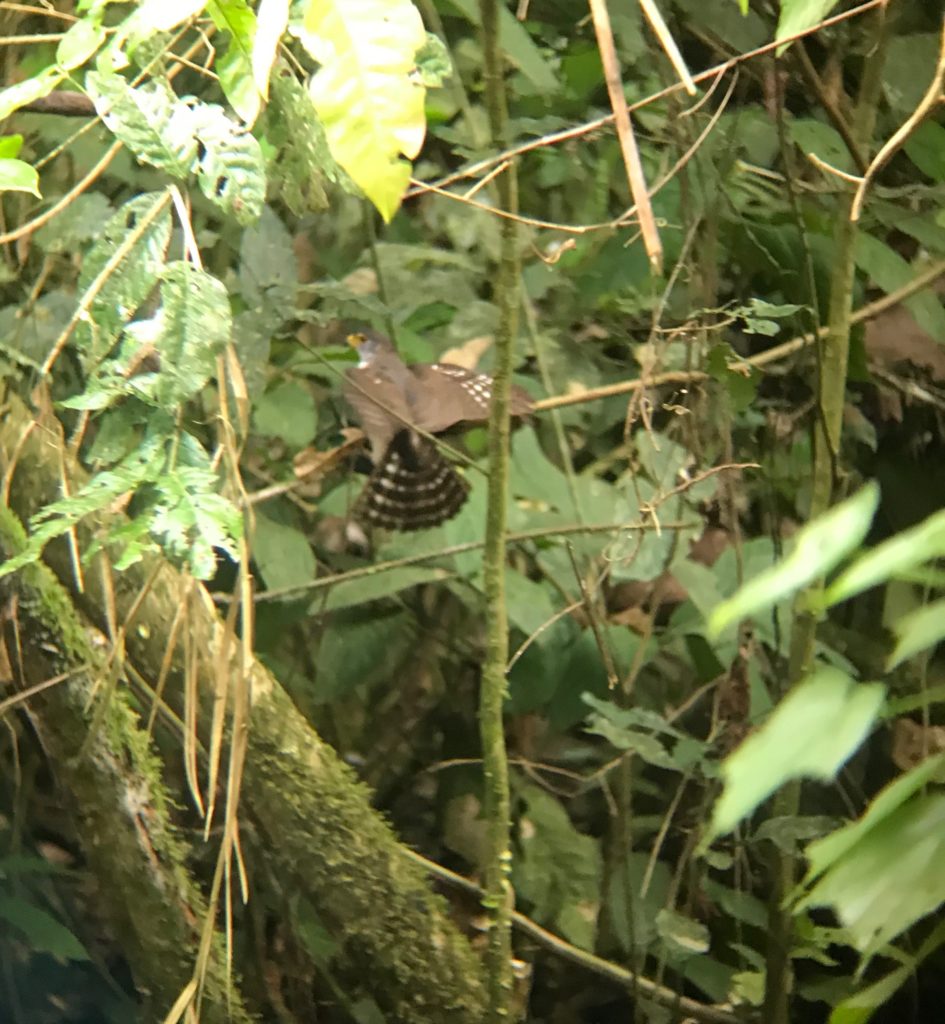 A photo taken through binoculars of the Tiny Hawk after pinning the jacamar to its perch. PC: Tom Matia

The small raptor (22-28cm/8-11in) is known to be a specialist at predating on avifauna and had the jacamar in its grip (Global Raptor). It seemed the attack would prove fatal as there was hardly a fight from the jacamar. The hawk soon took notice of my presence and, not wanting to disrupt its natural behavior and its success, I walked away from the scene. A few hours passed by the time I returned to investigate the scene; there was not a feather or scrap to be found. This could mean two things, the jacamar made it out the talons of the tiny hawk, however, due to the elongated nature of their talons, I choose to believe that the later, the jacamar left the scene in the grasp of the hawk.

When I returned to eat dinner, I learned that little is known about this species of raptor and that the sighting was very rare! Looking further into this species, I discovered that there is hardly any information on their populations. With the help of citizen science, specifically from eBird by Cornell University, I found that only 130 observations have been recorded in Peru over the past ten years. With such little documentation on this uncommon bird, it is alarming that they are estimated to lose 19-24% of suitable habitat in the next twenty-two years (BirdLife).

The Tiny hawk has an assumed population of 670-6,700 individuals and is currently listed as ‘least concern’ by the IUCN, and BirdLife, due to its expansive range (BirdLife). Hearing these statistics shocked me and I immediately searched population sizes of species that are rare to see. The jaguar (Panthera onca), an animal that is incredibly elusive, yet possibly more likely to be encountered, has roughly 15,000 individuals according to the WWF (Quigley). And so I thought, “a tiny hawk is not something you see every day”.

In this ongoing series, we describe major new projects that may lead to the rapid deforestation of large areas of primary Amazon forest.

The first report (MAAP #84) described the deforestation associated with the construction of the Yurimaguas – Jeberos road (see Base Map), which crosses extensive primary forest and a priority site for conservation in the Loreto region. 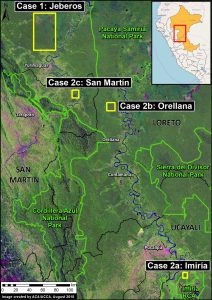 The current report describes the deforestation associated with major agricultural expansion in three areas in the northern Peruvian Amazon, referred to here as the “Imiria,” “Orellana“, and “San Martin” cases.

These three cases are important because they present characteristics of large-scale, agro-industrial activities (linear plots organized around an extensive new access road network).

In all three cases, early warning alerts (GLAD/Global Forest Watch) initially detected the deforestation in 2017 (see MAAP #69) and their subsequent expansion in 2018. The total deforestation documented to date in these three cases is 3,600 acres.