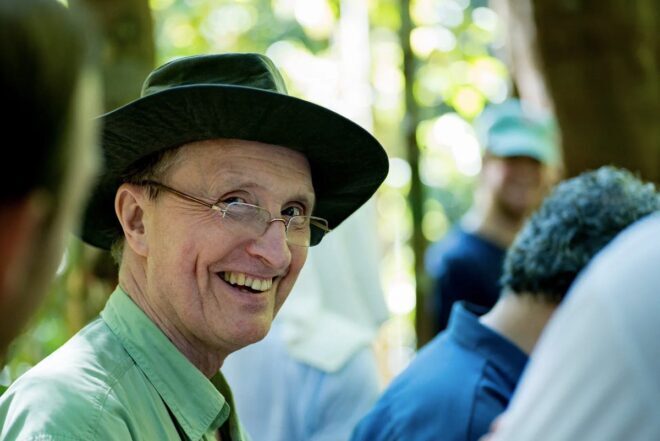 It is with heavy hearts that we lament the passing of renowned ecologist and long-time friend of Amazon Conservation Dr. Thomas Lovejoy this December 25. He was 80 years old.

Tom was a long-time advocate of conservation playing a prominent part in ensuring that the Amazon is a global priority for conservation since the 1970s. Among his numerous and profound contributions to the field, Tom coined the term “biological diversity”, helped develop the game-changing “debt-for-nature swap” model, and most recently, along with his colleague Carlos Nobre defined the Amazon’s tipping point. His many achievements have helped move conservation forward both in policy and on the ground.

Since 2009, Tom had been a member of Amazon Conservation’s Board of Directors, helping guide the strategic vision and direction of our organization.

Our Executive Director John Beavers, who worked closely with Tom as we developed and launched our 2020-2030 strategy, described him today as “such a dedicated, strategic, knowledgeable and faithful advocate of the Amazon and of biodiversity who enriched our understanding, improved our work, and provided the glimmers of hope that we needed to continue to advance our conservation efforts. It was such an honor to meet with him each time, knowing the many, many other people and institutions he was helping to advance the cause through his wealth of knowledge, experience, and caring.”

Our Founder Adrian Forsyth had many experiences with Tom in the rainforest, sharing that “Tom worked tirelessly until his last days. His accomplishments and awards were huge and many. Yet despite fame and frenetic schedule, he found time to help and listen to anyone who asked. Being kind was his natural state. Against the challenges of his mission, he smiled a lot. You could count on him after a grueling trip to come to your meeting in dapper, good spirits and to make an incisive observation or encouragement. With his passing, each of us, and indeed, our planet, has lost something, but far less than what we have gained from his exemplary life.“

Tom shared his love for the Amazon in an article on Yale News, describing what stepping foot on the Amazon felt like: “Before I got to the Amazon I was unable to truly anticipate what it would be like there. People imagine that in the tropical rainforest things are jumping out at you all the time, but in fact, it’s much more subtle than that. You’re dealing with hundreds of species of trees, and hundreds of shades of green. And it’s all a great blur when you first step into it. But then you begin to perceive the differences, and you begin to see the insect life. You hear a lot, and not just birds, but insects and amphibians and the like. Pretty quickly you do understand that this is one of the most diverse communities on Earth.”

In one of his last writings for the New York Times, Tom spoke on the links between climate change and the loss of biodiversity, and the importance of protecting intact forests: “We’re losing a battle we can win, but only by keeping trees on our side…. We must let the big forests stand.”

His legacy of championing nature will not be forgotten and we will carry on the fight to keep the Amazon standing in his honor. As he wisely said, “As long as something still exists in the world it can be saved.”

What do you wish for this holiday season? For Juliana Varga Sanchez, from the Beni region of the Bolivian Amazon, she hopes that deforestation doesn’t futher imperil the blue-throated macaw, an endangered species she cares for deeply. 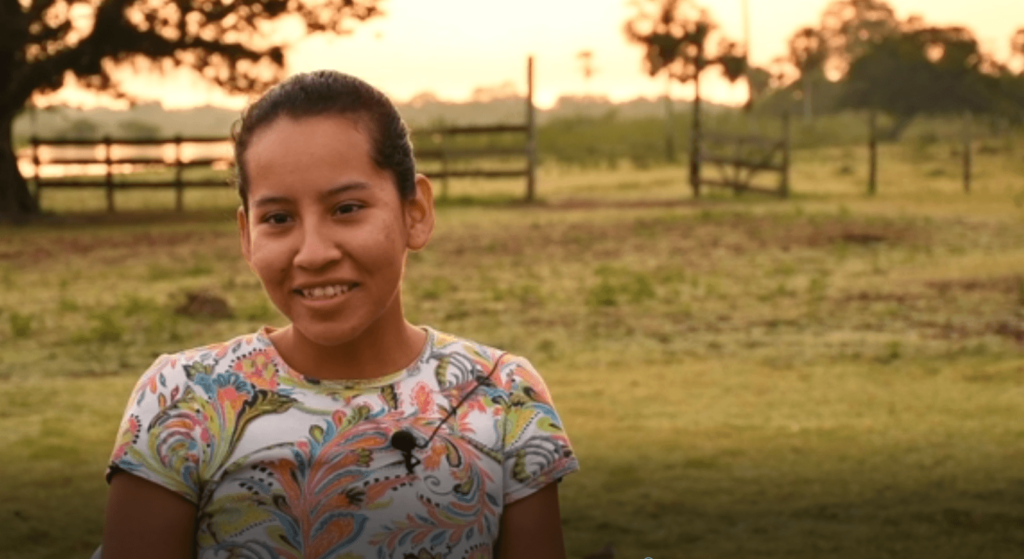 19-year-old Juliana Varga wants to follow in her dad’s footsteps to protect her forest home and the endangered blue-throated macaws within. You can help her do that. 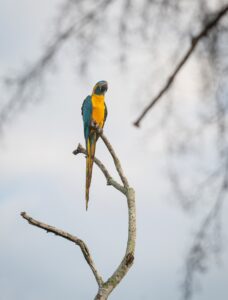 Since she was 7 years old, Juliana has been accompanying her father in patrolling their forest for illegal deforestation as part of a community patrol program. She also spends mornings and evenings from July to October supplying collected rainwater to drinking areas that blue-throated macaws can access during Bolivia’s harsh dry season, when water is scarce. “Blue-throated macaws are wonderful,” she describes, “When I fill the water, they’ll sit and watch me, and when I’m alone sometimes I’ll talk to them…I feel content to help in this way.”

Now 19, Juliana continues to patrol forests with her dad and hopes that people will come to value and protect the nature that sustains them. “Learn about nature,” she encourages. “The importance that it has and the importance of the animales within, so there isn’t as much extinction.”

With the same hope in mind, Amazon Conservation works with indigenous-managed territories across the region, such as the Amarakaeri Communal Reserve in Peru and the Waorani territory in Ecuador, to provide them with the technology, resources, and training to better monitor and protect their lands and forest resources.

This holiday season, you can help young environmentalists like Juliana Varga Sanchez protect their forest homes and the important animal species within. Additionally, thanks to the generosity of a longtime supporter, every donation that we receive by December 31st will be matched up to $150,000.

Can we count on your support to double your impact for the Amazon?

Dear Friend of the Amazon, 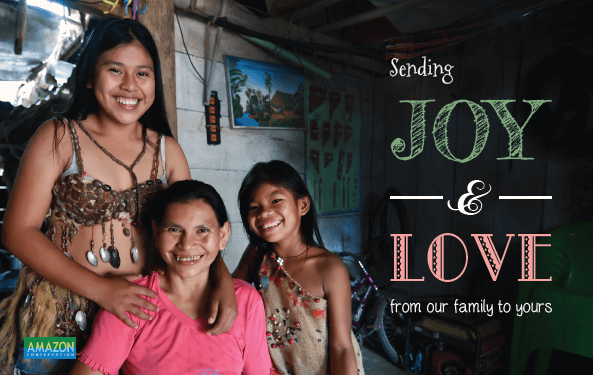 Blanca Pedraza, her daughter, and her niece (shown right) are all part of the Toromonas indigenous community, located deep in the forests of the northwestern Bolivian Amazon. Like many in her community, Blanca’s family depends on the harvest of organic forest products – like Brazil nuts and açaí berries – to survive. Brazil nuts are a flagship product in this part of the Amazon and vital for local economies and forest conservation. That is because when communities harvest these forest products that cannot grow in a monoculture, they protect the forests from being used for destructive purposes – like cattle ranching and unsustainable agriculture.

With your support, we’ve partnered with the Toromonas to make their harvest even more fruitful. As part of our efforts to enhance the management of Brazil nut trees, we’re helping the Toromonas women’s club transform raw Brazil nuts into organic products that can be sold for a higher price. The club, which Blanca is a member of, is focusing on producing Brazil nut oil, a delicacy in high demand by the country’s growing gastronomy scene. Helping local businesses like theirs grow strong while keeping forests standing is one of the many ways you are helping us achieve a thriving Amazon.

This holiday season we are especially grateful for your kind support in keeping conservation moving forward and for helping Blanca and families like hers on the front lines of forest conservation. Thank you for spreading joy this season, and happy holidays to you and your family!

Your friends at Amazon Conservation

Do you want to support families and initiatives that protect the Amazon? For a limited time, now until December 31, any gift you give to our innovative conservation programs will be MATCHED. That’s right, for every tax-deductible dollar you contribute, $2 will go towards the conservation of the Amazon rainforest and headwaters. Click here to make a difference today.