MAAP #89: Impacts Of Mining Project “Mirador” In The Ecuadorian Amazon

The Ecuadorian Amazon is experiencing a growing number of conflicts directly related to oil and mining extraction projects.

Here, we focus on the “Mirador” mining project, an open pit copper mine in the Cordillera del Cóndor, a mountain range along the Ecuador/Peru border that hosts a high level of endemism.

Deforestation Hotspots in the Ecuadorian Amazon

We then zoom in and focus on a dynamic area in the north that is located between three important protected areas (Sumaco, Yasuní y Cuyabeno).

We show a series of satellite images that indicate that the primary deforestation drivers (causes) in these hotspots are oil palm and other agricultural activities.

In 2018, four exceptional students and/or professionals were chosen as our Franzen Fellows.  Jointly, their passion for birds has led them to pursue work in the Amazon rainforest in order to protect this great frontier.  Currently, the Los Amigos Bird Observatory (LABO) is hosting two of its fellows, Alex Wiebe and Will Sweet.  In this post we will become acquainted with the work that these two are doing and their achievements along the way.

Will Sweet arrived to LABO on May 17th, 2018, and got right to work.  He is examining how different stages of succession around oxbow lakes impact the avifauna communities in the Los Amigos Conservation Concession. To avoid waiting for succession to unfold in real-time, Sweet has set up an observation pattern around three oxbow lakes that are already in different successional phases, from relatively new to almost totally grown over. He conducts point counts along these lakes to assess which birds inhabit which successional level.  In his pursuit, Will strives to understand the contribution of oxbow lakes to the Amazon basins’ high bird diversity, furthering our knowledge of changing landscapes’ effect on avian diversity. Will aims to attend a graduate program next fall while continuing to pursue his passion for birds. 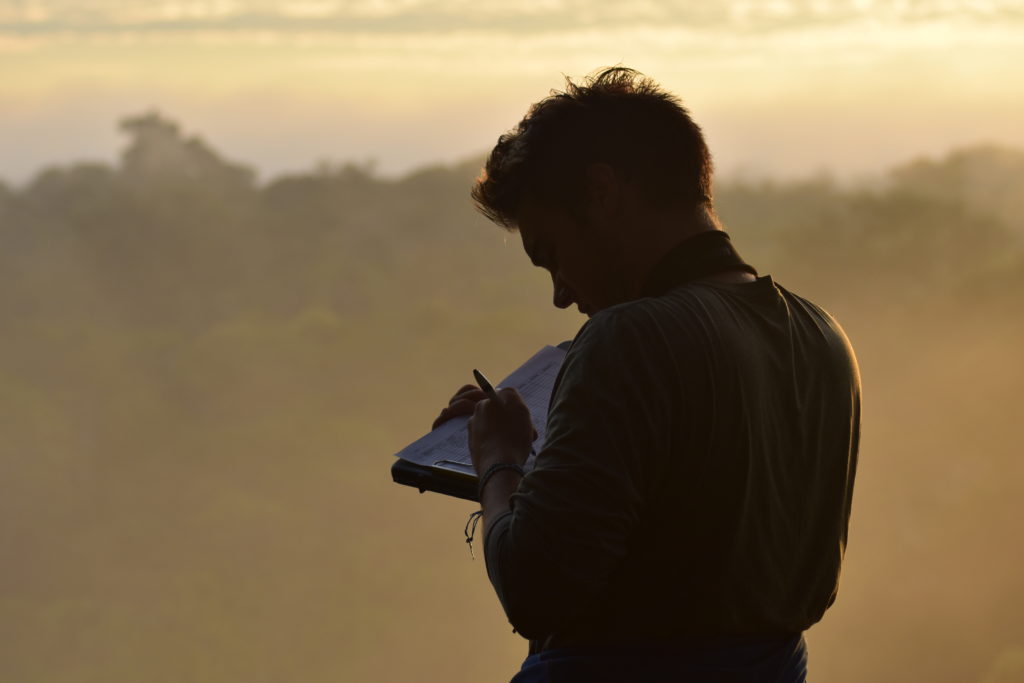 Finishing his last year of undergraduate studies at Cornell University, Alex Wiebe is spending his summer collecting data on one of the least understood family of birds: tinamous. They are secretive and skittish, which makes them difficult study subjects. Wiebe’s interest in patterns of avian geographic distribution in the Amazon, as well as the factors that affect their distributions, has led him to Los Amigos.  Tinamous are a natural choice for Wiebe’s work. They reach their highest density in the area around Los Amigos with 11 out of the 47 species represented, and since little is known about them, his work stands to have impact. Wiebe will be using his background in statistics to create a spatial distribution model of the tinamous of LABO and across South America. In order to collect his data, Wiebe conducts point counts in a variety of terrestrial habitats, while also recording the locations of rare species as they are heard.  With his results he will build a better understanding of this enigmatic family of birds.

Alex and Will have had an incredible summer thus far and have reached numerous achievements along the way.  Recently, Alex broke the world record for an on-foot Big Day with 347 species. A Big Day is a competitive birding ‘race,’ in which the contestant attempts to see or hear as many different bird species as they can in one 24-hour period. And Will was able to identify a species that is new to LABO: the rusty-margined flycatcher. The work that is being completed by these two fellows will undoubtedly help conserve the Amazon rainforest and the avian species that call it home.

Normally when you go out looking for birds, you look for the most colorful ones, or listen for those with the most beautiful songs. We often forget that cryptic birds have a beauty of their own. Vultures are not terribly eye-catching but they serve an important role in the ecosystem as the clean-up crew.

Vultures are scavengers, which means they eat dead meat. They are more efficient at finding carrion compared to other scavengers. You can see them soaring all around in their search for food. Their soaring behavior takes advantage of thermals, air currents warmed by the sun that allows them to reach great altitudes without beating their wings. Once they have found their meal, their extremely acidic stomach destroys any bacteria or viruses established in the carrion. This prevents diseases from proliferating and spreading to other animals and humans. Don’t think that because they are the ecosystem cleaners they are dirty birds; on the contrary, their featherless heads are an adaptation to stay clean while eating. 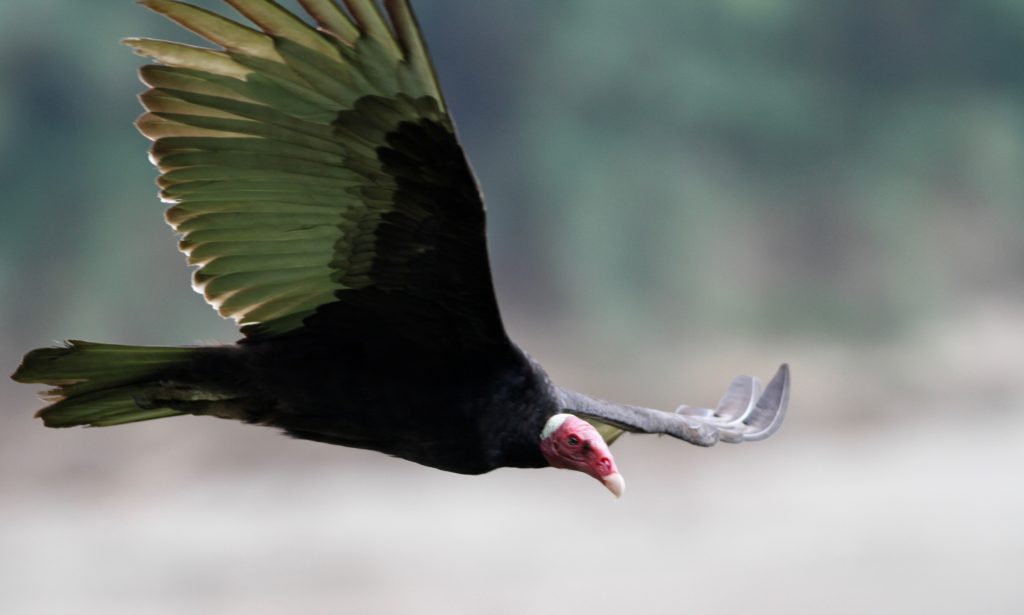 Although the many species of vultures all over the world serve the same role and have similar appearances, they are divided into two unrelated guilds: The Old World Vultures (Accipitridae) and The New World Vultures (Cathartidae). Los Amigos is home to four of the seven species in the Cathartidae family. The Black Vulture (Coragyps atratus), Turkey Vulture (Cathartes aura) and King Vulture (Sarcoramphus papa) are widely distributed in tropical forests, open savannahs, and grassland, while the Greater Yellow-headed Vulture (Cathartes melambrotus) is restricted to tropical forests. These four species are often seen interacting during lunchtime.

Due to their highly developed olfactory sense, finding carrion is easy for the Turkey and Greater Yellow-headed vultures. They can find their meal as early as an hour after it has been disposed. You may think that this gives them an enormous advantage over our other vulture residents, but the King and Black Vulture have found a way of benefiting from their neighbors’ awesome sense of smell. Since they themselves cannot track carcasses through their smell, they rely on reaching altitudes of 100 feet or more to be able to follow the Turkey and the Greater Yellow-headed vultures to the food source. This behavior is especially apparent in undisturbed forests where the latter is solely responsible for locating carrion and serving as a guide for the other species. This could be due to an even more developed sense of smell than the Turkey vulture or because its wing structure allows them to maneuver better over the tree canopy. 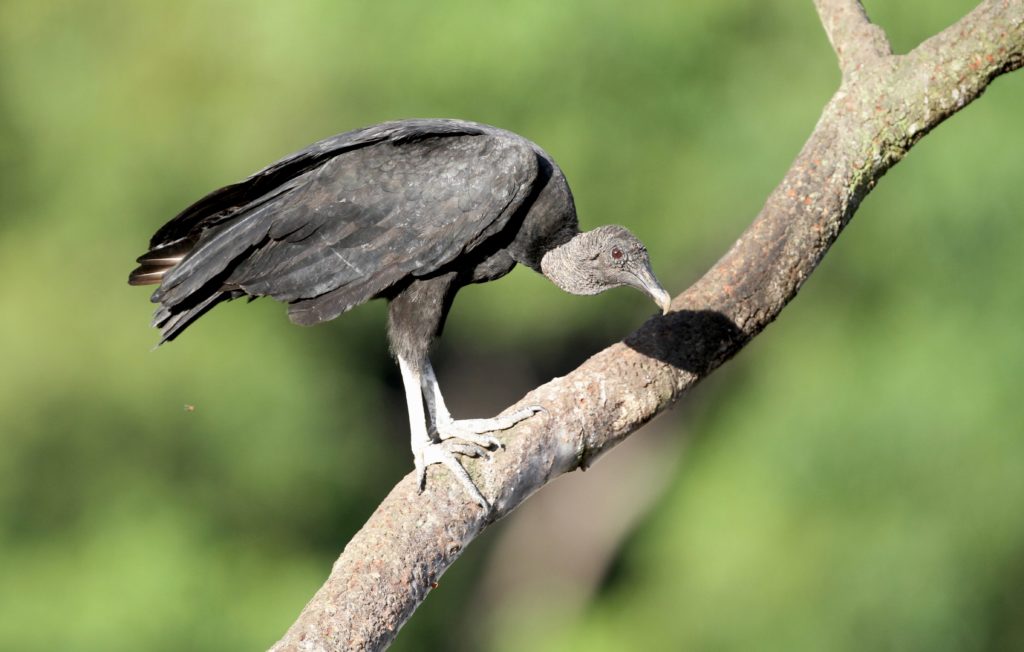 The Black Vulture (Coragyps atratus) waiting for its neighbors to find the meal. | Photo by Alex Wiebe

But what happens when all these species come together for lunchtime? Although a dominance hierarchy between species does exist, most of the time there is not a direct aggression between them. The interaction could result in different species feeding at the same time from the same resource or in individuals leaving when a more dominant species is approaching. More intense aggression has been identified between individuals of the same species. Furthermore, the differences between species in size and bill length and the postures they adopt while eating could be a factor allowing the presence of more than one species at a time. These differences enable them to forage from different tissues of the carcass simultaneously, which may reduce direct competition.

Close to Los Amigos, the main threats that vultures seem to face are the misperception of people. People believe they attack their cattle ranch or that they are dirty birds. But as described here, they feed on dead meat and they even prevent diseases from spreading. Despite their unattractive appearances, vultures are interesting and important birds in our ecosystem. Here at Los Amigos we are excited to have this array of species taking care of the health of our forest. 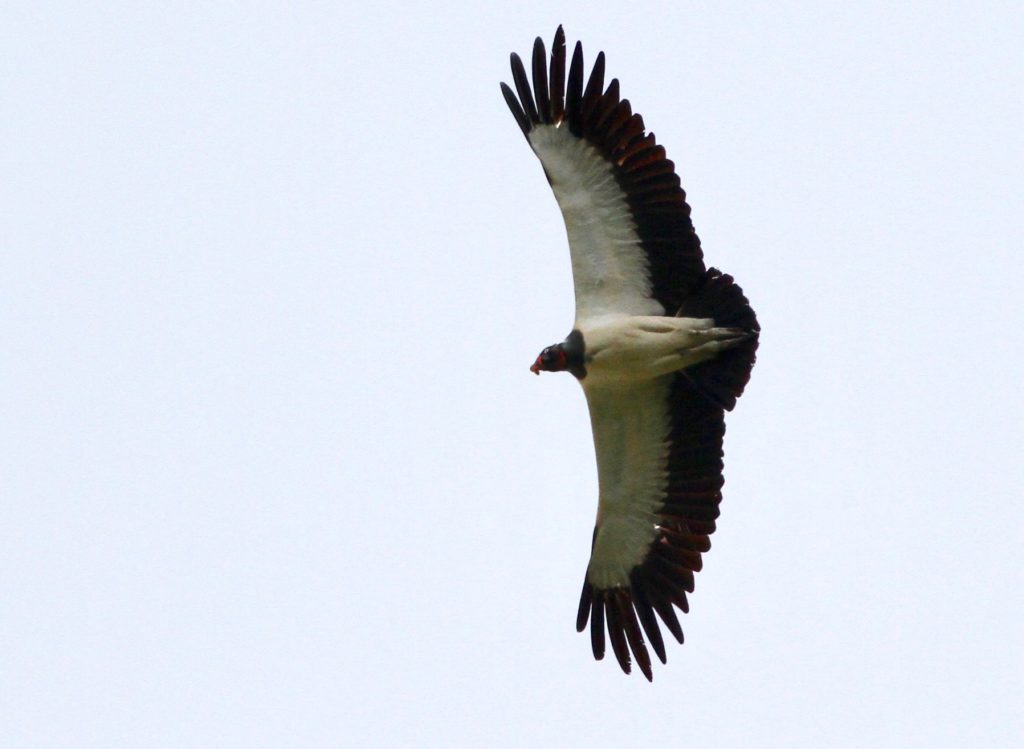 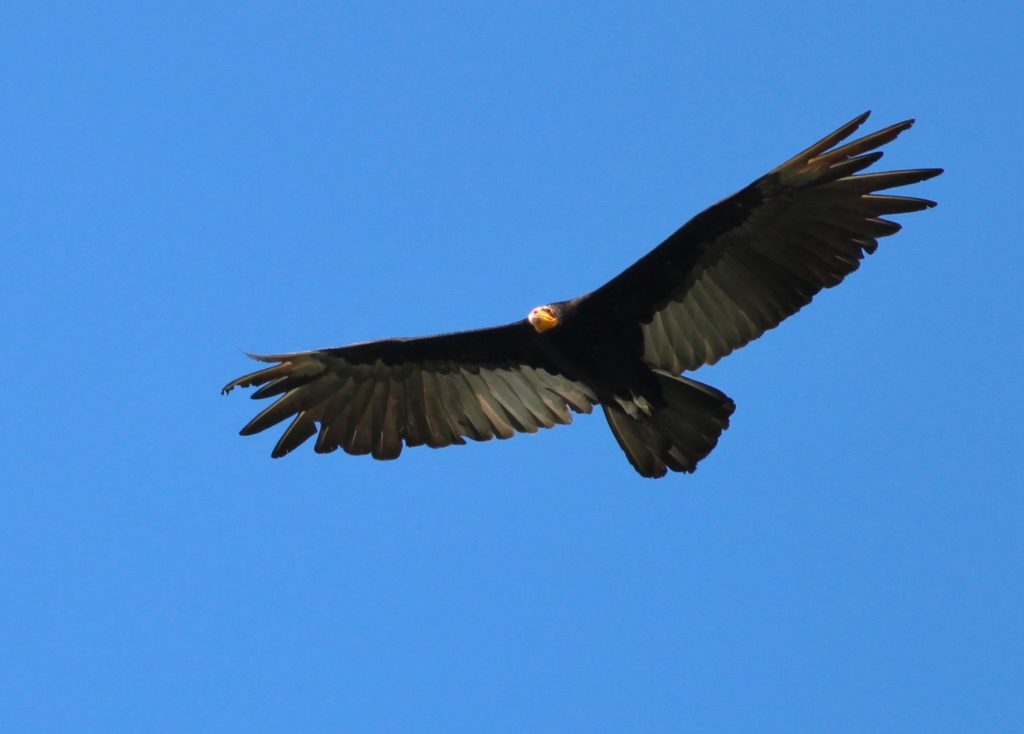 If you see the King Vulture (Sarcoramphus papa) and Greater Yellow-headed Vulture (Cathartes melambrotus) from far, you can tell them apart based on the color of their breast plumage. | Photos by Alex Wiebe 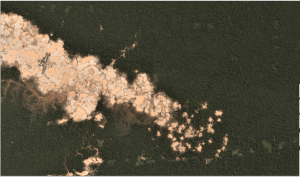 We have reported extensively on the ongoing gold mining deforestation crisis in the southern Peruvian Amazon (see Archive), estimating the loss of over 17,500 acres in the five years between 2013 and 2017.

Here, we present new analysis showing that the destruction continues in 2018: we estimate an additional 4,265 acres during the first six months (January – June). This most recent deforestation is concentrated in two critical areas: La Pampa and Alto Malinowski. Most, if not all, of the mining appears to be illegal (see Annex).

This brings the total gold mining deforestation since 2013 to over 21,750 acres.

Next, we show a series of satellite images of the recent deforestation in La Pampa and Alto Malinowski.

The Base Map highlights the most recent (2018) gold mining deforestation in red. We estimate this deforestation to be around 4,265 acres in the two most critical zones: La Pampa and Alto Malinowski. The yellow boxes indicate the location of the zooms described below. At the end of the article, in the Annex, we present the same base map but with all the overlapping land designations as well to illustrate the complexity of the situation. 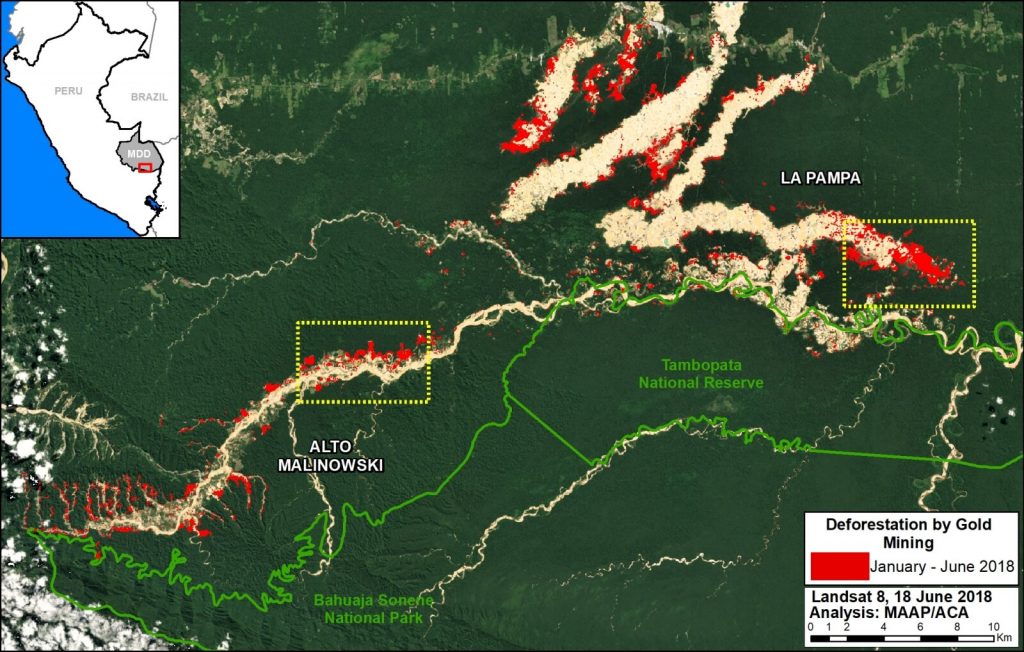 The following images show the gold mining deforestation in the area known as “La Pampa” between January (left panel) and May (right panel) 2018. Note that the second image is in slider format. 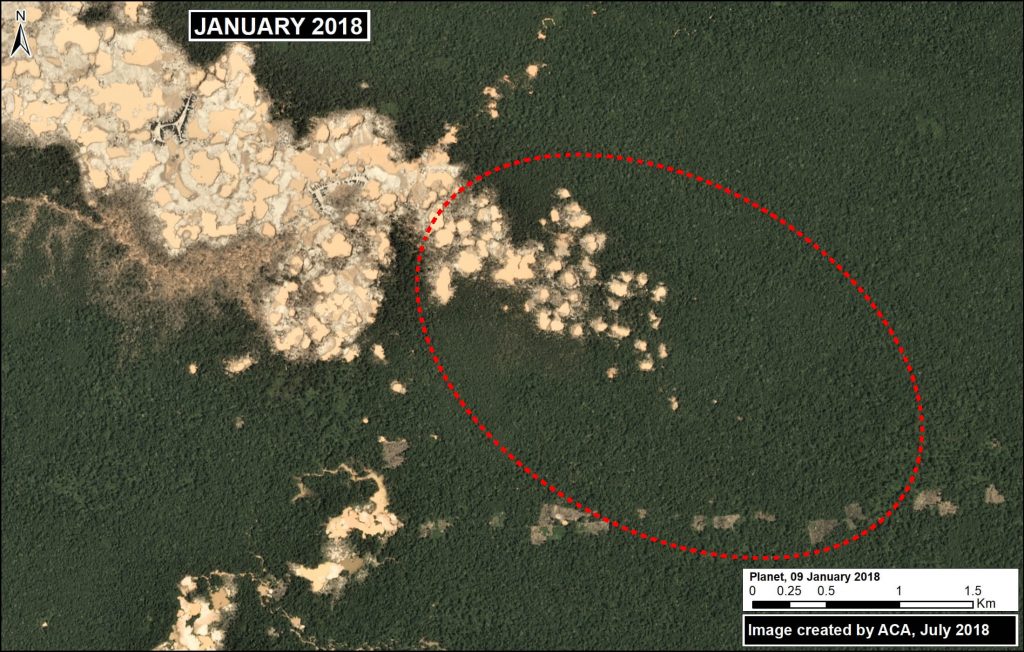 The following images show the gold mining deforestation in the area known as “Alto Malinowski” between January (left panel) and May (right panel) 2018. Note that the second image is in slider format. 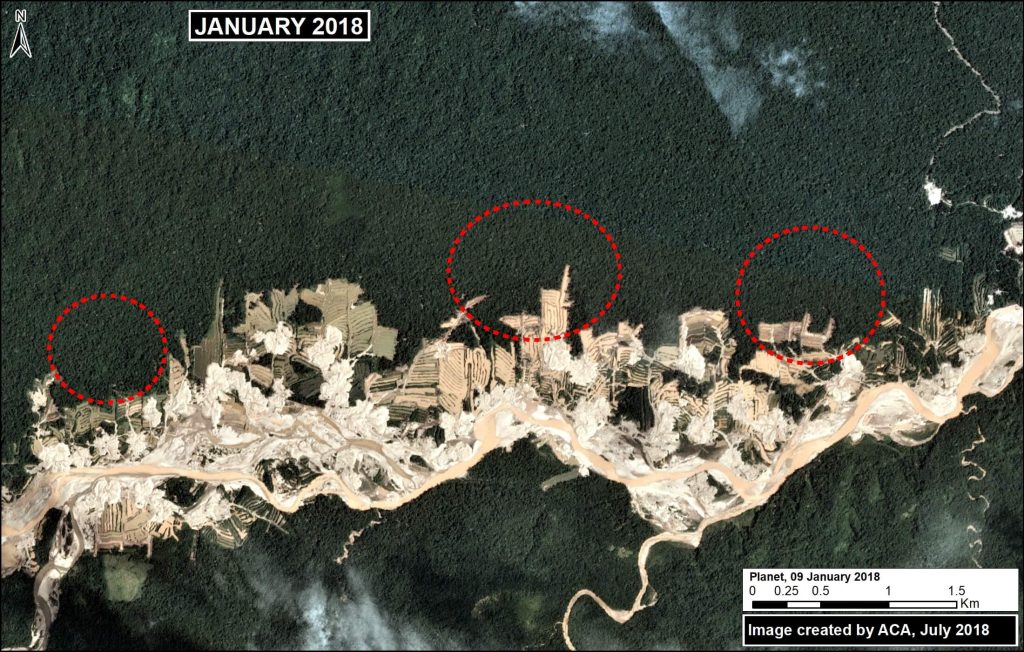 We present the same base map as above, but also with relevant land designations.  Note that much of the deforestation is concentrated in forestry concessions (ironically, in “reforestation” concessions) and in the Kotsimba Native Community, both of which are outside the legal mining corridor and within the buffer zones of Tambopata National Reserve and Bahuaja Sonene National Park. Thus, most, if not all, of the mining activity appears to be illegal. 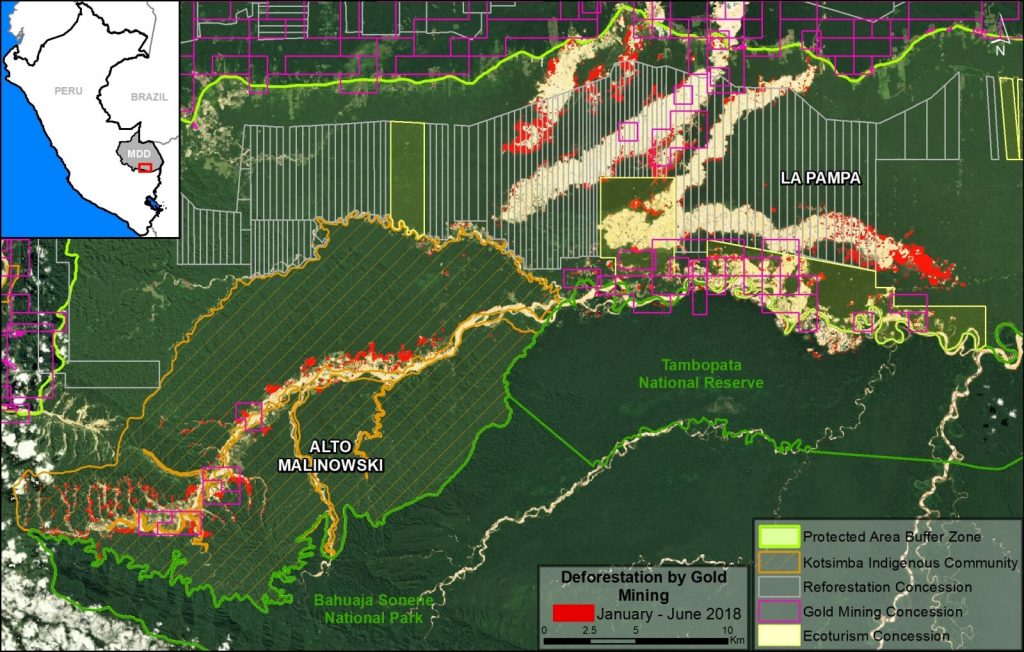