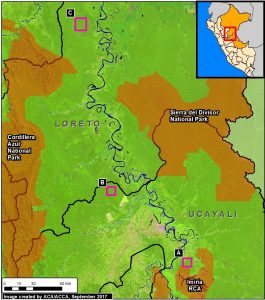 They appear to be related to medium or large-scale agricultural activities due to their distinct characteristics: straight access paths extending from secondary roads built deep into primary forest, and deforestation of rectangular/square plots.

These patterns are significant because they are very different than the usual patterns observed with small-scale agriculture in the Peruvian Amazon: scattered plots with no major linear features.

Here, we show satellite images of 3 areas in the central Peruvian Amazon (see Base Map) that have recently experienced these alarming patterns, and deserve urgent attention due to the threat of rapid deforestation of large swaths of primary forest.* 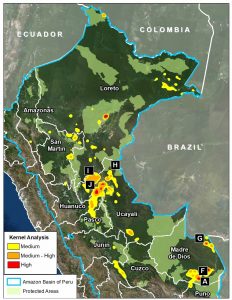 In a previous report, MAAP #65, we presented information about deforestation hotspots in 2017 in the Peruvian Amazon, based on early warning alert data from January until mid-July.

Between July and August, the amount of alerts greatly increased, likely due to arrival of the dry season. Thus, this report includes new updated data until mid-August.*

Below, we present satellite imagery of the following hotspots:

**The data were generated by the National Program of Forest Conservation for Climate Change Mitigation, Peruvian Ministry of Environment (PNCB/MINAM).

***We emphasize that our calculations are just estimates. Official forest loss data are produced annually by the Peruvian Ministry of Environment.