Protecting Over 650,000 Acres of Forests in Bolivia 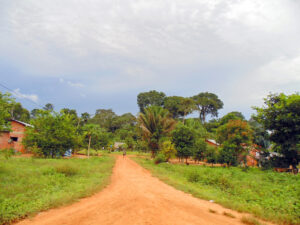 By working closely with local communities and governments, we helped establish four new protected areas in 2020. Two areas in Bolivia and two in Peru together safeguard over 650,000 acres of irreplaceable wild places.

In Bolivia, we supported the establishment of the Puerto Rico and Porvenir conservation areas – protecting 513,000 and 78,000 acres respectively – by providing the legal and technical support needed by local communities and municipal governments to officially declare these areas.

Declaration of this vast swath of forest helps connect three important conservation areas in Bolivia – Manuripi-Heath National Reserve, Multiethnic Indigenous Territory (TIM II), and the Santa Rosa del Abuná conservation area, which we helped establish in 2017. With the addition of the new Puerto Rico conservation area, this biodiversity corridor now covers nearly 1.5 million acres. This region includes the territories of 20 native communities, many of them members of the Tacana indigenous people who rely on the forests for their livelihoods. Iconic species that benefit from the creation of this massive biological corridor include the giant armadillo, giant anteater, jaguar, crested eagle, the endangered Goeldi’s monkey, and the South American tapir. 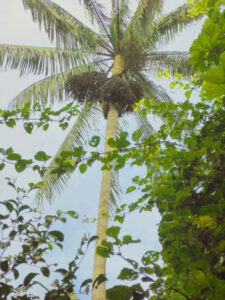 This new protected area will ensure the health of these very productive forests with the development of a long-term plan to help communities sustainably manage their natural resources, primarily Brazil nuts and açaí berries. The area is home to hundreds of families, more than 1,000 species of plants, and more than 800 species of vertebrates. Its proximity to the region’s urban center, Cobija, combined with its beauty and biological diversity, provides great ecotourism potential.

To be able to establish these areas during the global pandemic, we had to adapt our approach – relying more heavily on our GIS and remote sensing technology to produce the ecological information the government required to declare these areas. We also stepped up to help communities get access to and participate in online meetings so that their voices could be heard throughout the process.

All in all, these types of large-scale conservation achievements are crucial for keeping the Amazon from reaching its tipping point. By supporting a sustainable forest-based economy and creating the network of interconnected protected areas needed to maintain climate resilience, healthy habitats for species, and functional ecosystems that provide the goods and services vital for our survival, we can achieve a thriving Amazon.

This story was featured in our 2020 Impact Report. Click here to read about other conservation successes from 2020. 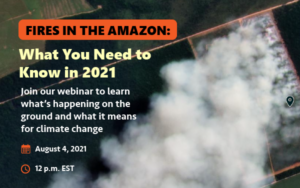 On August 4, attendees at our webinar Fires in the Amazon: What You Need to Know in 2021 learned what to expect during this year’s intense fire season and the implications for climate change, indigenous peoples, and protected areas.

Real-time monitoring experts, scientists, and local organizations witnessing the impact of the Amazonian fires shared their insights through a series of short informational presentations over three distinct sections:

During the first section, The Findings, attendees learned about the fires in the Amazon, the patterns we’ve identified, and the drivers behind them. 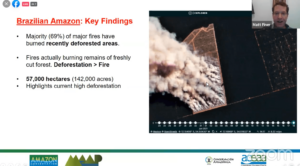 Amazon Conservation’s Director of MAAP Matt Finer started off this section, presenting “What We Know About the First Fires in the Amazon in 2021.” He explained that because most fire detection systems are based on heat and temperature anomalies, it tends to show thousands of red dots indicating fires everywhere. “Our app filters through these hundred and thousands of red dots and fires and really just distinguishes those that are burning lots of biomass.”

He also warned that, “With the current indications, this season may be intense more than last season, and at the end of 2020 we documented over 2,000 major fires.” One reason behind this is that the fires season this year started one week earlier than last year, along with record high levels of deforestation. Lastly, Matt Finer highlighted the very strong link between deforestation and fires, “Of these fires in the Brazilian Amazon, the vast majority are burning recently deforested areas; 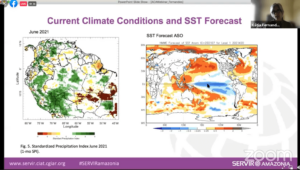 the fires are actually burning the remains of freshly cut forests. There’s a very tight link between deforestation and fires.”

Climate Scientist Kátia Fernandes, who works at the University of Arkansas and SERVIR-Amazonía, followed with “Expectations for the Rest of the Fire Season and Climate Change Implications.” She explained various graphs showing the temperature of the Atlantic ocean, the sea surface temperature forecast for the upcoming months, and how this affects weather patterns and the Amazon. She says that “In Brazil we see the season has started…the conditions at the beginning of the fire season are very dry in Mato Grosso.” 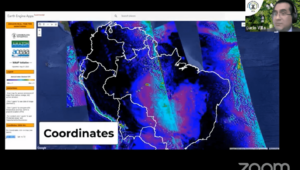 The next section revealed the technology to use to detect the fires, with demonstrations on how to use them that can be replicated at home by any user interested.

Lucio Villa, GIS and Remote Sensing Specialist at our sister organization Conservación Amazónica – ACCA in Peru, gave an overview of our novel Fire Tracker App. He explained that the app works through satellite information and demonstrated how to use it, switching through each of the layers panels. One aspect of the app that he highlighted was being able to actually see the coordinates of the fires. “By making a small click on the screen we can obtain the coordinates in the lower left part with good precision. Then you can put the coordinates in another source of information to reference it.” This system of checking the coordinates and referencing them with an outside source (for us, it is Planet satellite imagery) is how we are able to tra 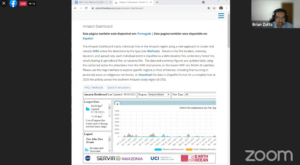 ck fires in the Amazon daily.

Brian Zutta, from the NASA Applied Science Team then demonstrated how to use the new Amazon Dashboard, which tracks individual fires in the Amazon region using a new approach to cluster and classify active fire detections by type. Based on the fire location, intensity, duration, and spread rate, each individual event is classified as a deforestation fire, understory forest fire, small clearing & agricultural fire, or savanna fire.  Users can use the map to explore specific regions or fires of interest, including fires burning in protected areas or indigenous territories, or download the data in shapefile format for a complete look at 2020 fire activity across the southern Amazon study region. He noted that, “The objective is to be able to look at policy and prevention, and understand what’s occurring in real time.”

What It All Means 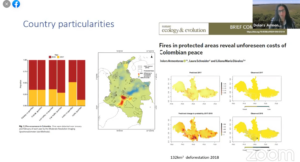 The last section synthesized what we learned from the findings and the technology behind them into what it all means.

Dolors Armenteras, from the Universidad Nacional de Colombia presented “Fighting Fires in the Amazon: What Can Be Done”. “With the technology available to us, we have a greater ability to show exactly what’s happening and to predict it,” she explained. She also noted that it is important to discuss the drivers of deforestation and fires, referencing in particular the increased demand of agricultural products. Additionally, the importance of maintaining open communication with local communities and stakeholders was not understated. “We have to come to a solution recognize the rights of indigenous communities and also train communities and people in sustainable activities…We need sustainable infrastructure.” 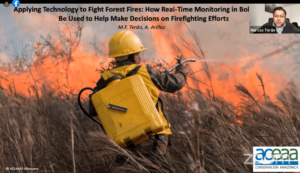 Marcos Terán, Executive Director at our sister organization Conservación Amazónica – ACEAA, concluded with his presentation “Applying Technology to Fight Forest Fires: How Real-Time Monitoring in Bolivia Can Be Used to Help Make Decisions on Firefighting Efforts.”  He noted that in the Bolivian region of Pando, there are a number of fires . “What do we do within this context?” he asks. “We need to integrate several tools to be able to have more strategies in the region.”  He explained that the majority of tools to monitor the fires are using the “hotspots” as an alert system. There are different systems to show the fires, and some have made a lot of progress to isolate the temperature variations to identify the major fires with the hotspots. “As Lucio said, this helps us identify major fires within the region. But we also have the problem that not all hotspots turn into fires and not all fires can be detected with this kind of tool…but we can use the tools and images we have.” When referencing the fire with the use of land they then can identify if it is legal or not, and refer this information to local authorities that can take action. Marcos also took time to thank those for their efforts in detecting and stopping the Amazon fires, saying “I’d also like to thank all those who are involved in fighting fires. Those who work in an office with satellites giving information, but also those who are involved in the fight on the ground.

In conclusion the webinar was an overall success, with attendees from all around the world learning about the implications of this year’s intense fire season, the technology behind the detection of the fires, what it all means, and how we can help.

Click here to view the full recording of the webinar (no translations, original audio available only), and here to download the presentations.

Attend our free, one-hour webinar to learn about what to expect for this year’s fire season in the Amazon and its implications for climate change, indigenous peoples, and protected areas, straight from real-time monitoring experts, scientists, and local organizations witnessing the impact of these growing fires. Simultaneous translation will be available in English, Spanish, and Portuguese. Click here to see the full agenda (in English). 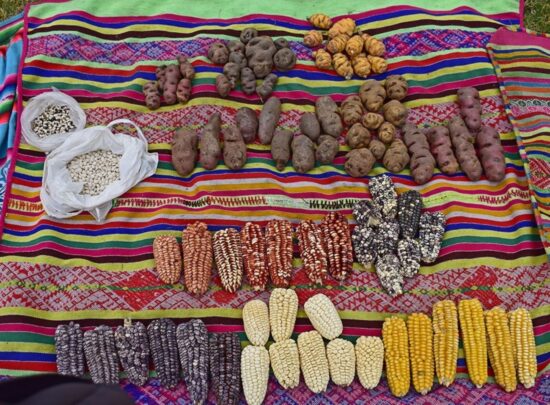 The Ccollasuyo Agrobiodiversity Zone supports indigenous communities in the Cusco region, and focuses on rescuing ancient agricultural practices capable of growing a wide variety of native crops sustainably. One of the first of its kind in the country, this area conserves over 35,000 acres of forest and the unique species that inhabit it.

Located in the Peruvian province of Quispicanchi, this area is home to a hundred indigenous Quechua families who cultivate more than 100 varieties of native potatoes, 12 types of native corn, and unique root vegetables such as oca, mashua, olluco, quinoa, kiwicha and tarwi. For generations, the families of Ccollasuyo have continued to apply their ancient practices to grow these plants that are important markers of the world’s agricultural genetic diversity.

Complementing the conservation of this region, we also helped a neighboring Quechua community, Marcapata Ccollana, establish a conservation area protecting an additional 50,000 acres. Combined, these agrobiodiversity zones and conservation areas help mitigate the effects of climate change in a unique way by promoting and preserving ancestral forest-friendly and climate-resilient farming practices.