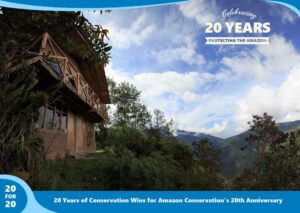 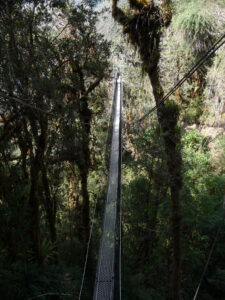 During the low tourist season of

When I first arrived to work at Wayqecha in July 2009, I was struck by how relatively dry this cloud forest was. The forest itself was green, but the transition between the upper cloud forest and the puna grassland was dry as a bone. In September I kept hearing from my co-workers the promise of rain. Well, we waited … September and October passed and we worried that the rains wouldn’t come. Finally, in November we had abundant rain, and the change in the cloud forest and puna was amazing. Many plants produce their fruit at this time of year in greater abundance than during the austral winter, attracting many animals.

On my rounds of the trails, forest, and puna, and through the reports of researchers working at the station, I noticed an increase in the presence of animals, sighting them and finding their tracks more often. We sighted a resident fox several times and even saw a long-tailed weasel right at the door of the station. Birds, the most visible of animals at the station and always relatively abundant, seemed to explode with new varieties during this period. There was a noticeable change in the demographic of the hummingbird population.

Aside from the boreal migrants that come at this time of year, many more local birds come to feed on the newly abundant fruits, shoots, and insects. Of insects, butterflies in particular appear in new shapes and colors – for example, the spectacular Morpho sulkowskyi makes its first appearance. Of course the butterflies are preceded by an abundance of caterpillars, some so large and

full of bristles as to strike fear into the heart of the most experienced biologist lest he put his hand on one accidentally. And of course the myriad orchids in Wayqecha begin to bloom more abundantly at this time of year.

Everything seems to take on new life with the change in seasons and coming of the rains. Unfortunately this change and contrast is something that few visitors and researchers at the station get to experience. In contrast to the animals, most people flock here during the dry season of May through August. However, the few researchers who do brave the constant drizzle, cloudy weather, risk of landslides and falls along slippery trails, are rewarded by witnessing this greening of Wayqecha.

ACA has been working hard to ensure that students living near Manu National Park learn how to protect the majestic cloud forest in their back yard. The cloud forests where the eastern slopes of the Andes meet the Amazonian lowlands constitute one of the world’s greatest conservation priorities, and with the support of the Sea World & Busch Gardens Conservation Fund, we’re doing our best to protect this area.

Through this project, we have created an interpretive trail at our Wayqecha Cloud Forest Research Center and have already organized 6 school field trips for 124 students to the Research Center. Since demand is so high for these field trips, ACA organized a drawing competition on the theme of “Protecting and valuing our natural and cultural environment.”

Over 300 students submitted drawings and the winning classrooms from each school will be participating in the first field trips to Wayqecha in 2009.

In addition, ACA has led two workshops about how to include environmental themes in the school curriculumfor 97 teachers from Paucartambo and Kcosñipata. Many of these teachers have now committed to lead an environmental service project with their students. We are seeking support to expand this program in 2009, so please consider us in your end-of-year giving!

Drawing: One of the winning submissions by student Max Raúl Cuentas Apaza of Challabamba. Visit our photo gallery to see more submissions.

As ACA’s premier Amazonian biodiversity research station, CICRA, continues to grow, ACA’s new Wayqechas (why-key-chas) Cloud Forest Research Station is under construction at full speed. Jorge Herrera, who successfully administered CICRA in previous years, is now taking the reins as the new administrator at Wayqechas. He plans to have the first three cabins available this April 2006. Three teams are working busily on the cabins, competing among themselves to deliver the best product. The station will receive its first visitors in April.