MAAP #126: Drones and Legal Action in the Peruvian Amazon 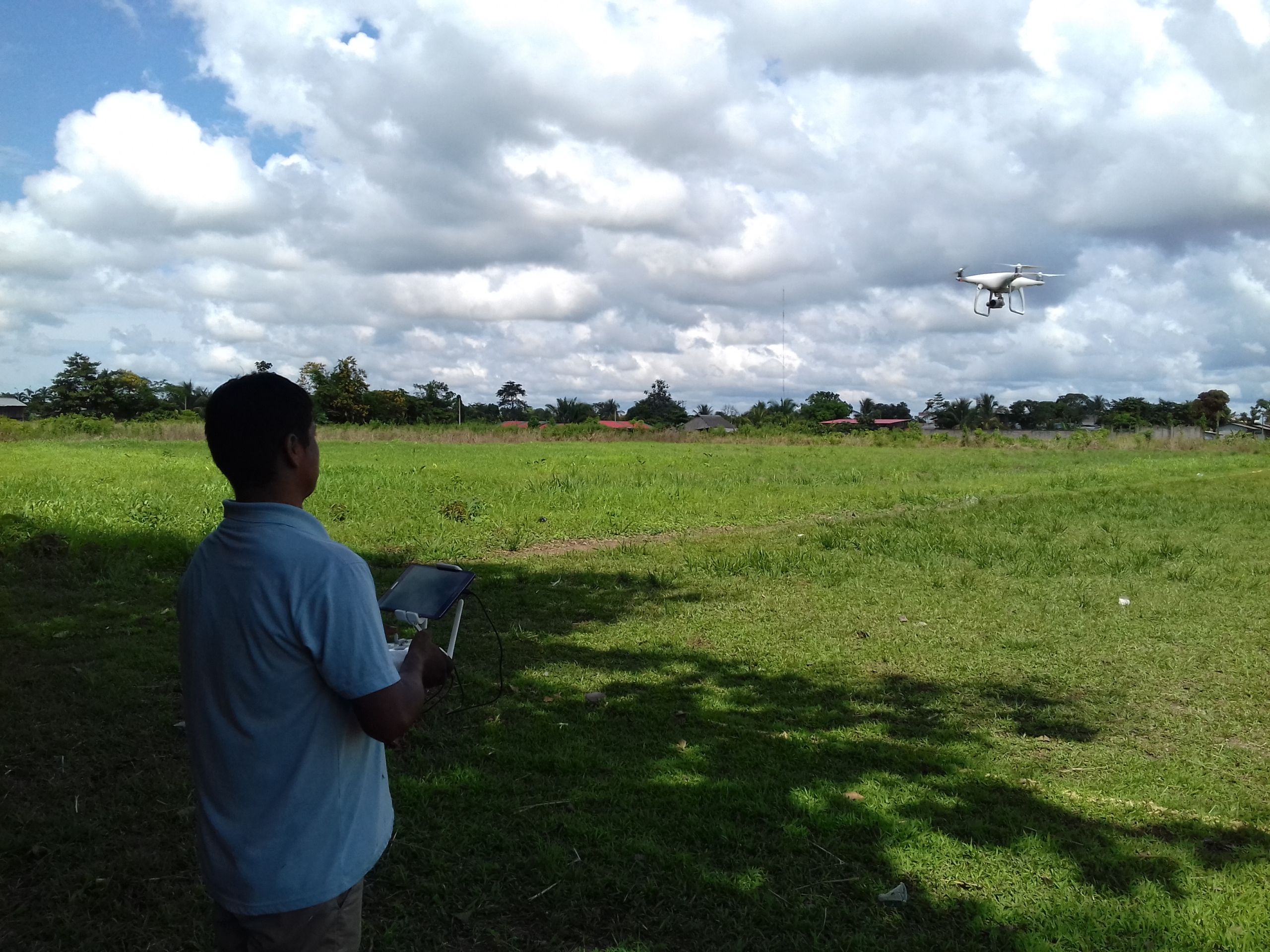 In response, an association of forest concessionaires (known as ACOMAT) is implementing a comprehensive monitoring system that links the use of technology (satellites and drones) with legal action.

ACOMAT was formed in 2012 and now comprises 15 forestry concessions, covering 440,000 acres (178,000 hectares) in the southern Peruvian Amazon (see Base Map). Most of the concessions are alternatives to logging, such as Brazil nuts, Conservation, and Ecotourism.

In the case of ACOMAT, during 2019 they conducted 26 drone patrols and filed 15 legal complaints with the regional Environmental Prosecutor’s Office, known as FEMA. Below, we describe several of these cases.

Note that there is high potential to replicate this comprehensive monitoring model at the level of forest custodians (for example, concessionaires and indigenous communities) in the Amazon and other tropical forests.

Next, we describe four cases where comprehensive monitoring was performed (see Insets A-D on the Base Map). 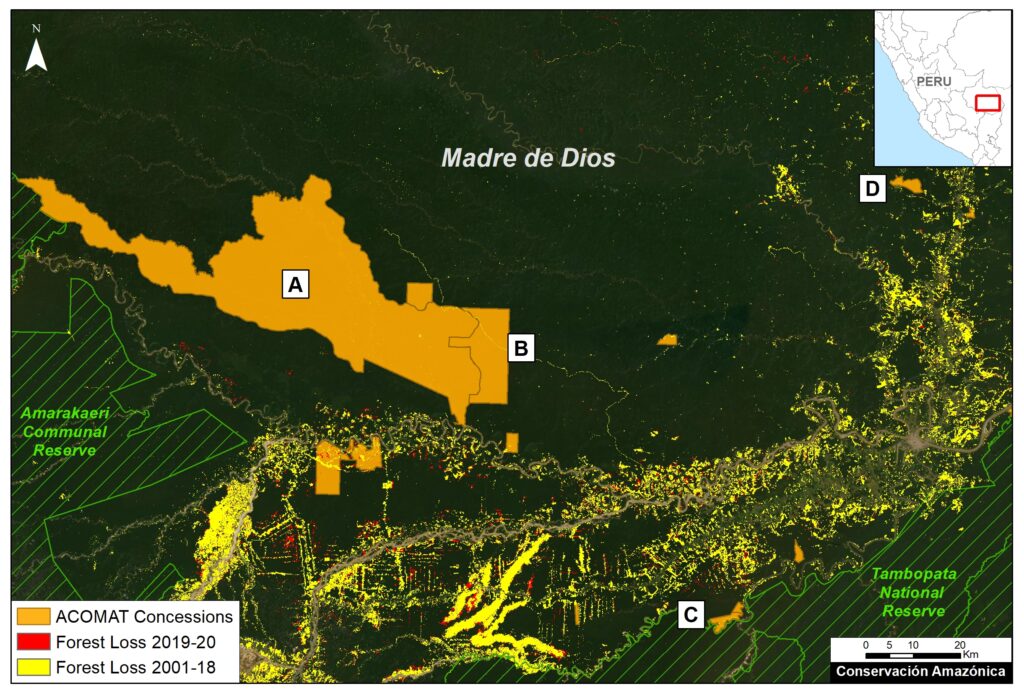 A. Illegal logging in the Los Amigos Conservation Concession

In October 2019, a patrol was carried out to investigate a threatened area within the Los Amigos Conservation Concession (the world’s first Conservation Consession). During the patrol, which included five drone flights, illegal logging was documented, including stumps with sawn trees , paths for the transfer of wood to a nearby river, and abandoned camps. The drone images were added as evidence in support of the previously filed criminal complaint to the FEMA in Madre de Dios. Below we present two striking images from the drone flights, clearly showing the illegal logging. Status of the Complaint: In Preliminary Investigation. 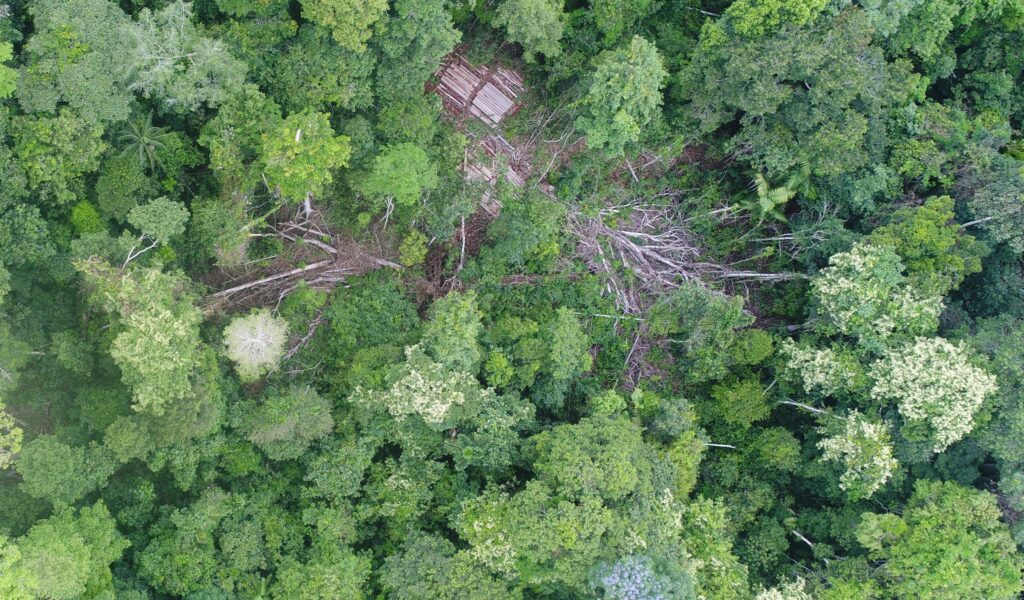 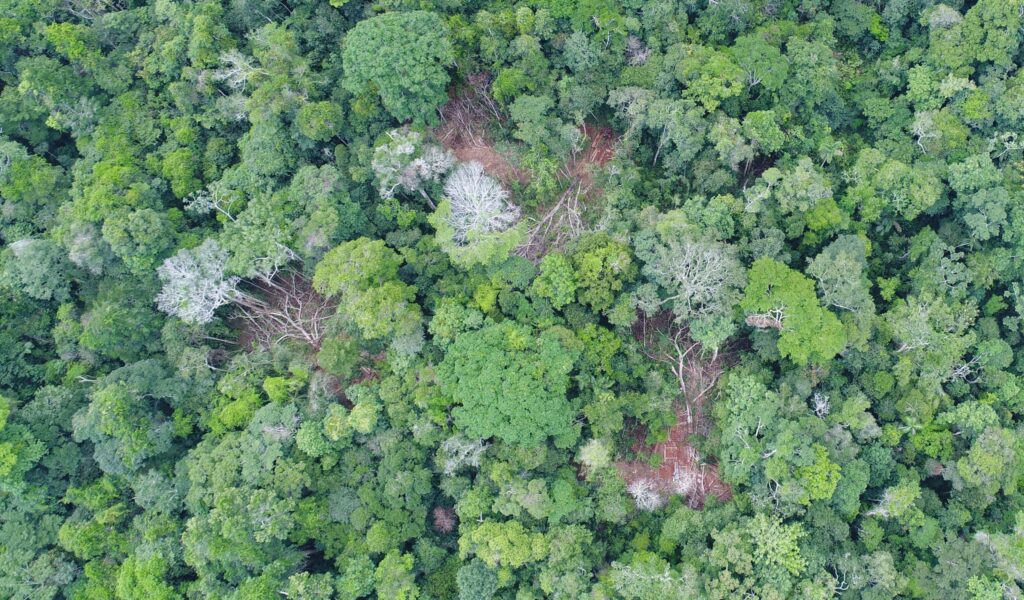 B. Ilegal Logging in the MADEFOL Forestry Concession

In May 2019, a field patrol was carried out to investigate a threatened area within the MADEFOL forestry concession. During the patrol, which included two drone flights, illegal logging was documented, including stumps with sawn trees, a recently abandoned camp, and an access road. With the drone images as evidence, a new criminal complaint was filed with the FEMA in Madre de Dios. Below is an image from the drone flights, clearly showing the evidence of illegal logging. Status of the complaint: In qualification. 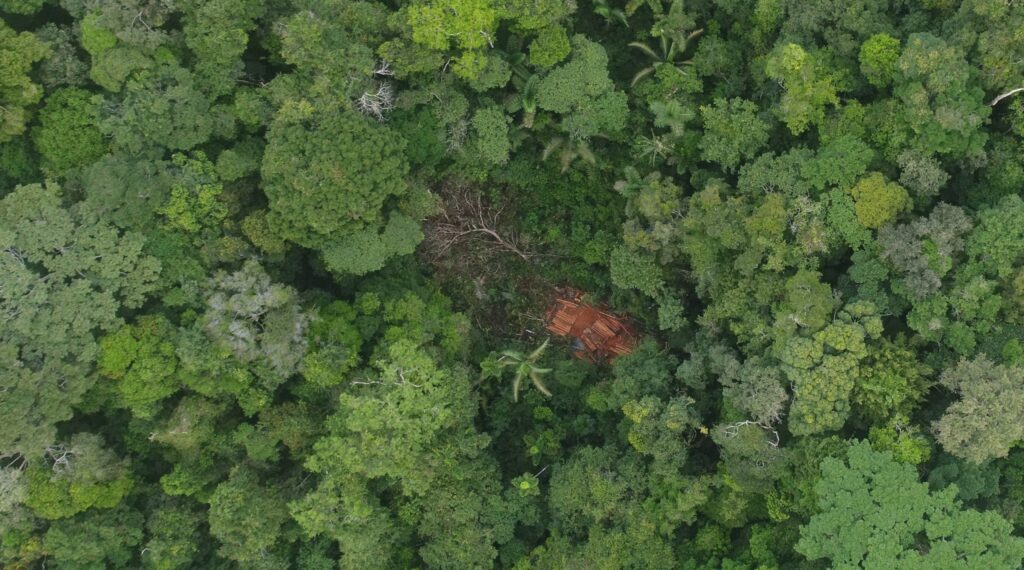 In May 2019, a field patrol was carried out in the “Inversiones Manu SAC” Conservation Concession to investigate an area that had previously been affected by illegal gold miners. During the patrol, which included two drone flights, illegal gold mining was documented in the Malinowski River. With the drone images as evidence, a new criminal complaint was filed with the FEMA in Madre de Dios. Below is a drone image clearly showing the evidence of illegal gold mining. Status of the complaint: Preliminary Investigation. 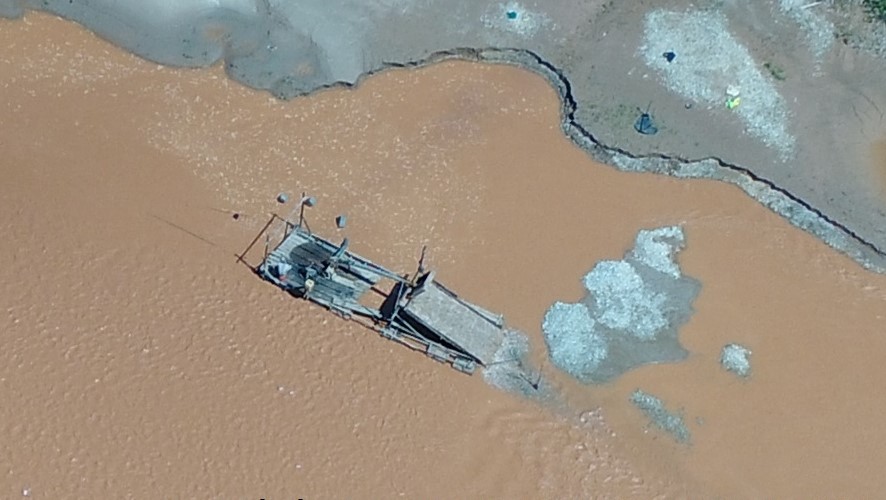 In October 2019, a patrol was carried out to investigate an early warning deforestation alert within the “Sara Hurtado Orozco B” Brazil nut concession.

During the patrol, which included one drone flight, the recent deforestation of five acres (two hectares) was documented. With the drone images, a new criminal complaint was filed with the FEMA of Madre de Dios. It should be noted that this concession was being investigated for a separate illegal deforestation event. Below is one of the images of the drone flight, clearly showing the illegal deforestation. Status of the complaint: In preliminary proceedings. 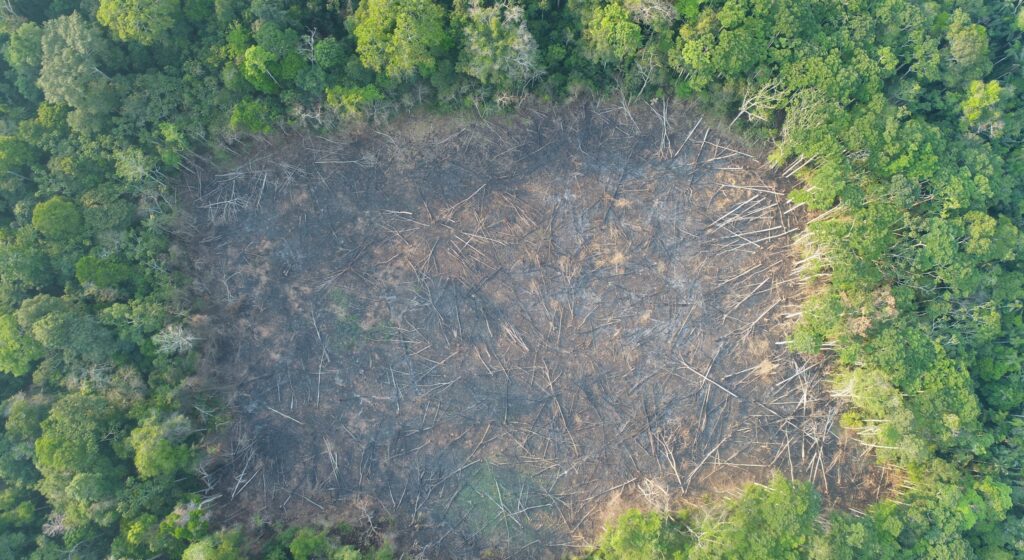 Importance of the “ACOMAT Model”

We have started using the term “Acomat model” to refer to the innovative use of the three elements described above (real-time monitoring, drone flights, and criminal complaints) by the ACOMAT concessionaires.

ACOMAT was created in 2012, and since 2017 has received crucial support from the organization Conservation Amazónica-ACCA, supported by funds from Norway’s International Climate and Forest Initiative (NICFI), led by the Norwegian Agency for Development Cooperation (NORAD).

This project has provided training on all three major aspects, satellite-based monitoring alerts, drones, and the legal process. Concessionaires now receive deforestation alerts to their phones, have the ability to organize and conduct field patrols, and some are trained to perform their own drone flights.

This work was also supported by NORAD (Norwegian Agency for Development Cooperation) and ICFC (International Conservation Fund of Canada).