20 for 20: Photographing the First Recorded Melanistic Jaguar in Bolivia With Camera Traps 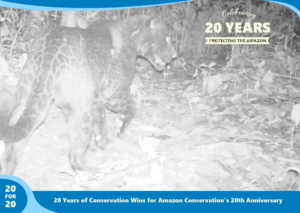 Our camera trap program has been implemented in our areas of work in Bolivia since 2015. We have camera traps placed in:

These places have successfully managed to register a wide variety of wild species, and have even photographed a very unique melanistic jaguar (Panthera onca). This is a color morph which occurs at about 6% frequency in jaguar populations, giving it an almost “black” look that is a stark contrast to the species normal orange/ brown complexion. This is the first time this type of jaguar has ever been recorded in the entire country of Bolivia.

Additionally, our camera traps have recorded evidence of animals which had previously been declared as no longer living in the area, as well as ones that have been categorized as endangered, near-threatened, or vulnerable by the internationally-recognized IUCN Red List of threatened species, including endangered giant otter (Pteronura brasiliensis), near-threatened jaguar (Pantera onca), bush dog (Speothos venaticus), and harpy eagle (Harpia harpyja), as well as the vulnerable white-lipped peccary (Tayassu pecari) and South American tapir (Tapirus terrestris).

This story is part of a series commemorating our 20th anniversary protecting the Amazon. We’re celebrating this milestone with a look back at our 20 biggest conservation wins over the past 20 years. Click here to support camera trap conservation programs in the Amazon.